At first glance you might not think that this set up is appropriate as it looks like a little girl's room. The original design made this like a crafting room bedroom or like a young teenage girl. At least that was the impression to me. The pink laptop and bunny slippers definitely give it that impression. However, I wanted a bedroom and I loved that door and desk, so I bought and did some extra work on it to suit my needs. 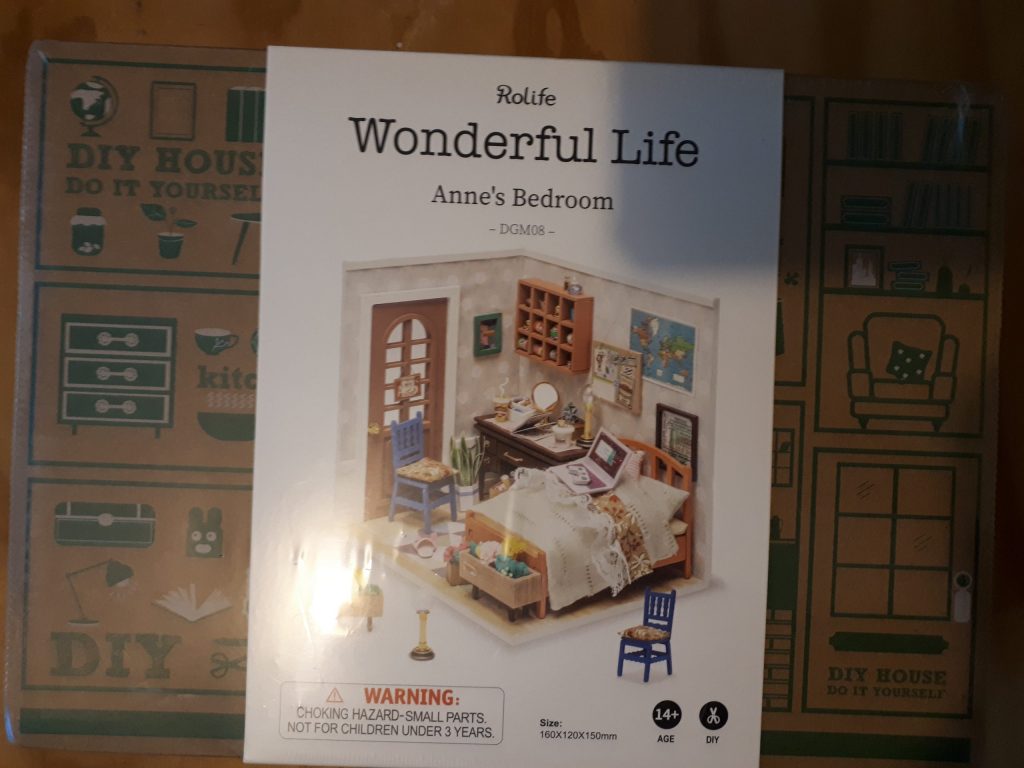 What I was thinking was an office for Najeed in my IOM diostory, but it was a room that he also slept in. Heck anything to get away from sleeping in the barracks with the rest of the guys was a step up. 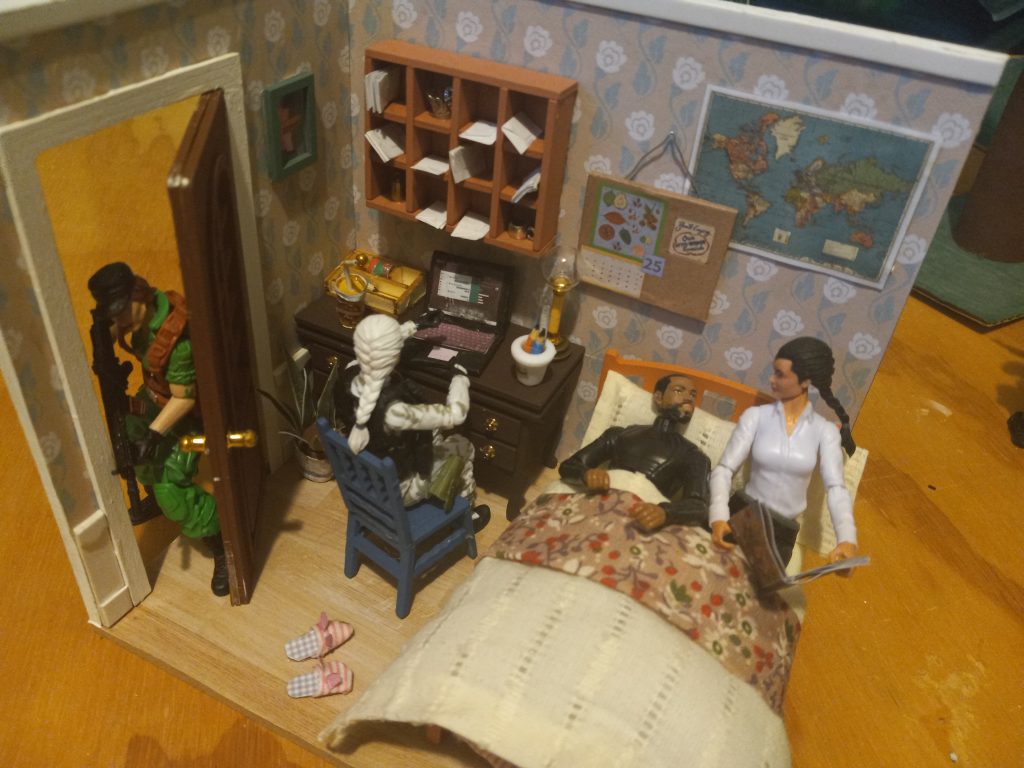 I've just taken some silly shots to give you an idea. Originally you were supposed to put some paper on the desk but I did away with that so that we could see the wood. Then in the cubby I created a bunch of fake envelopes and stuck them in there instead of using those little tape rolls. There were way too many tape roles. This way it looks more like he's keeping track of letters for the mercenaries and their payroll. I also painted the laptop black, but I screwed up the screen a little so the bottom looks weird. 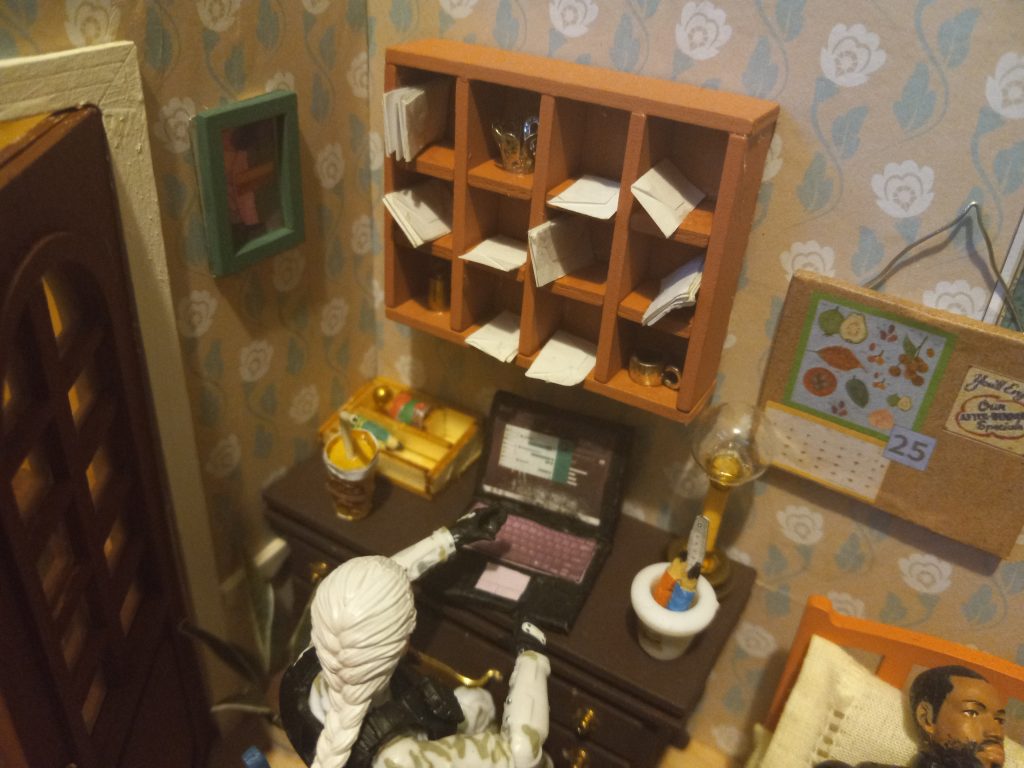 There's a closer shot of the cubby and the desk. Unfortunately the desk is built a little too low so you can't stick a figure's legs underneath the desk. I think the set is modeled for 1/24 scale, but then that door is crazy tall. 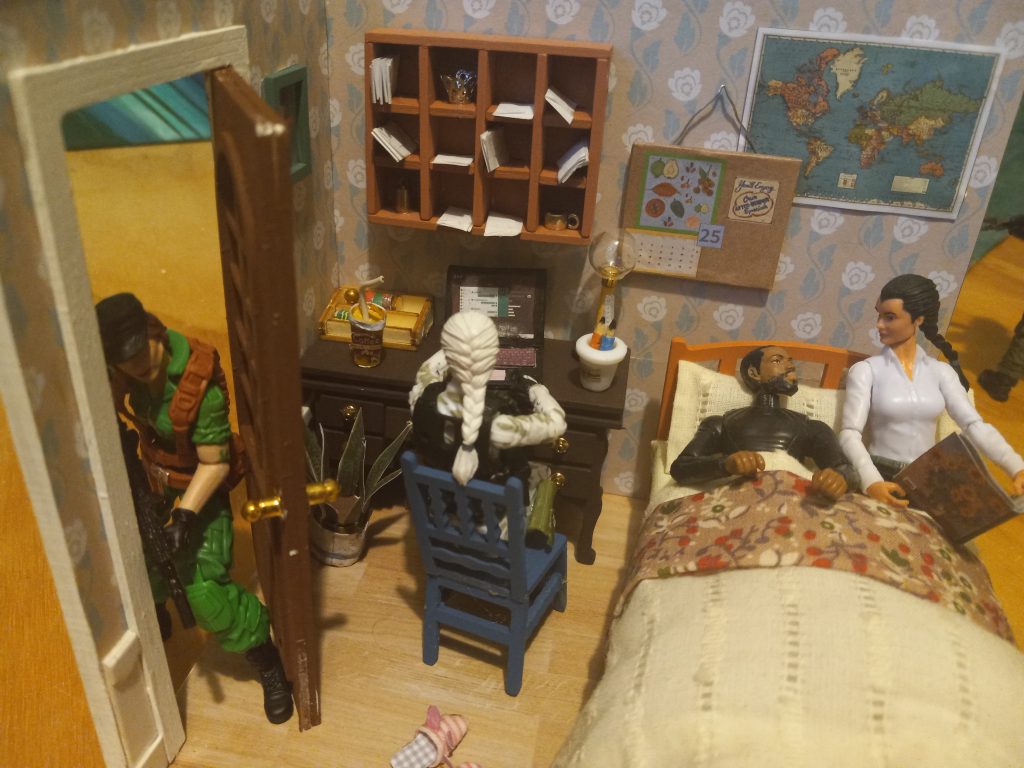 With the right angles the door can look like the right scale, but as you can see it's even too big for 1/18 scale. These sets are always off a bit in certain places. I always determine if these pieces are going to work by using any doorways or doors as the frame of reference. So far so good. Now I didn't glue the door in place, but I did have it closed and so scraped off some paint when I reopened it. Will have to touch that back up. I didn't want to glue the door in place so I could shoot scenes with someone coming into the room. Did I mention I love the door? 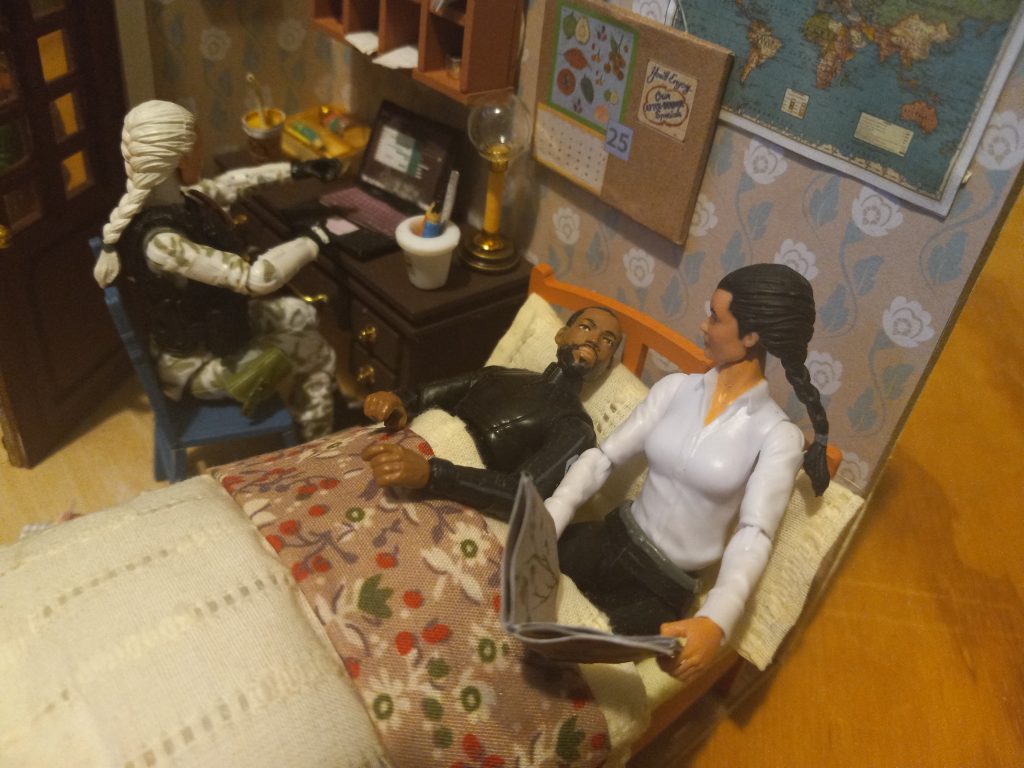 If that were a real bed it probably would be too small for two people, but I managed to squeeze them in. The original set up added a lace frill to the duvet, but that would've killed the look I was going for so I didn't add it. I also didn't add a lot of flowers to the room, but I did complete them. I'll just use them in different scenes instead. I did have to glue the duvet to the bed, but then just propped it up a bit so that I could still figures inside it. Not sure how many bedroom scenes I'm going to have, but I wanted to have the option at least. 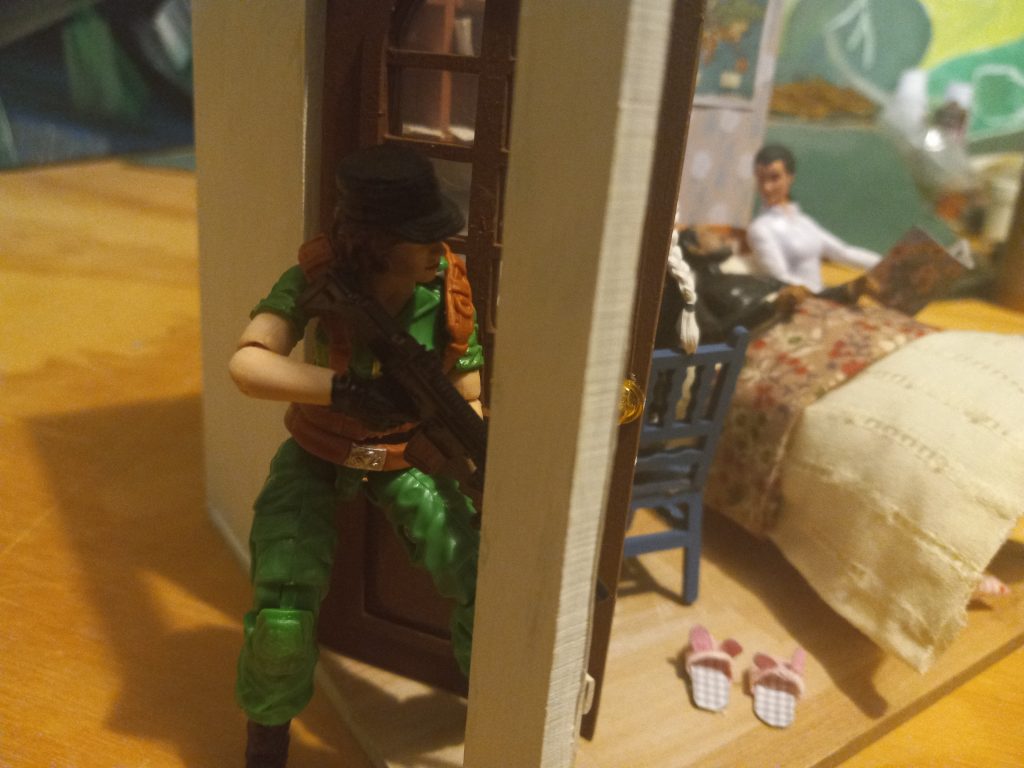 I did make the bunny slippers but there's few figures with bare feet and it seems strange to put bunny slippers on top of combat boots. Still they were worth a laugh to put together. The directions for this set are fairly straight forward. There's perhaps not quite enough glue if you are an overzealous gluer, so you may need to get some more. There is a lot of paper stuff to glue together and so you could use any kind of white glue for that. The paint quality was not great in this set either. I painted white on the walls with three coats and it still wasn't very good so I used a random white paint and that was much better. You are also supposed to mix the paints together to get the door and the table colours, but you need a third container to mix it in. I decided just to use the single dark colour on the table and used another brown paint I had for the door. 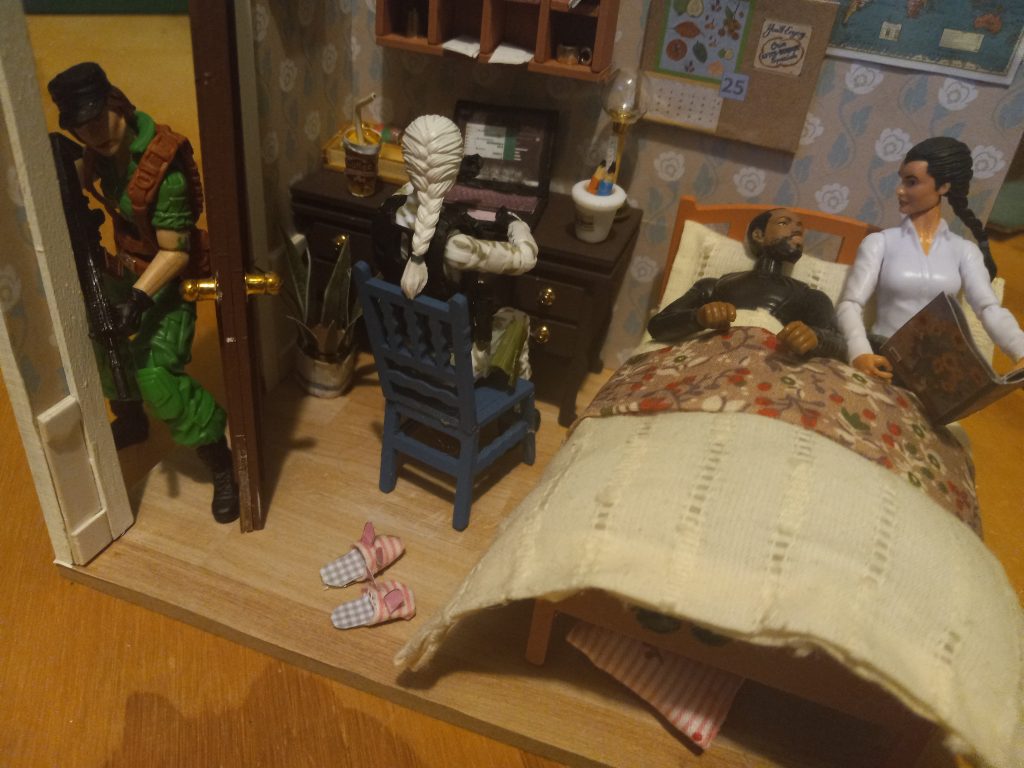 Depending on how you want this scene to look will determine how much it ends up looking. I think the small changes I made, makes it look less like a girl's bedroom and more generic. It's certainly a nice doll house kit and includes some nice pieces.