As a GIJOE collector (which you may also be) I've often had to defend what I play by saying that they are 'action figures' and not 'dolls' well with my latest purchase I fear I have crossed the line into doll territory. Perhaps I am not as manly as I once thought. 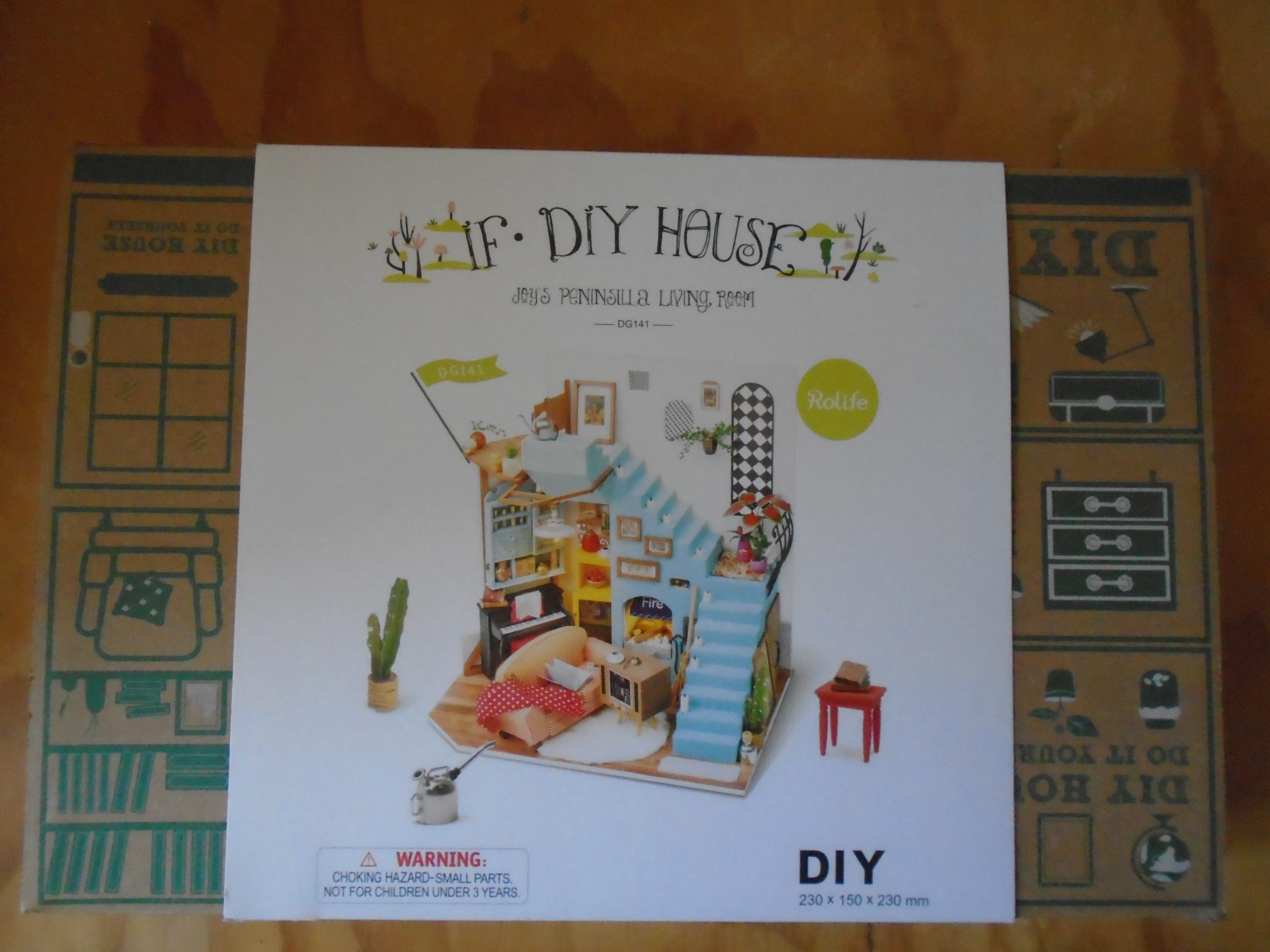 You know I came across these on the BigBadToyStore website, but I did buy it from Amazon since shipping was cheaper (and faster). I had been wanting to spruce up some of my scenes in the diostory I've been working and I thought this would be a good piece. There's a lot of loose pieces that can be used like the couch, tv, cabinets, piano, etc. 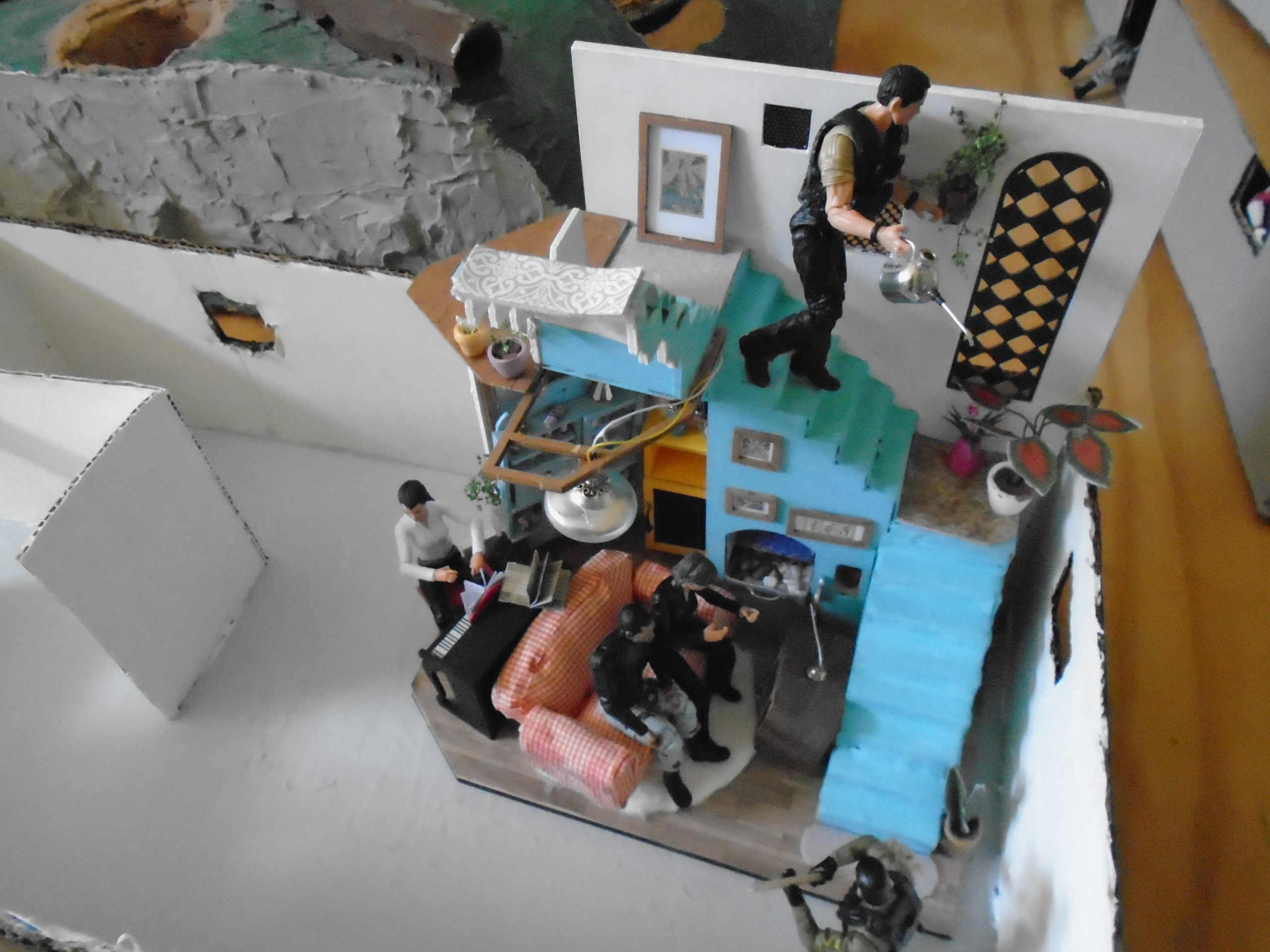 I also planned to use this particular piece in another house I had assembled just never got around to painting. So this would be the stairway to get up to the second floor and ultimately the third floor too.

Now the scale is approximately for 1/24th not 1/18th, but there are a lot of pieces where the scale makes no sense in its original form and so I did make adjustments to make it more 1/18th scale. 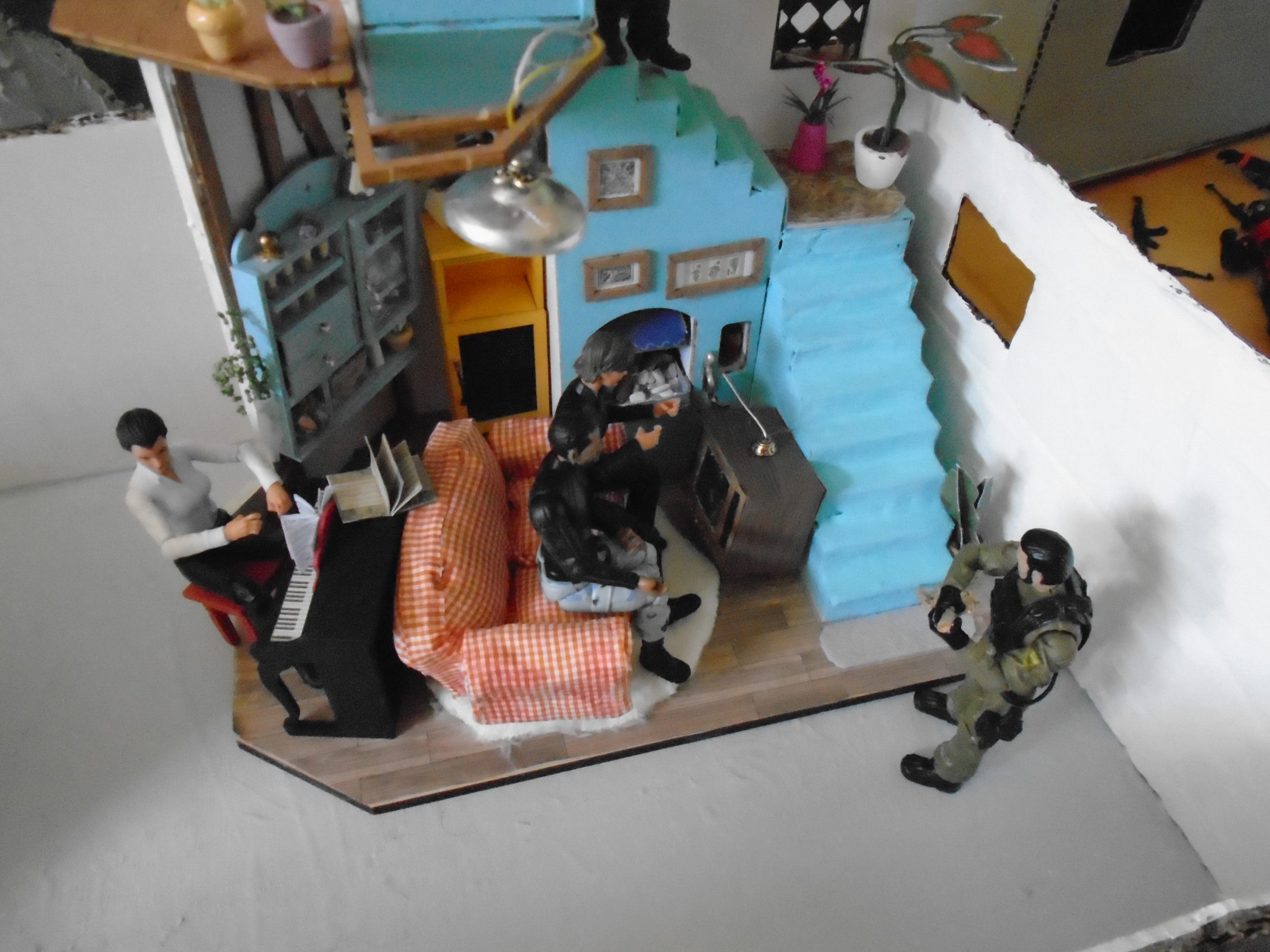 The stool for the piano had legs so long you couldn't actually get a figure to fit their legs underneath the piano. So I trimmed those down and now it's a perfect size for 1/18th if you think of it as a player piano. 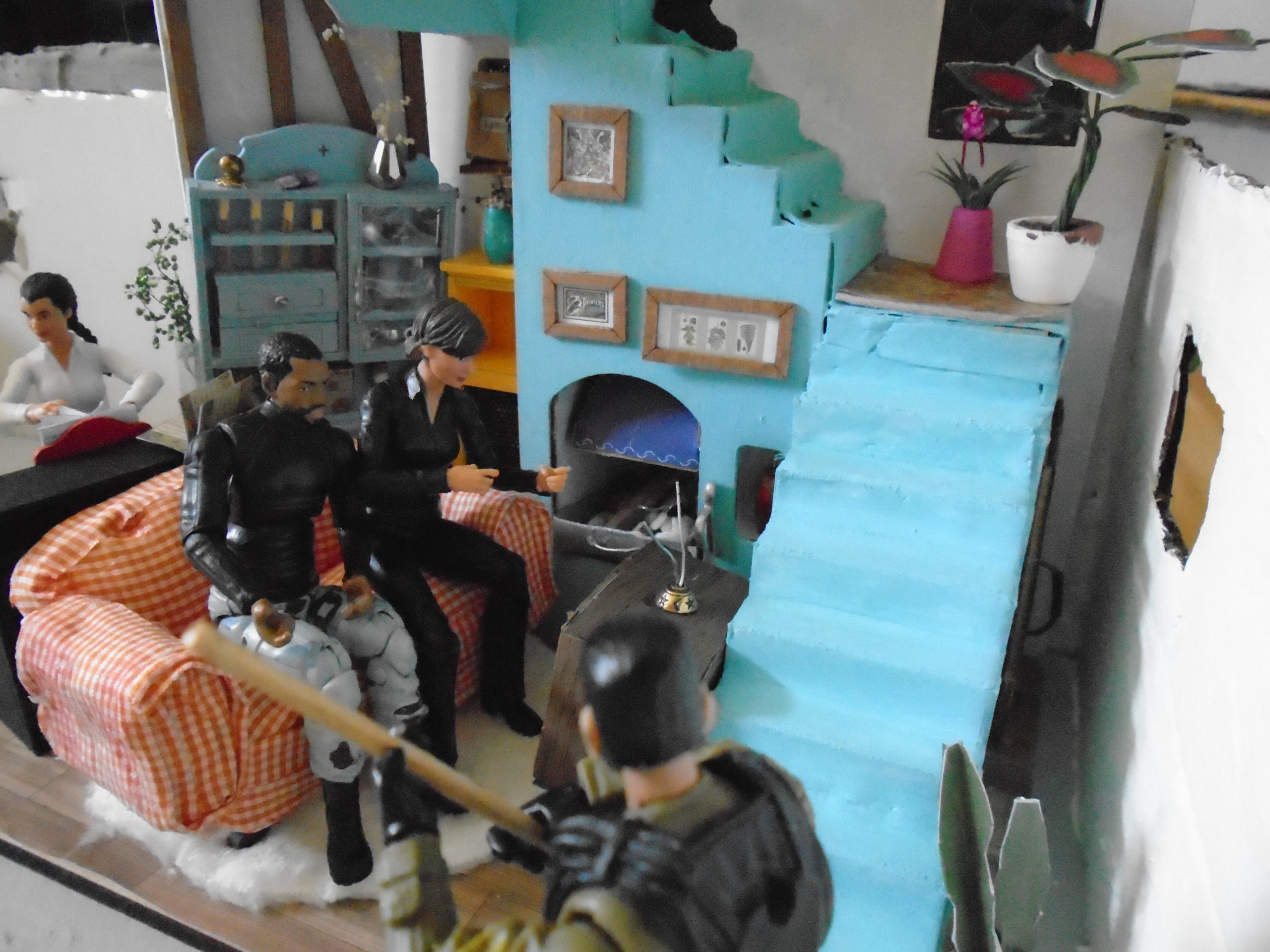 The broomstick was originally much thicker, so much so it wouldn't fit in 1/18th figure's hands. So I used a more slender stick as the mop and now it fits perfectly. It's about the thickness of a toothpick, you got more slender skewers, that would work too. 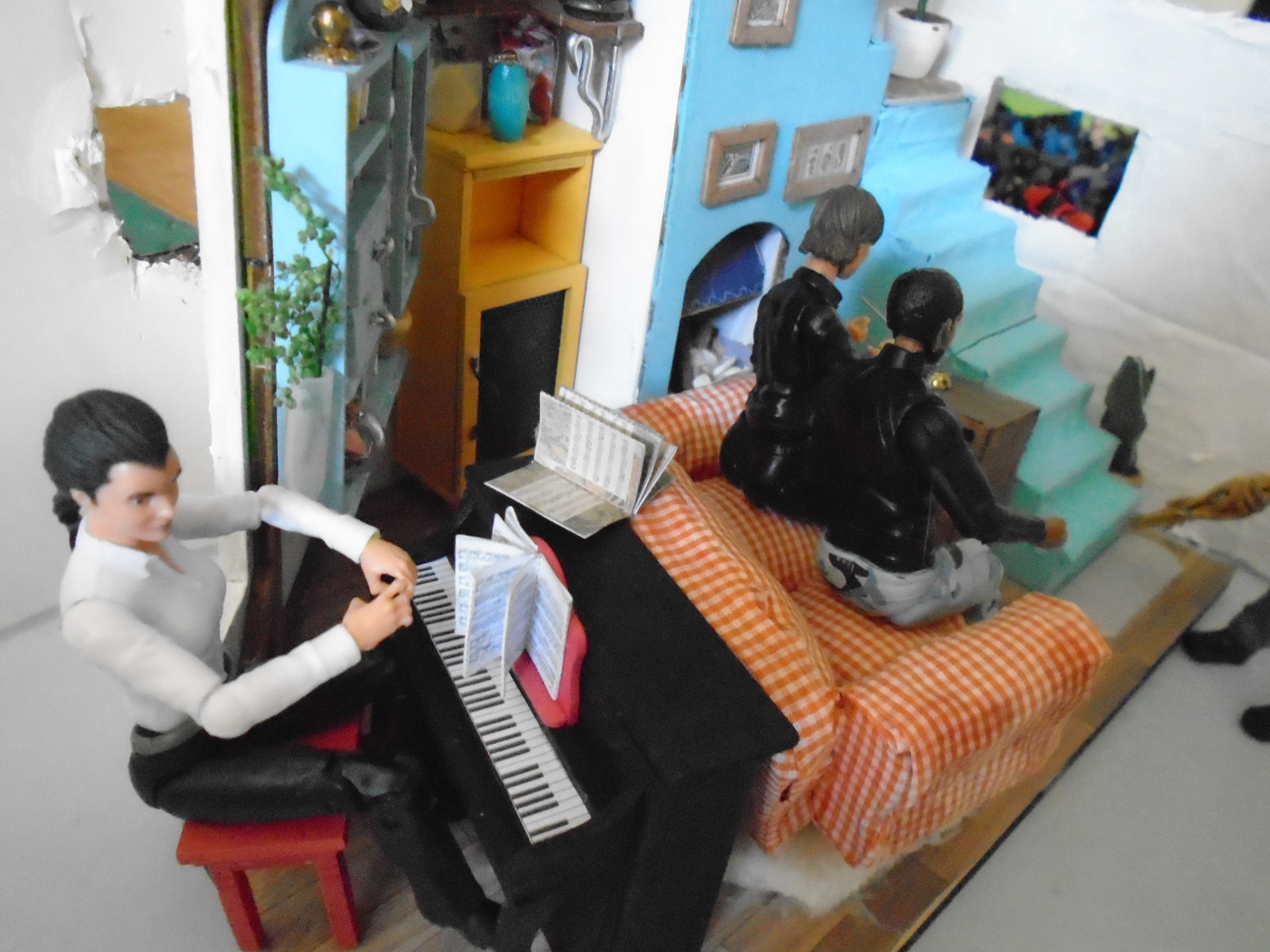 That blue cabinet is only taped on in this picture, but it keeps falling off. I didn't want it to be permanently on this structure only, but it is pretty heavy, maybe it needs better tape or just to glue it to something vertical with a stand that can be moved around.

That plant that's stuck on the side has that green plant material, which is pretty realistic looking and they provide you with way more material than you need to make the plants in this set, so definitely something you can use in making other scenery pieces. 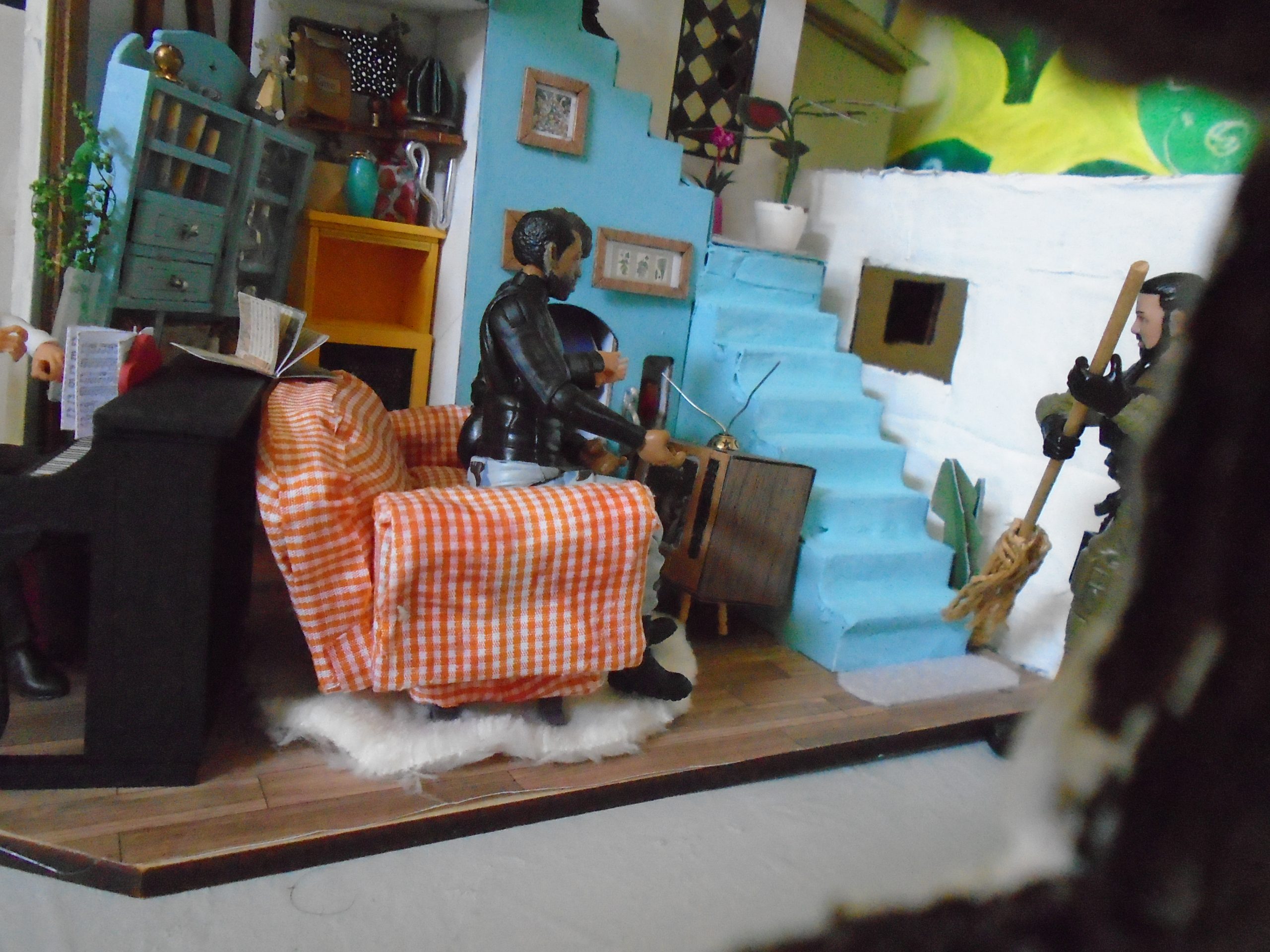 I didn't show it in this picture but behind that rectangular shaped painting is a hole in the wall, which is supposed to have some decorations in it. Instead I've just tapped the painting over the hole and it can become a hiding place for a handgun. Note how the blue cabinet is leaning over now, cause my tape wasn't good enough. 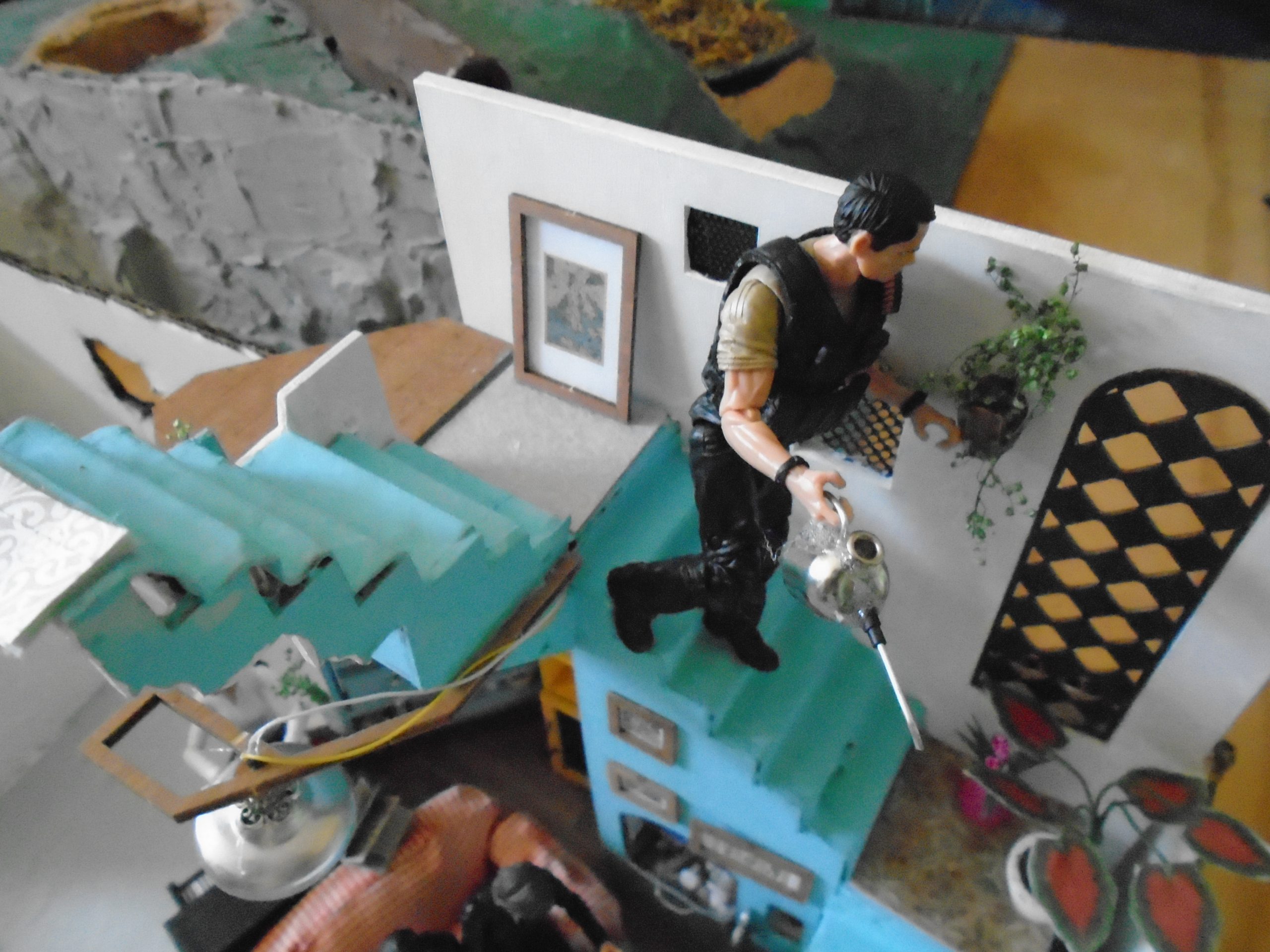 The Marauder figure looks like an absolute giant on those stairs, but he is ideal for reaching those tall plants.

I guess I haven't really reviewed the set. Overall I would say its good. The scale though 1/24th is flexible for 1/18th. The instructions are mostly pretty clear. It does include glue, paint, twezers and batteries for the light. (I'll try to add a picture with the lights on later)

There's some leftover materials, which you can use for other things. Even just making it might give you some ideas about what else you can make. Like I never considered making my own cots until I put that couch together and realized that the glue holds fabric quite well. Though if you put too much glue on it stains through the fabric making it darker, so watch out for that.

Some instructions don't quite give you enough information, particularly with the wiring. If you aren't familiar with heat shrink wrap you may not know that you can just use a lighter to generate enough heat to cause it to shrivel up, just don't get the flame too close.

I am a bit sloppy at putting these things together (and it was my first time, geeze) so you'll likely do a neater job of it than me. If anything this is the worst it can look. If you have any questions, feel to free to ask. I bought another one of these brand of sets and will post another review when done.