So if you are going to have stories about soldiers and mercenaries, at some point or another you're going to need a bar. Bar's serve multiple purposes for socializing and stress relief and also so that some can forget their troubles. I came across this dollhouse kit by Rolife and considering my past success with their products I thought that this would be a good fit. Overall I am happy with it. For whatever reason the one they sent me was in Mandarin and so I couldn't read the instructions, but since it has detailed pictures to follow along it wasn't that hard. I probably screwed on a few parts maybe because of now having proper direction or perhaps because I was just hasty. 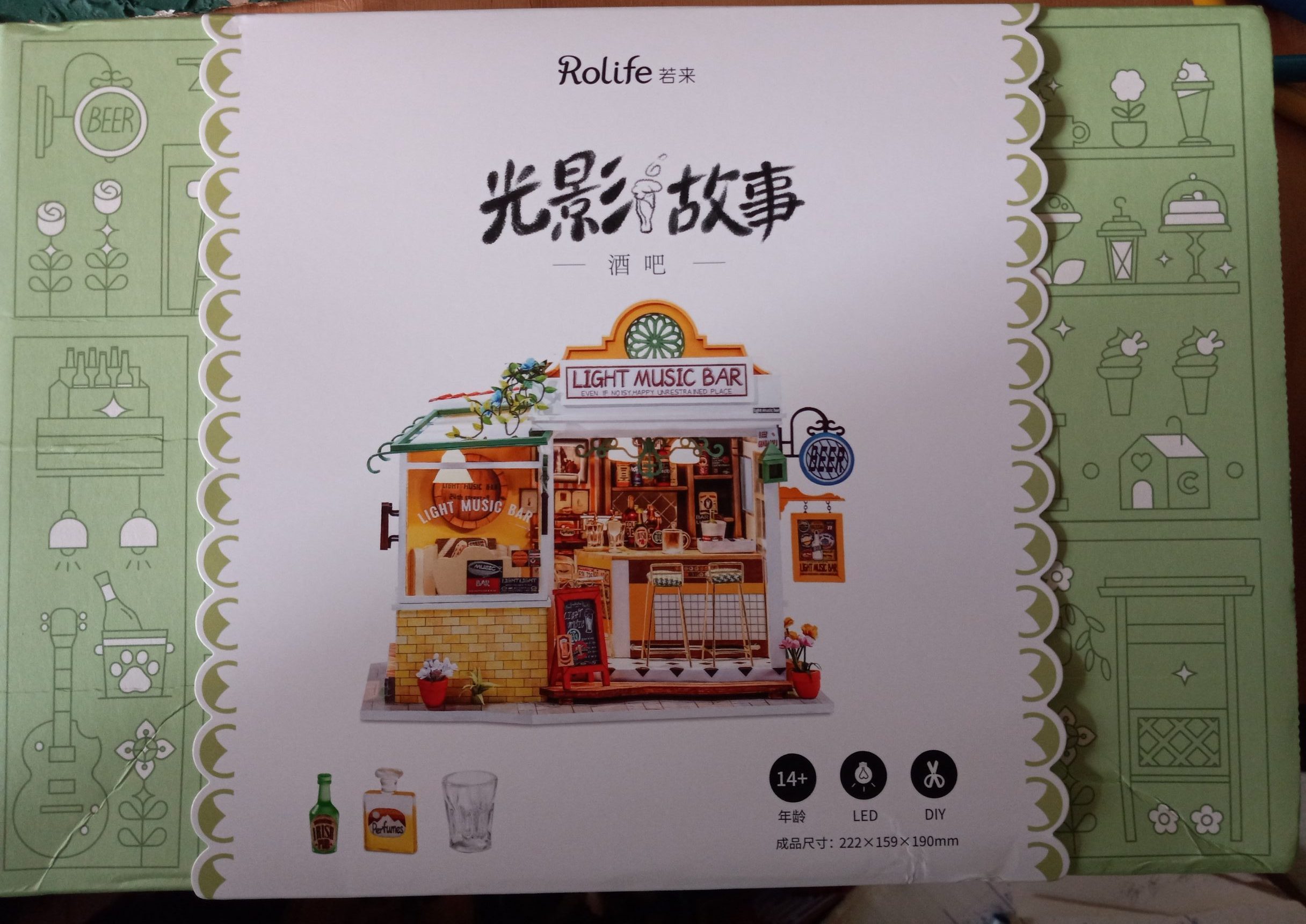 The first thing I knew I had to change was the bar name. So the actual bar name says 'Light Music Bar - Even If Noisy Happy Unrestrained Place' obviously whoever does the English translation for their signs didn't understand why that would sound silly. Since I planned on using different names I just wrote different bar names on a piece of paper and stuck it on the wood with that wall tack stuff so I could take it off and add a new one whenever. One bar name like below I called 'The Hole'. 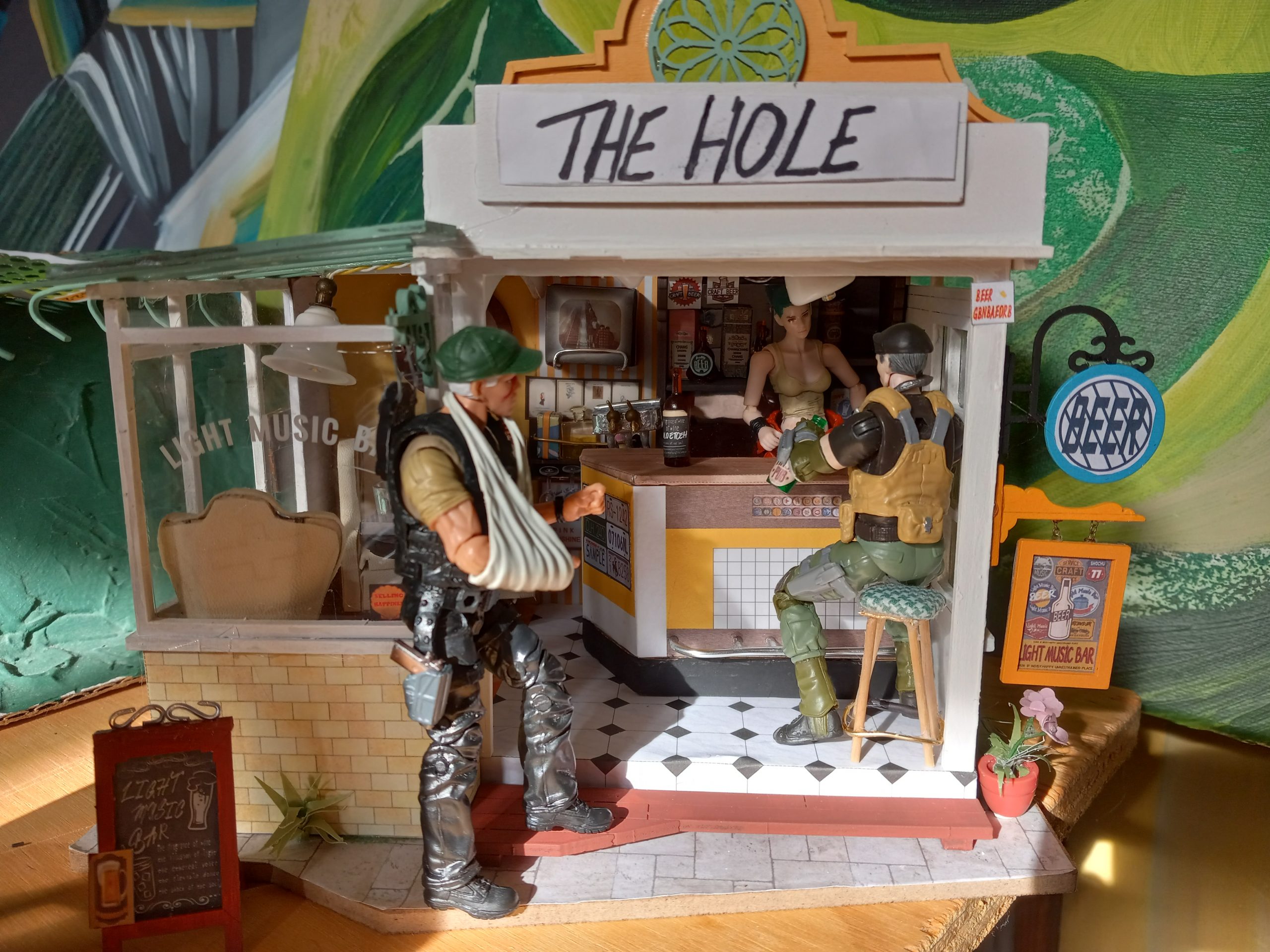 Like Rolife's other DIY Dollhouse kits this one is set in 1/24th scale, but with a few adjustments I made it work. The first thing I noticed was the bar itself, it was just too low for 4 inch figures. So I added a bit of wood down at the bottom and then glued paper onto it which I painted black. I think it turned out all right. 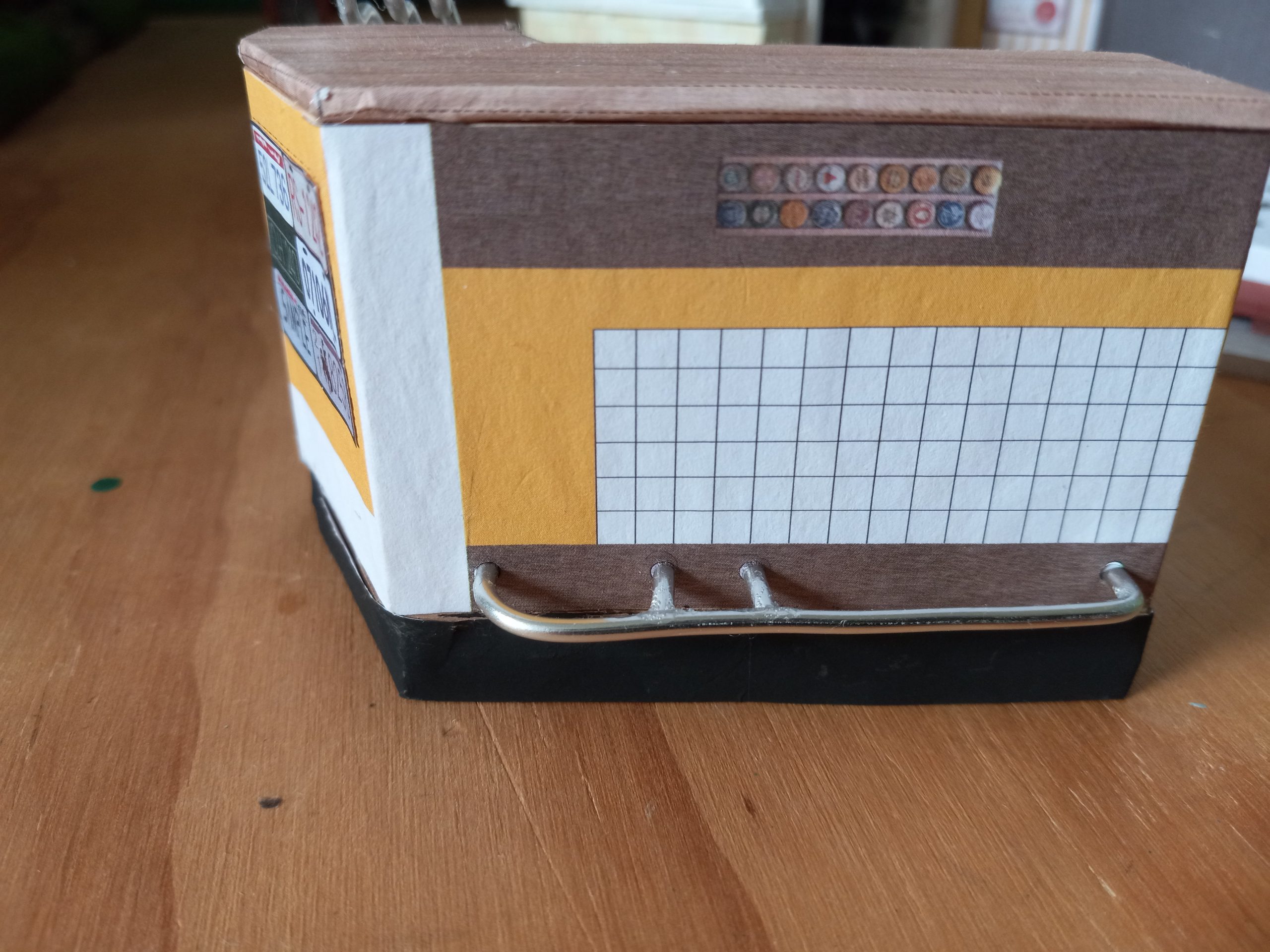 But it does look a bit rougher round the back. I just added 1 cm thick wood (0.4 inches) to increase the height just enough so that it would go up to the waist of the fingers. 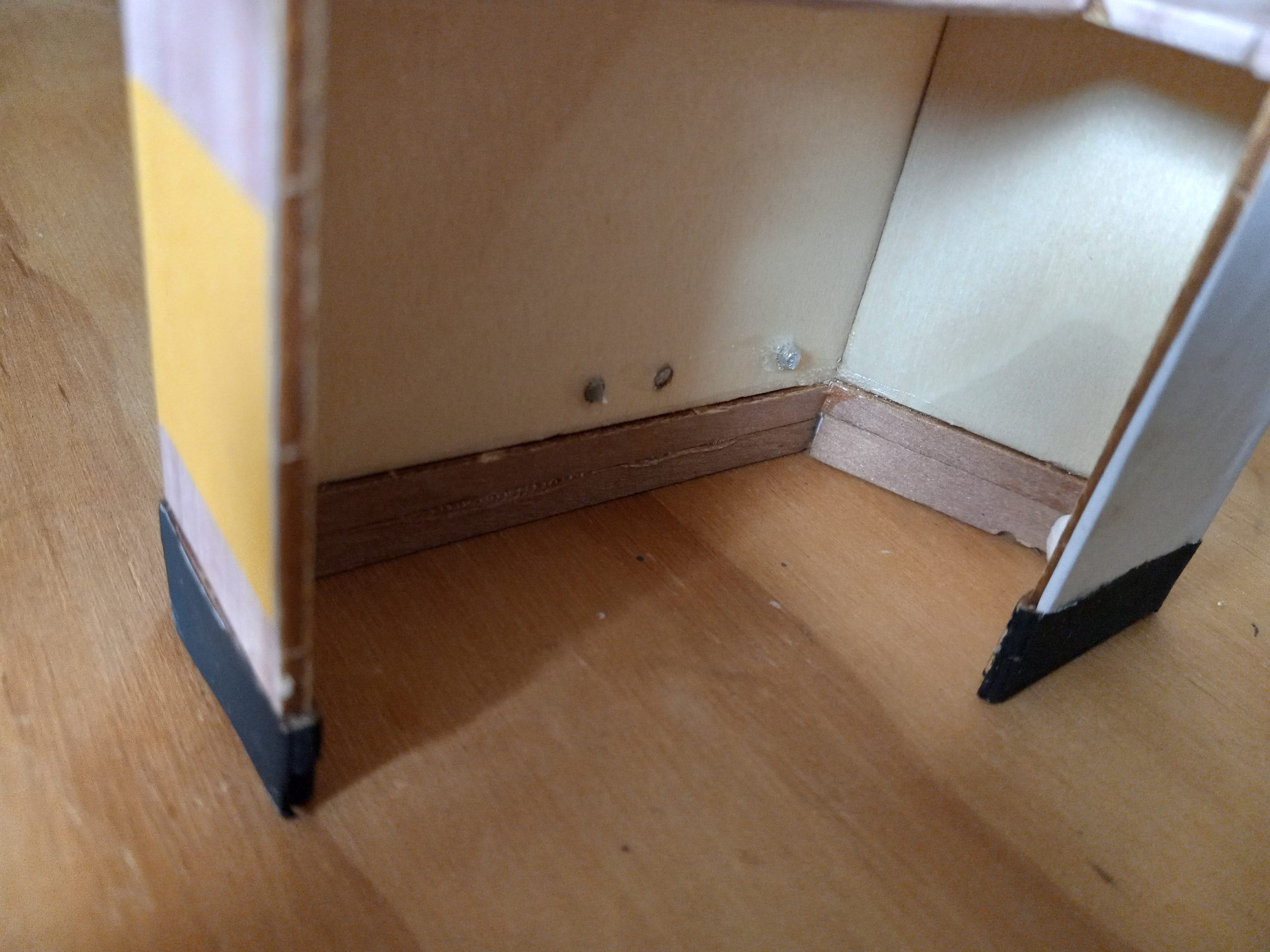 I like the little bar taps too, but they are quite fragile. Those mugs are a great size and fit 4 inch figures just right. 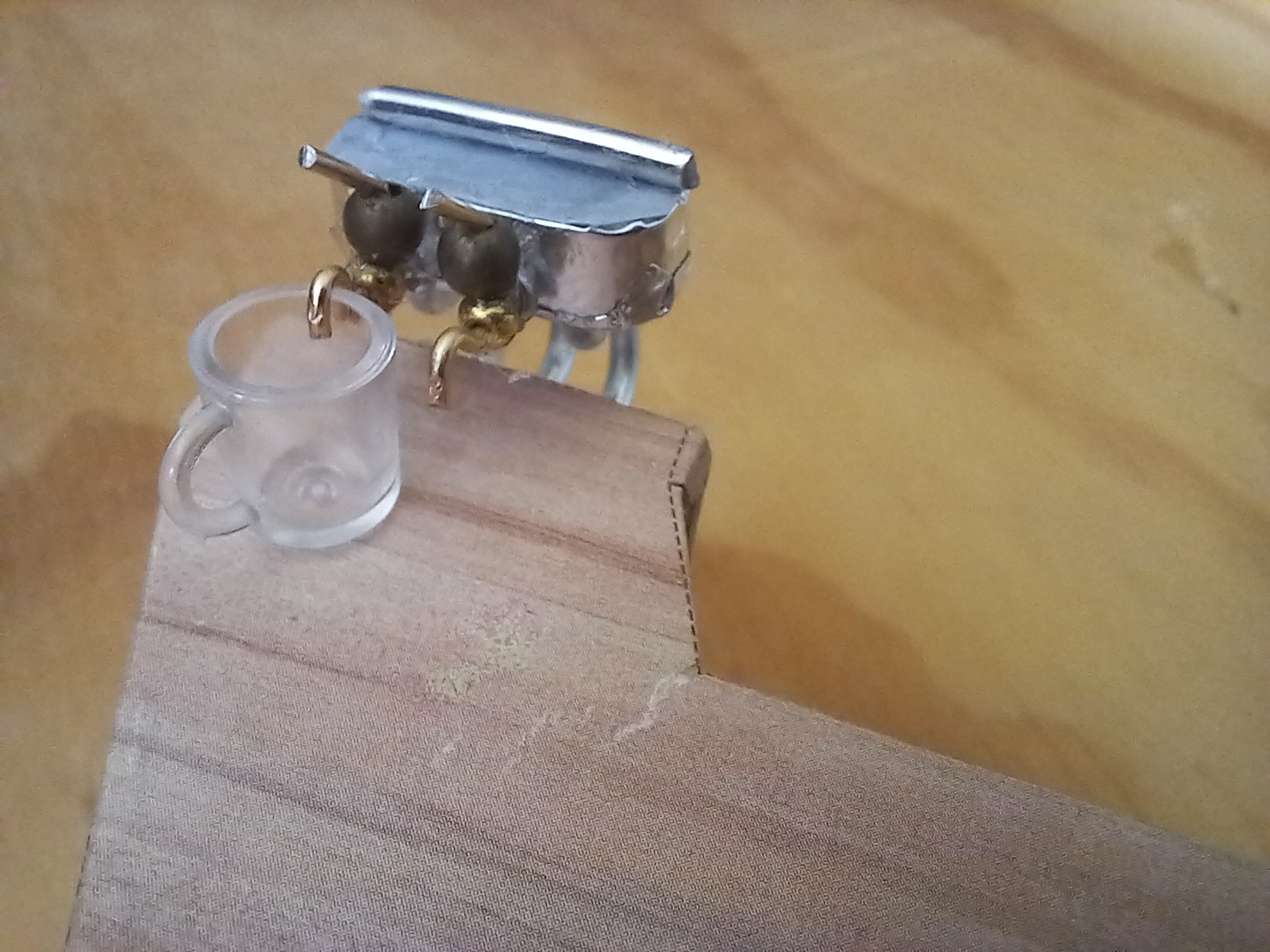 Then here's the back of the bar. The shelf looks quite good. You don't have to paint it thankfully. The beer bottles are also a good size, honestly I think they're a bit big for 1/24 scale, which suits 4 inch figures just right. The wine glasses are a decent size too, but I just kept them hanging off that rack. I didn't glue them down though so I could potentially use them for something else later. 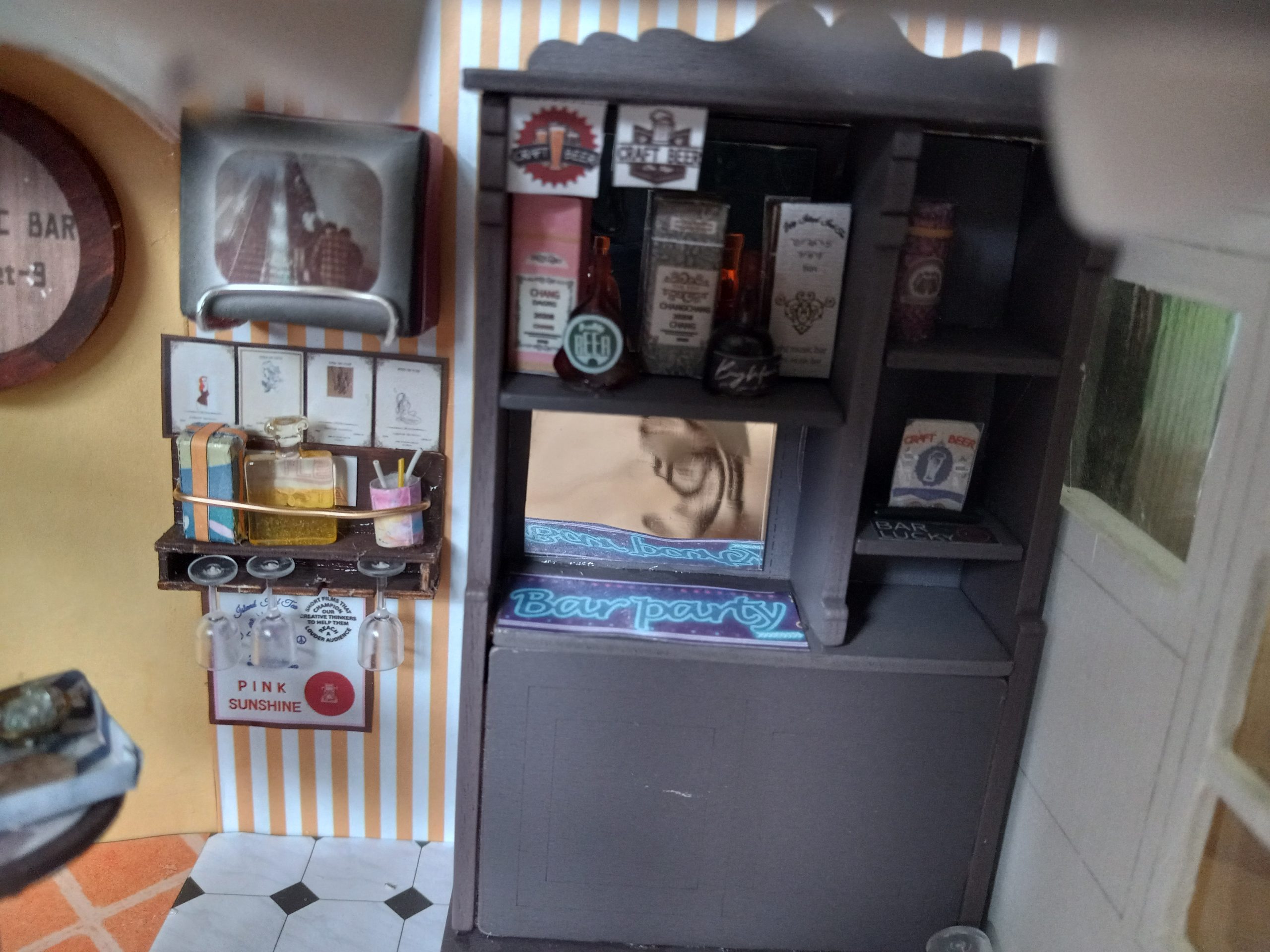 The stools were supposed to be made of this very soft gold wire, the same stuff that's around the bottom legs of the stool, but it was just too soft. I tested a figure on it and the metal would bend. At first I was thinking I shouldn't bother with the stools at all since I have those white ones from another set, but I really liked the checkered pattern. So instead I just used toothpicks as the legs and I used a heck of a lot of glue to hold it all in place. They aren't pretty, but they are sturdy. I also made them a bit longer too. 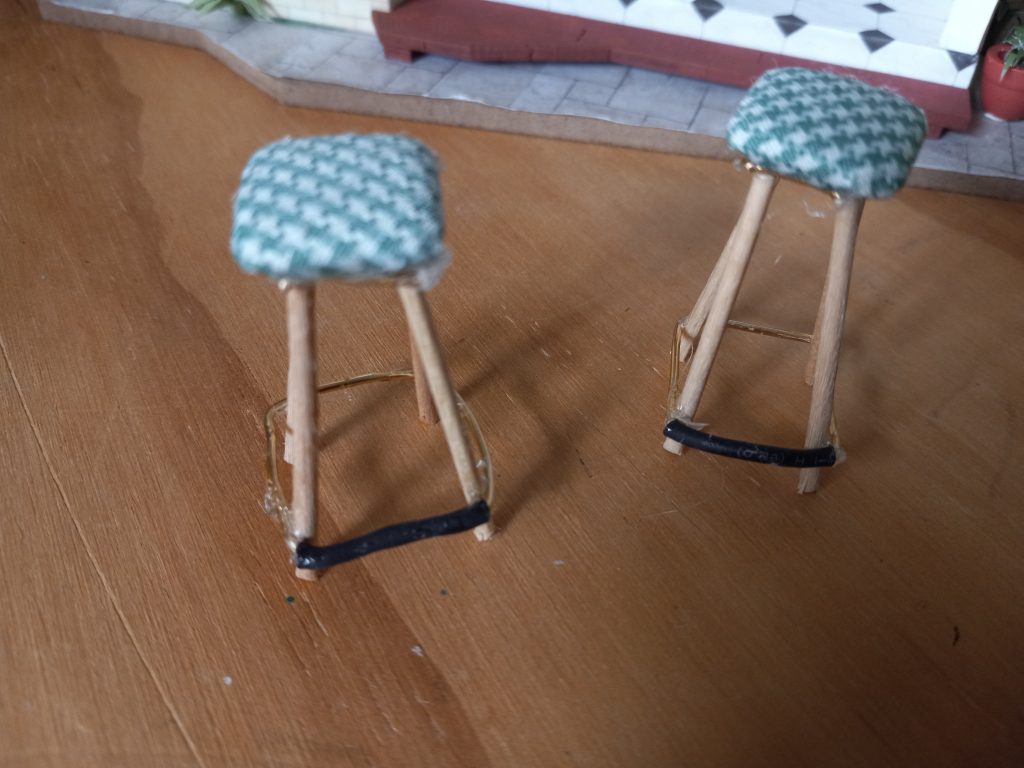 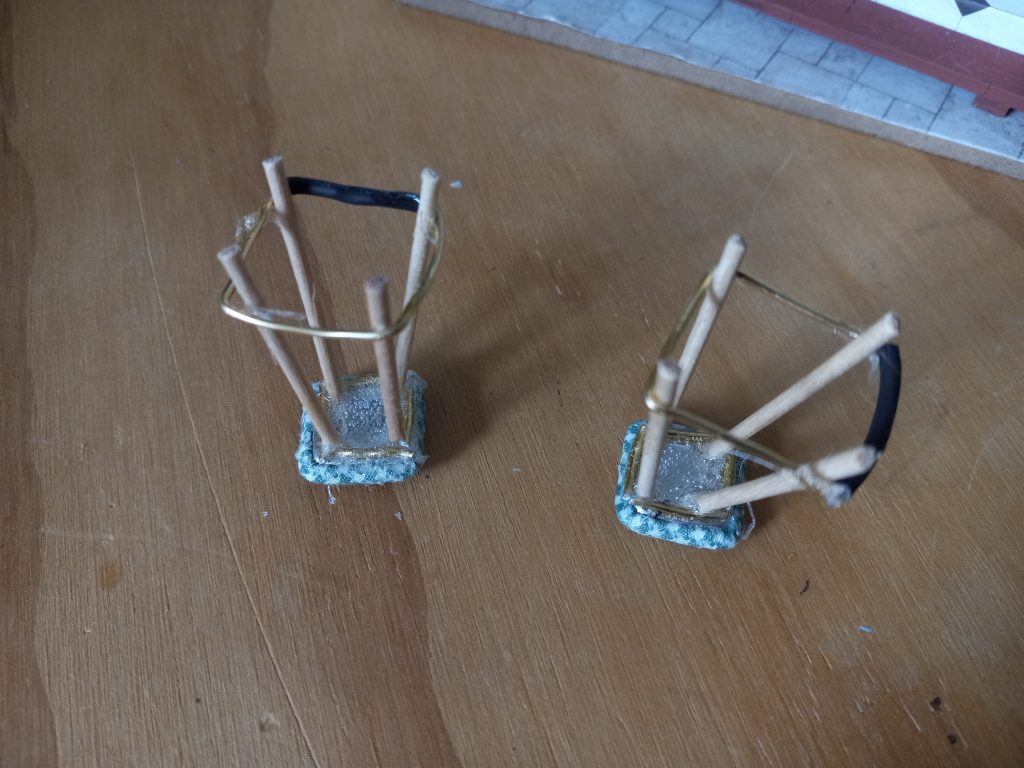 For the couch and chair they too appeared to be a bit small and low. So first I added some wood to the bottom of the couch to lift it up a bit and I also added a bit of wood to the chair in the middle so that it would sit up higher. I also decided to remove the arm rests to the chair because that really limited the figures that could sit in the chair, but without arm rests that wasn't a problem. They aren't pretty, but that's probably my own workmanship quality. 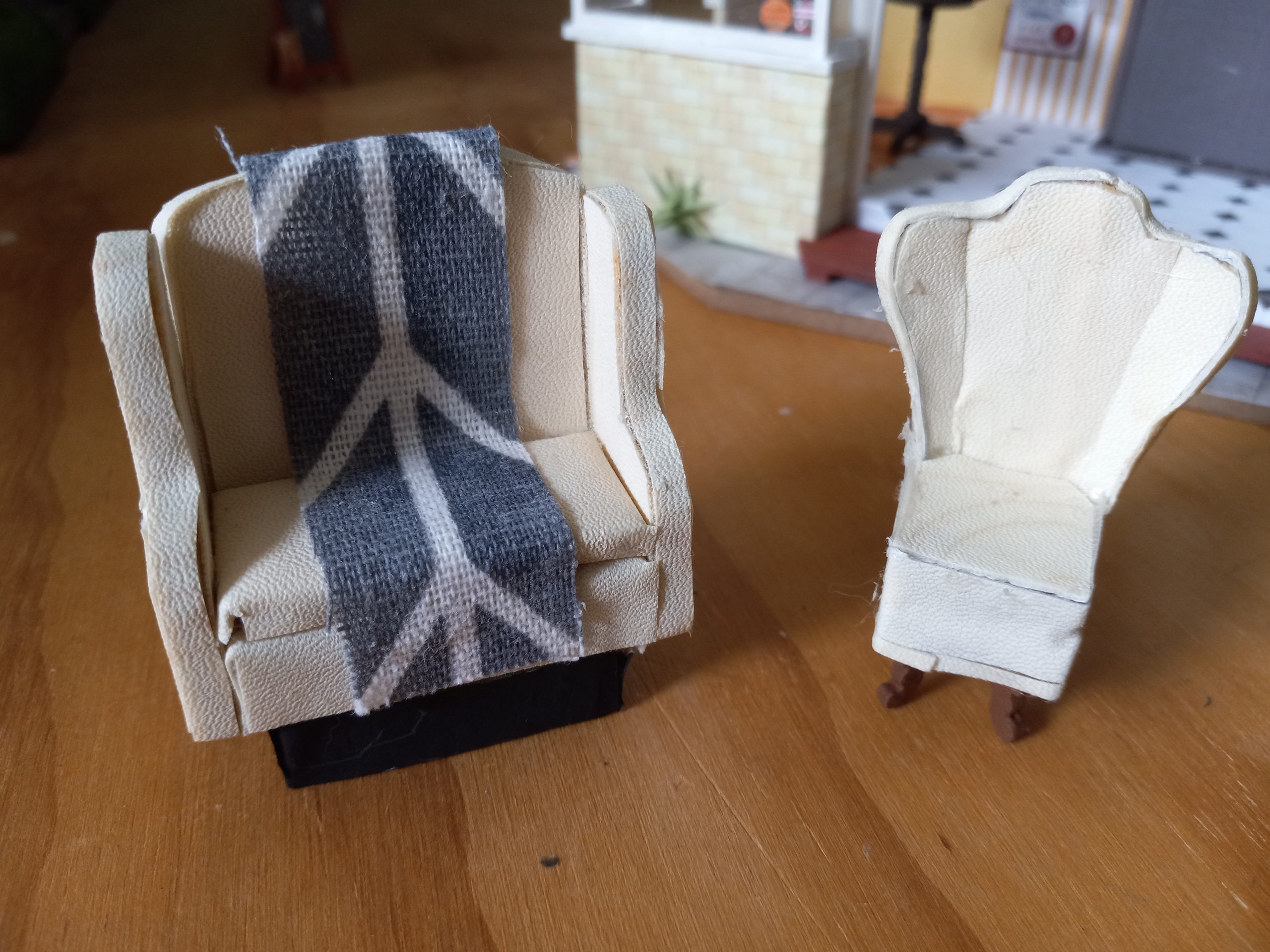 Another bit of customization I didn't consider until too late was this side door. As you can see the door gap there is quite small. It would've been worth it to just close it off altogether by adding the plastic panel over the doorway and just adding a piece of wood below. If you scan the design of the wood print and then print it, you could just use that instead. A lot of work sure, but it would look mostly seamless. 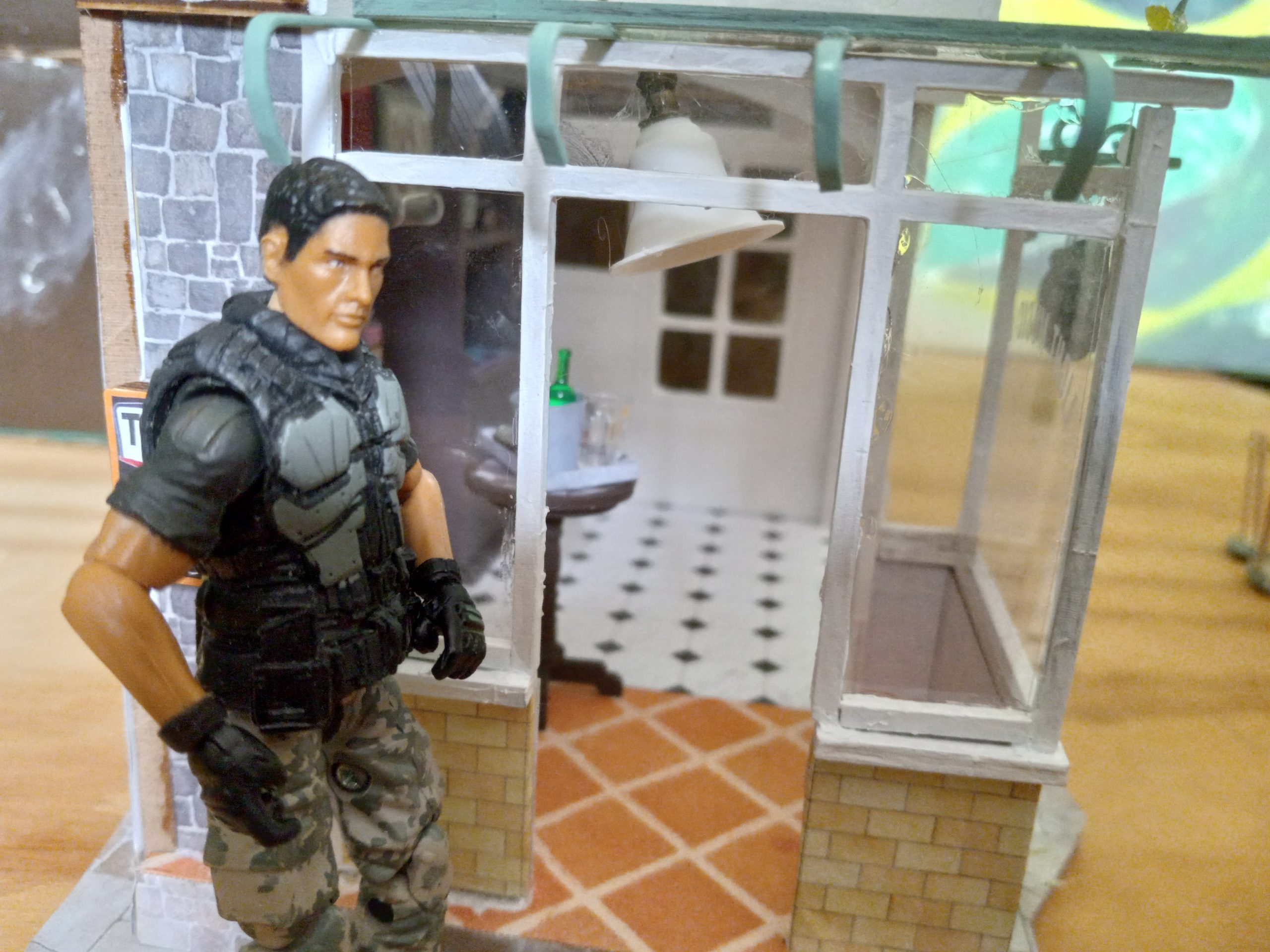 Finally the last thing I will mention are the lights. I find that they hang too low and went too far with making it before I realized that. I think if you can set those two bars below higher, by like half a inch, then it would make a world of different. Perhaps if there was another piece of wood on the other side to help brace the bars against the yellow wood that would help? Also make sure to test the lights before you start wrapping the wires and gluing them in place. It doesn't say that in the instructions and I was silly to not test it and ultimately only 1 out of the 3 lights work and I can't be bothered to take it apart carefully and put it together again. 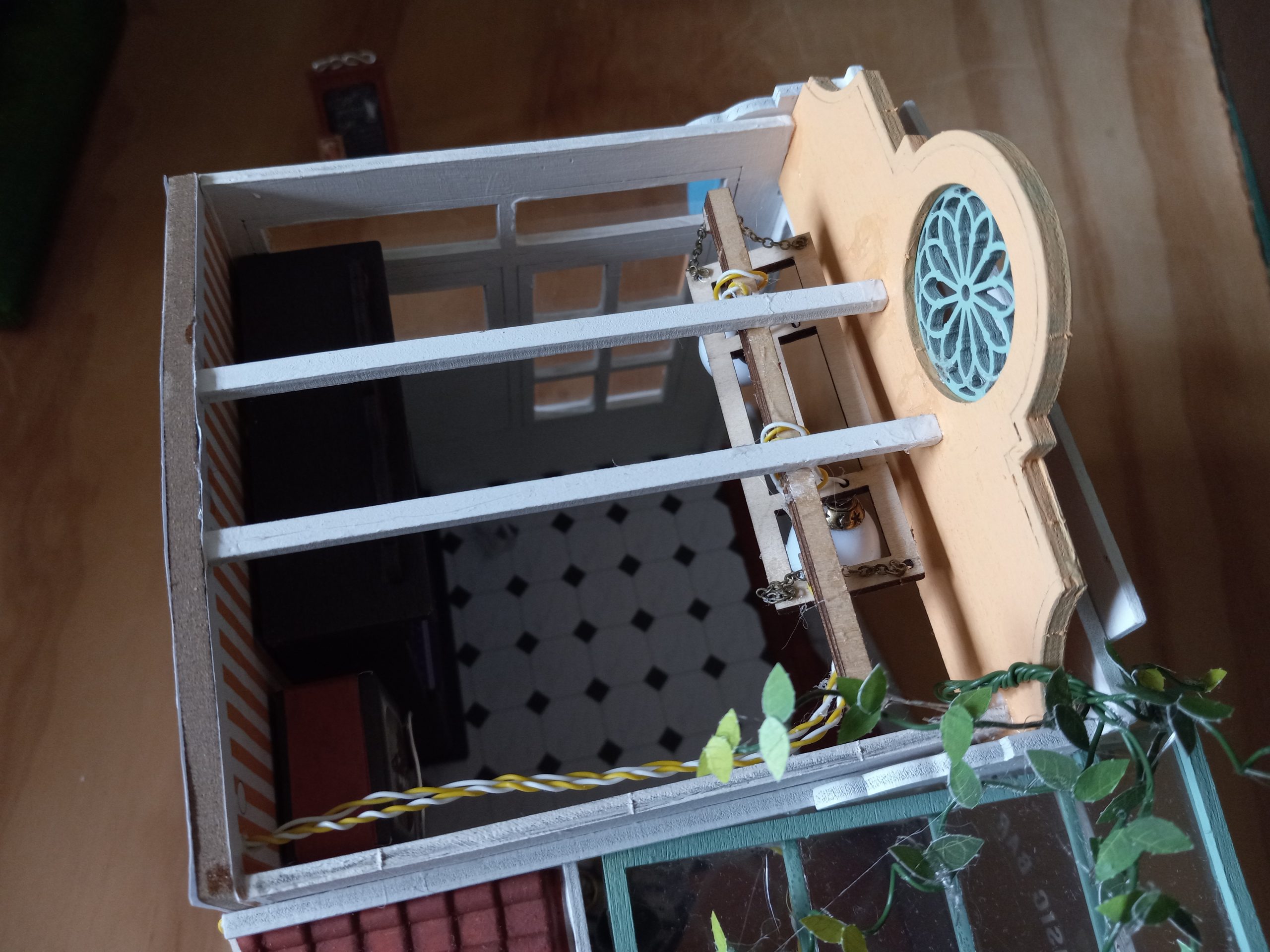 The kit makes for a solid scene and works well with 4 inch figures. It is a standalone building, but could work with outside tables set up or something. All the bottles and cups also work well 4 inch figures too, which alone is pretty awesome.