There's been a Chinese company called Joytoy that's been making modern and science fiction based 4 inch action figures for a while, and I thought that I would give them a try. My first foray was this group of Russian Naval Infantry. Not that I'm well versed with how modern Russian military uniforms work, but I did think these guys could pass for Spetsnaz too if you were looking for that. 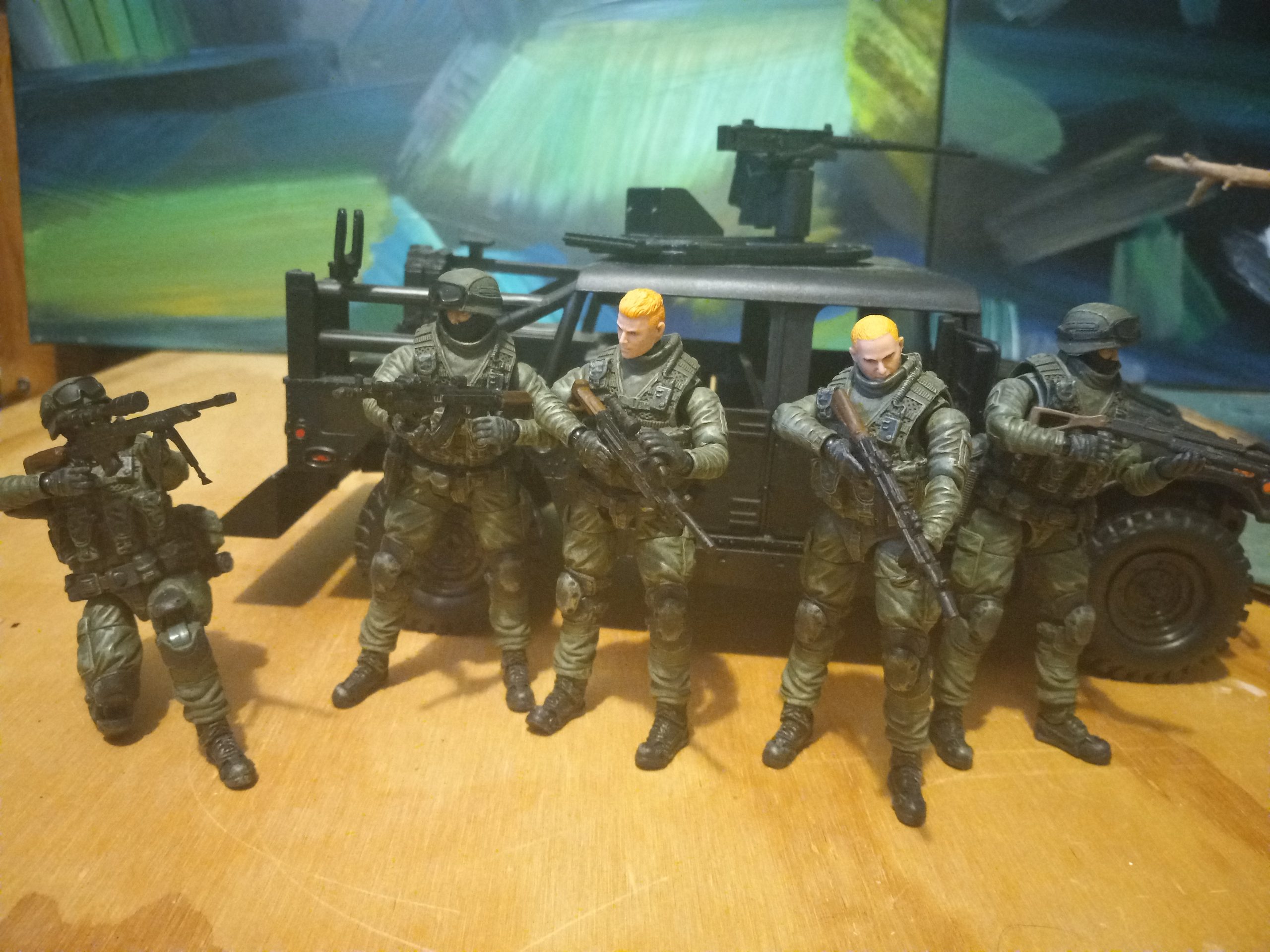 All five figures are identical, which is great if you army building. Each comes with a swappable head, so you can replace the helmet and mask with that. Note that the helmet does not come off it is attached to the masked head. I'm sure not sure how it attaches but I suspect if you remove it, there's going to be some weird plastic sticking out on top of the black mask part so I haven't bothered trying to switch it. They are solid figures and very poseable. The wrists bend and they come with extra hands, even fist hands if you want to make them look like they are in a fist fight. In that way they are designed quite nicely. 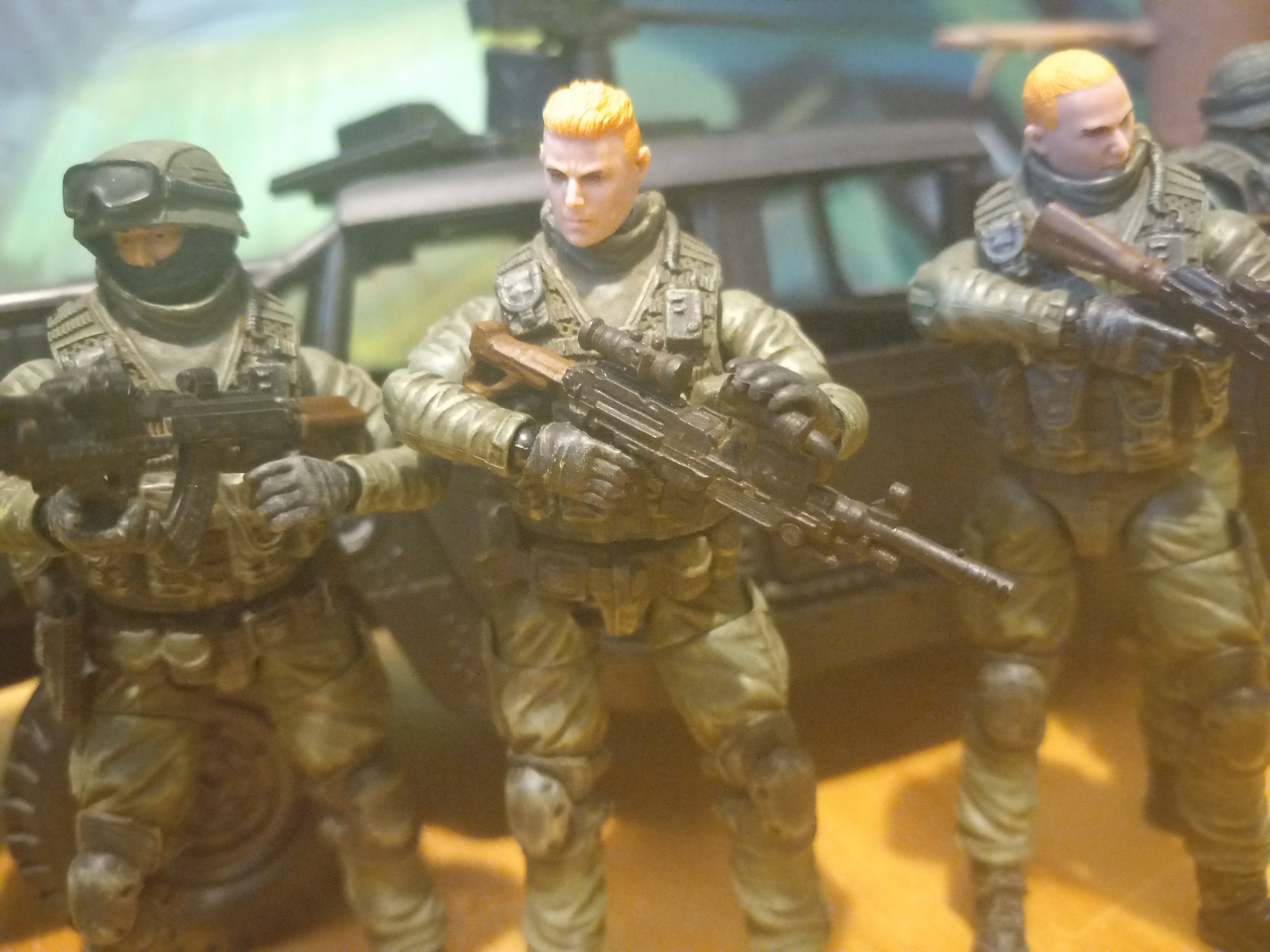 The weapons are a bit of a disappointment. Most of the AK's look all right, but that machine gun is so short and I thought it was meant to be look Russian, but that's just the paint applications as the PLA figure pack I got has exactly the same machine gun. Which is too bad I was really hoping from the pictures that it was a bit bigger, but it's actually shorter than the AK on the figure on the left. The extra heads you get aren't very impressive, most look like the one on the far right where it's mostly clean shaven and just grimaces. The center figure's head is my favorite and looks a bit like a young Dolph Lundgren. 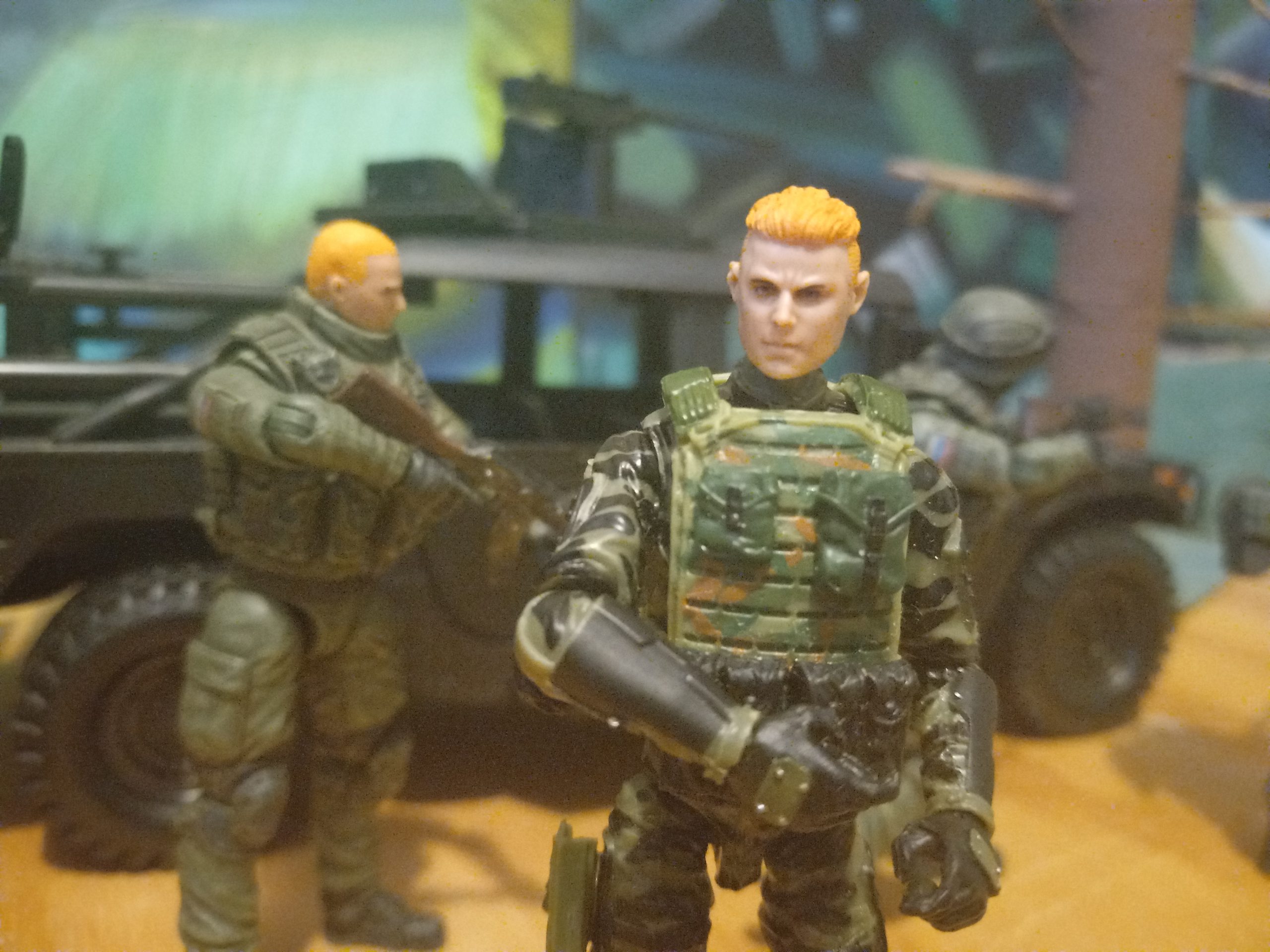 Also most importantly the heads do work on most GI JOE and Marauder figures. Here's a picture of one of the Marauder bodies with the Dolph Lundgren head. I think they are slightly smaller than the Maruader figure heads, but it's pretty close. 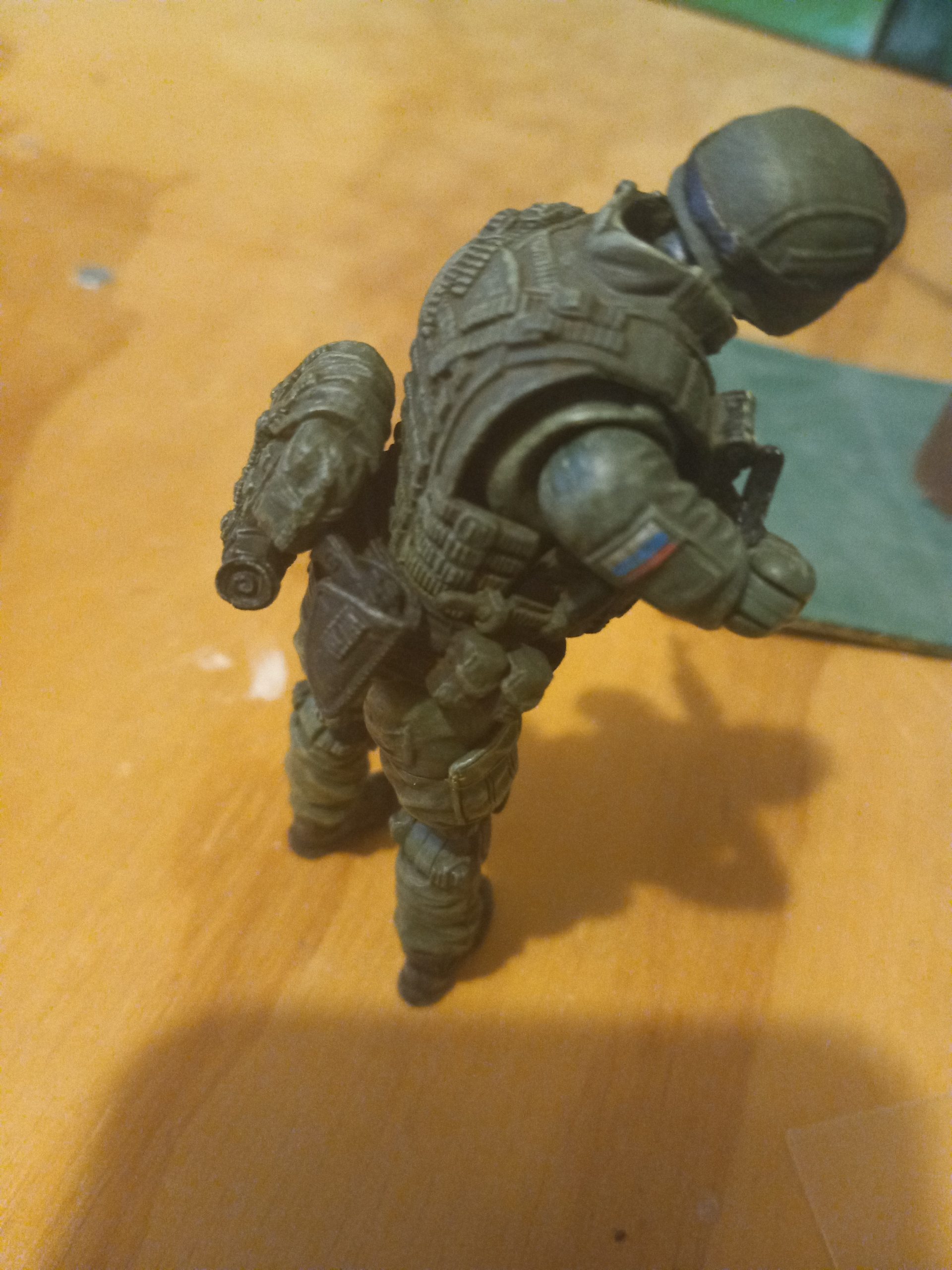 The figures have this weathered look to them, which I like. Makes them look more like real people than just toys. The flag on the arm is also a nice touch. I also wanted to point out in this picture is that butt pack, which is attached to the belt, along with the gun holster. That butt pack does not come off unless you take off the holster, and that is a shame. Be nice if we could have the holster and no butt pack. One could try ripping off the butt packs, but then of course you couldn't reattach them again unless you glue them and then you're right back where you started. The holster at least comes off with that little strap though. 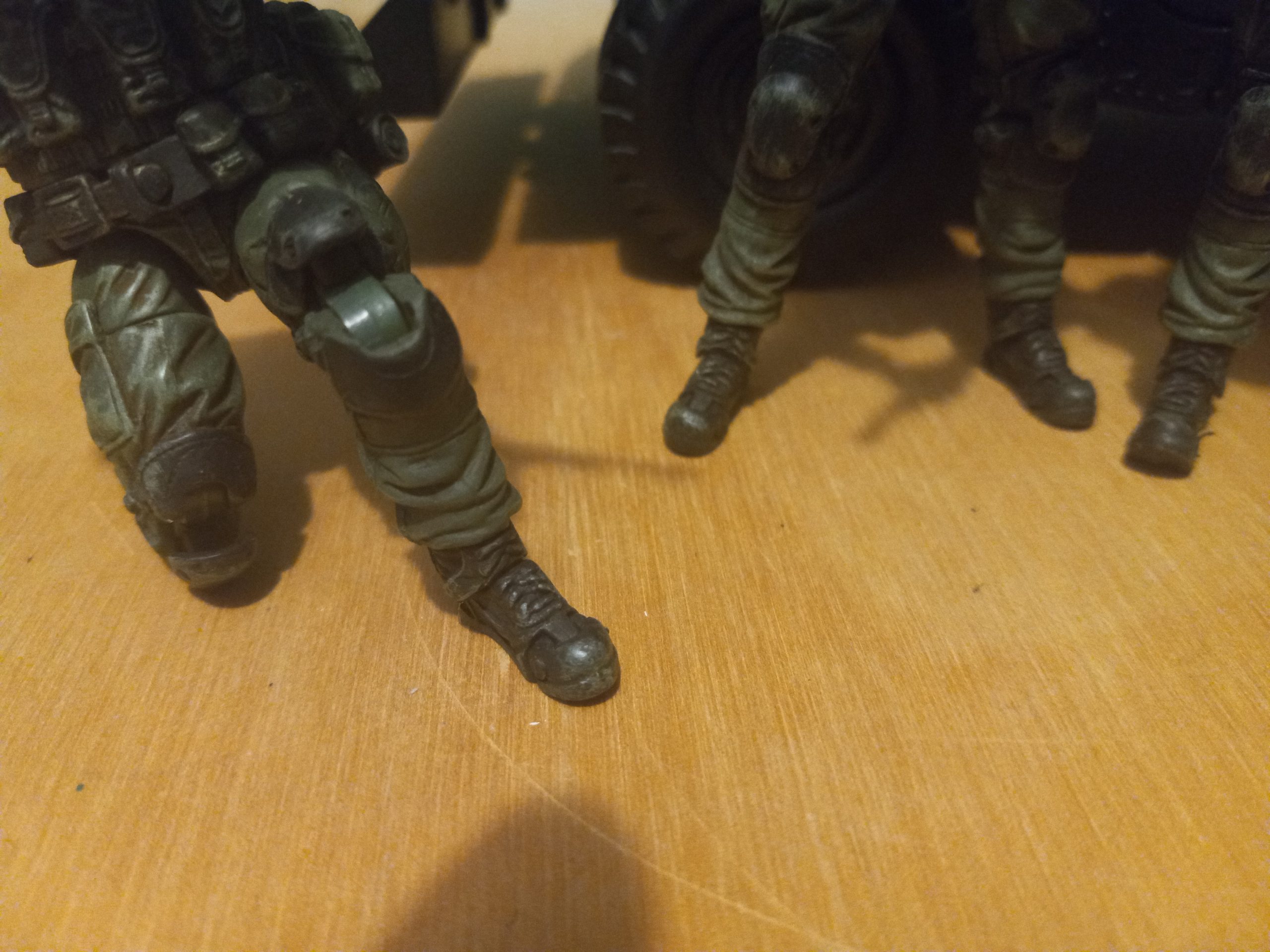 One thing I wanted to mention that I love about these figures is the toes. As there's a joint in the toes it does allow for some poses that wouldn't be possible without a stand. It's a nice little detail that they put in and I think it gives them more joints then most figures. 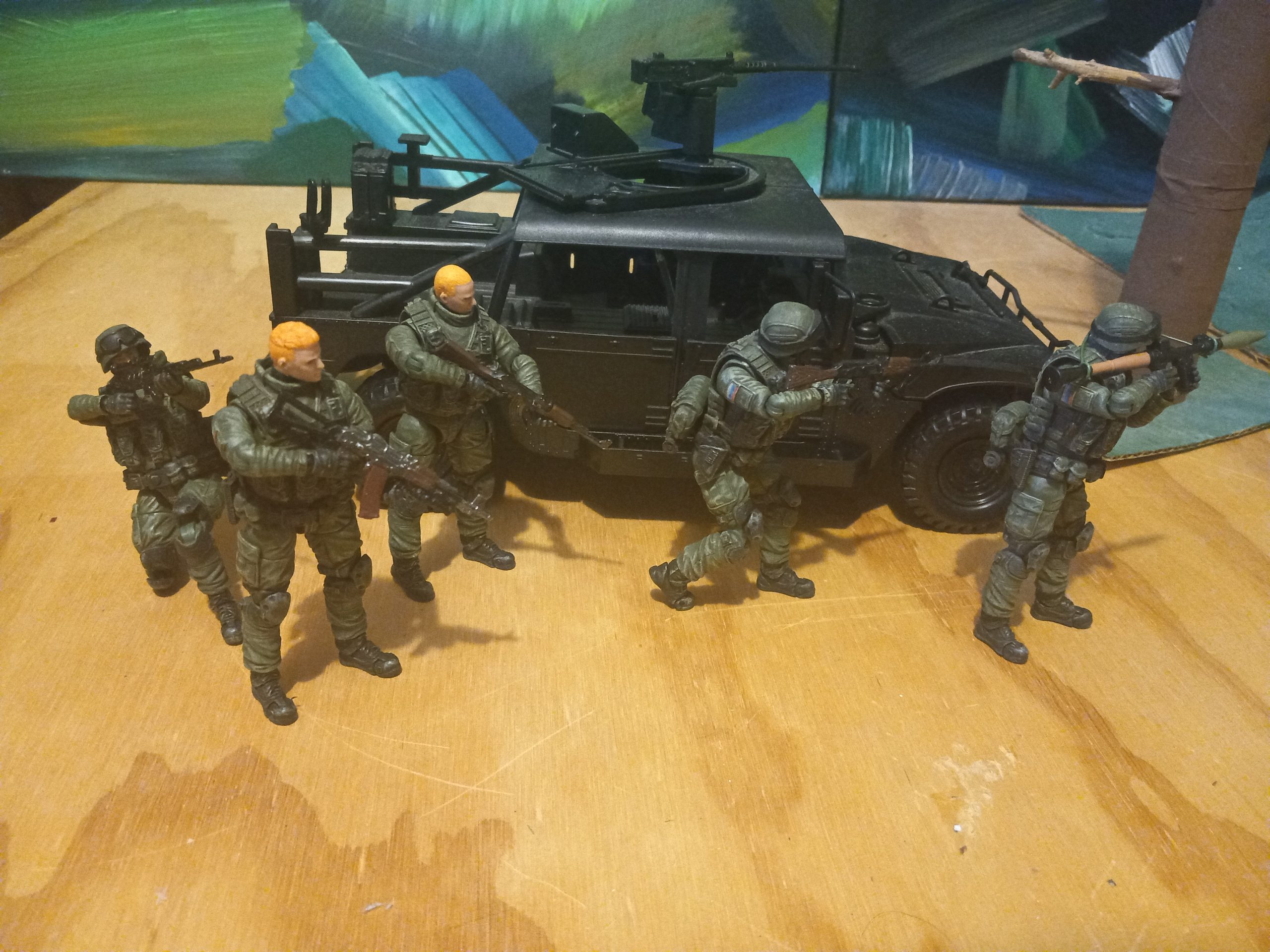 Here are some figures with Marauder guns, well not the RPG, but it's the only RPG I have that has some colour on it. I think overall they look pretty good. Probably have to paint the Marauder guns with more weathering to match the figures. Also need to get some of those newer AK74s that Marauder has made to go with them. Note the figure in the middle with the bent toe. He's balancing all on his own. 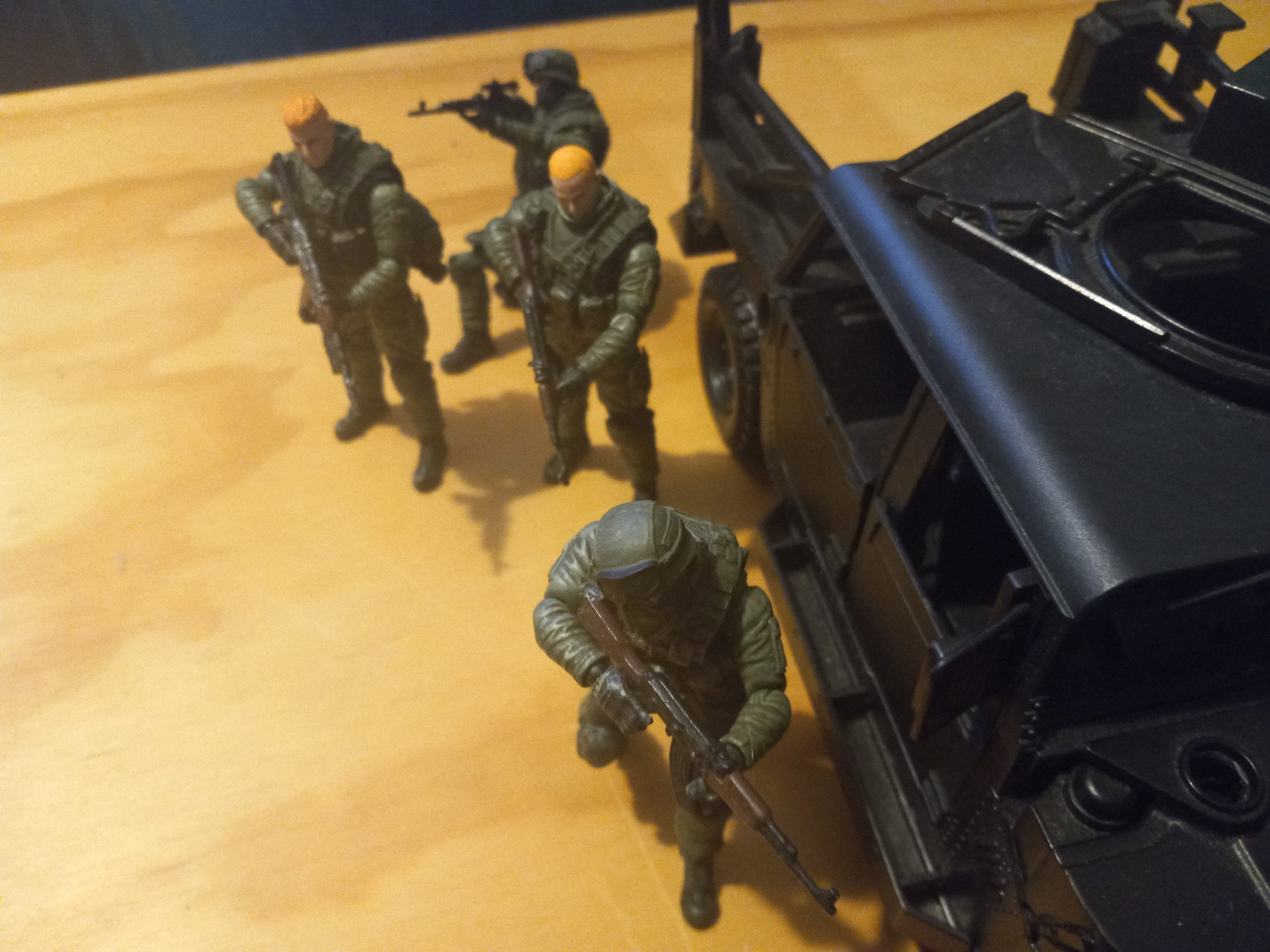 See he's not leaning on the Humvee, nice right?

Now they do have holes in their feet but they are just too big for the pegs that the latest 4 inch GI JOEs have been coming out with. I haven't tried the old o-ring figure stands but I have a feeling those are too big. If I find something that works I'll let you know. The PLA figures I got from Joytoy came with display stands but not these figures. 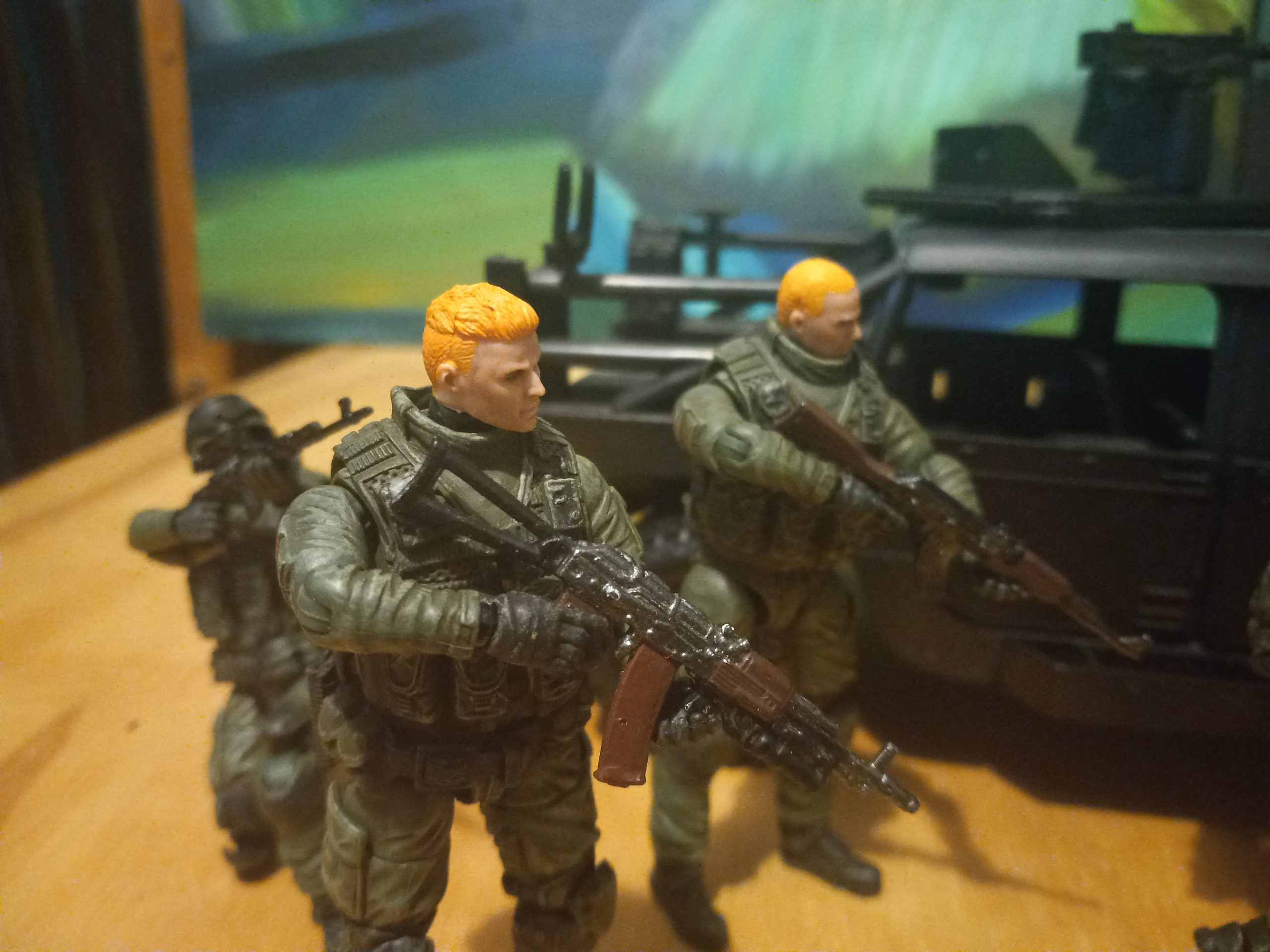 All in all I would say these figures are worth it. You can probably find them for under $100, I got mine from Amazon but I did see Smalljoes and BigBadToyStore offering them as well. My plan was to use them as Spetsnaz in volume 3 of my diostory The IOM.