When I saw that there was a company making 1/18 scale mech I was instantly interested. I've loved the Mechwarrior games, but didn't want to get into the tabletop game sense that meant a new scale to stuff to collect. Though, I am interested in the 1/24 scale ones too, but that's later. So my first mech is the Snark Commando. It's pretty basic looking thing, but it does move and has swappable arms. I've put on the gatling gun on, and on the left the fist. I do like the fists. 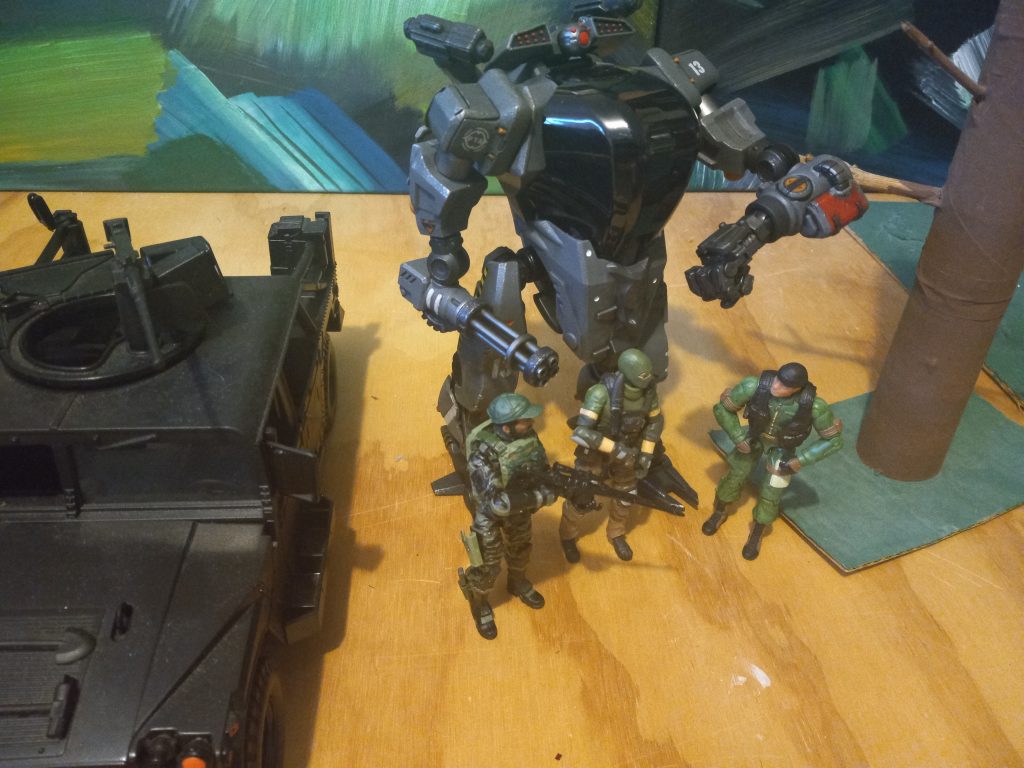 The hands do open and and and can grab things, which is pretty neat and not really demonstrated in the pictures for it online. Here is a shot to give a sense of how big it is compared to the figures and vehicles. It's not like Mechwarrior scale, more like an armoured suit. 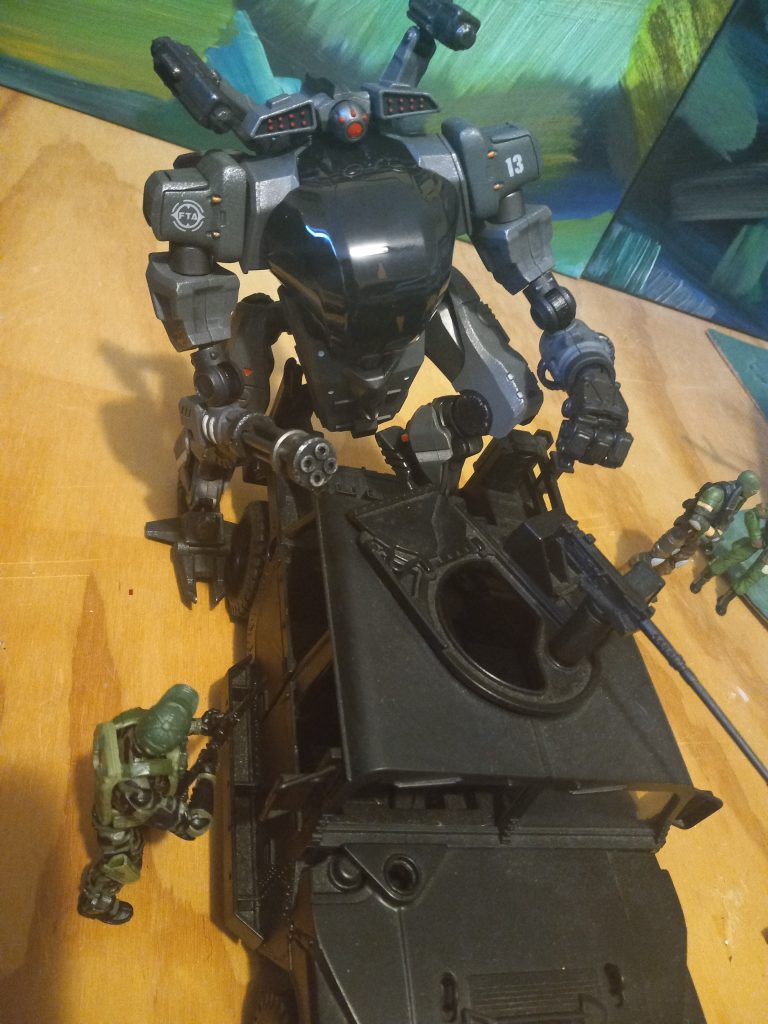 Here's the mech trying to get into the back of the Humvee. It can at least get it's foot in the back. Though I didn't take a picture of it, the Bruder trailer could totally fit one of these things laying down on it. The arms only bend up and down at the elbow. Though the fist has an extra bending joint in it. Angling the gatling gun at a target is a bit trickier. 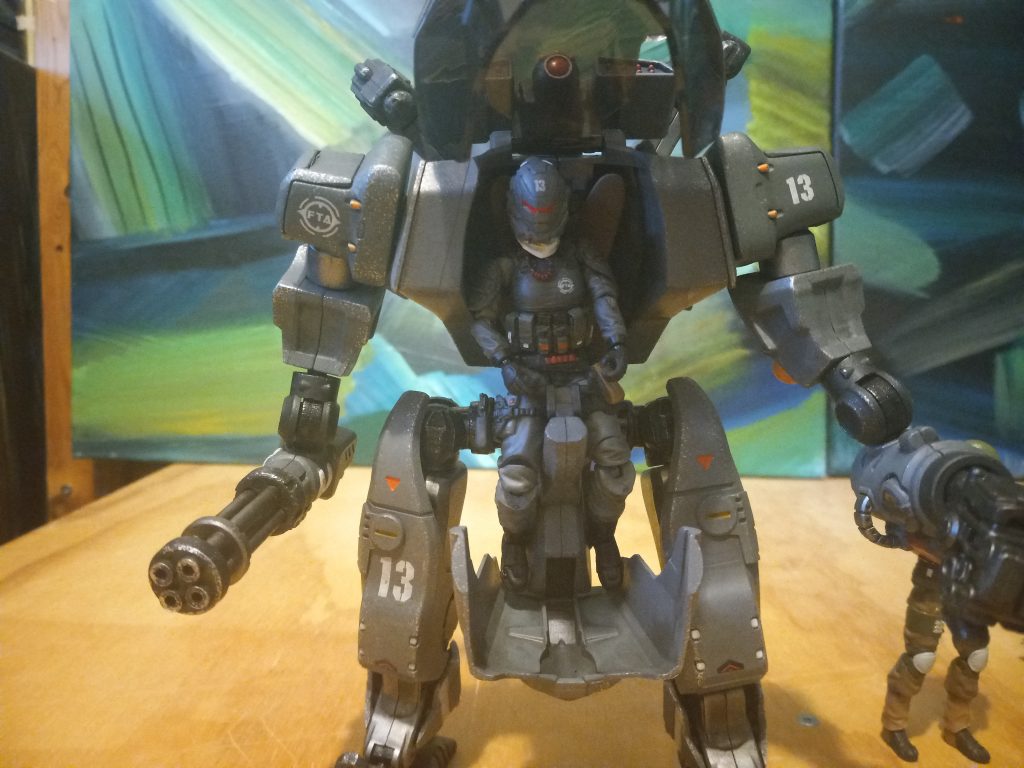 The cockpit is a bit of a disappointment in that there's not much to it just a set of joy sticks. I was hoping for some fancy screens in there or something. 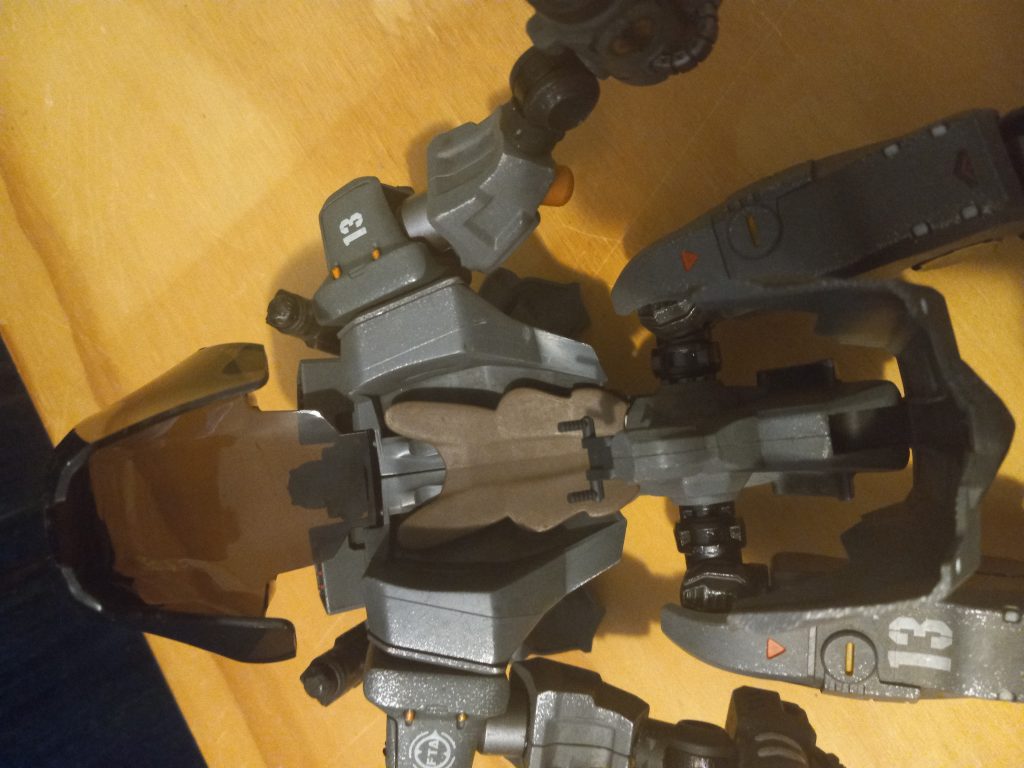 Here's another picture of the cockpit without the pilot. It is quite bare in there. Hard to imagine one could control something fancy like this with just the joy sticks. I guess she did come with that crazy looking helmet, perhaps there's some kind of HUD in that thing. 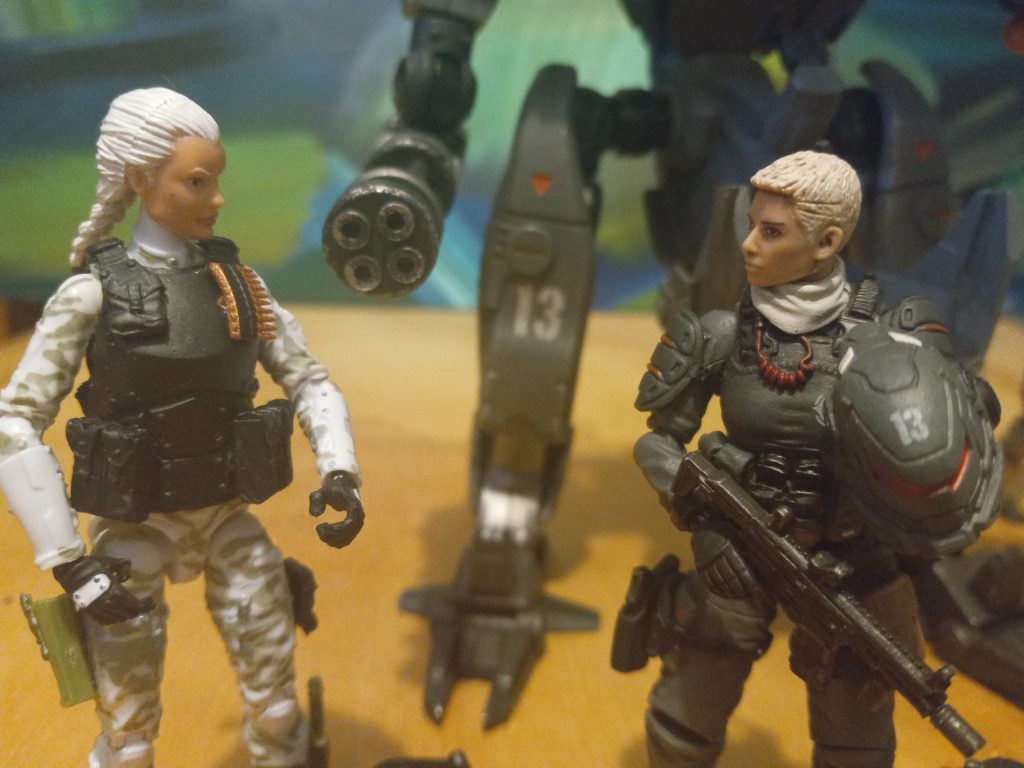 Sonya wanted to check out the new pilot since she also has white hair. Like most of the Joytoy figures they have this weathered look to them. So it's not quite the pure white that you may have seen with Marauder figures, but a darker white. She comes with a SCAR rifle and a handgun on her thigh holster. Though she pilots a mech, she looks modern military enough that you could use her in those scenarios too. 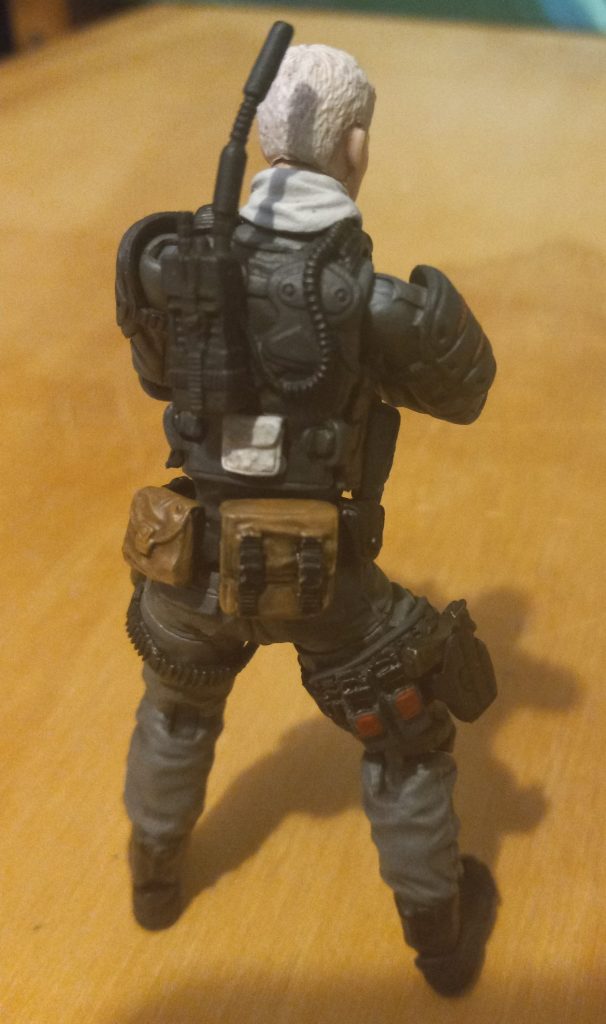 She also comes with this radio attached to her back. which is cool, but it is stuck to her vest though and does not come off. Also the front piece of her belt makes it so that she can't fully bend her left thigh, which makes it hard for her to sit down. It's fine for the mech where she's standing all the time, but getting her to sit in a chair doesn't work well. There a lot of nice little details like the clips that go with the handgun in the holster are a nice touch. 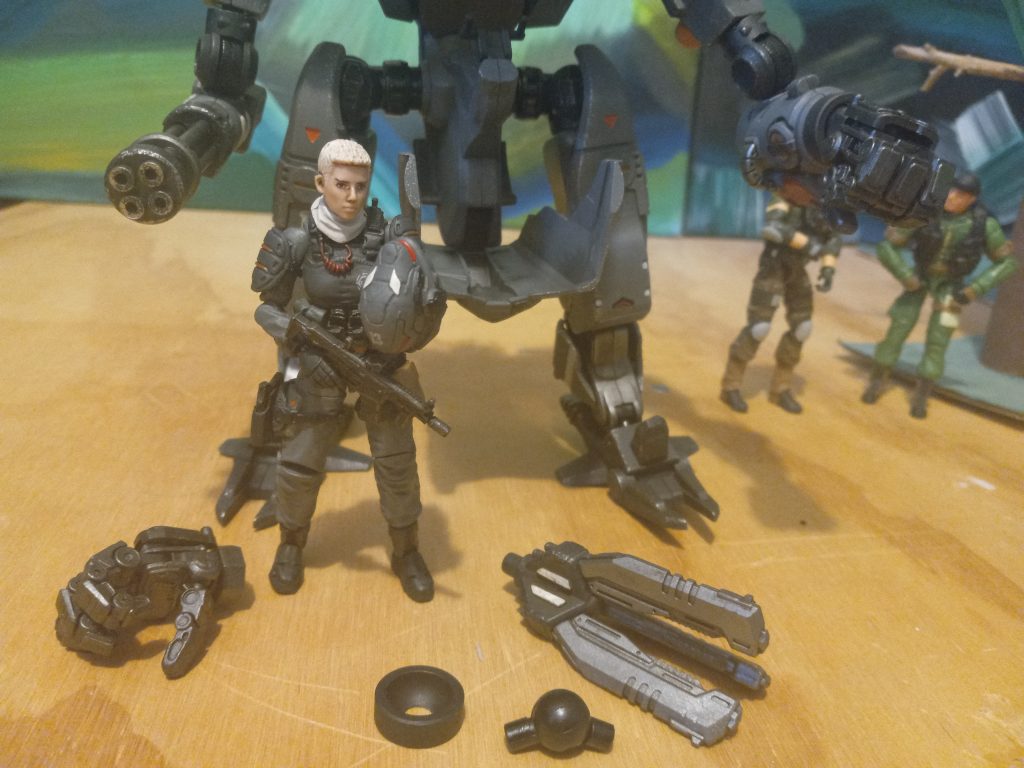 Here's all the stuff that came with the Mech. It does have two fists and that weird tripod gun thing. Note that the gun thing is not a claw and it doesn't open, I thought from the pictures that it might, but it's actually a three barreled gun of some kind. Maybe like a shotgun? 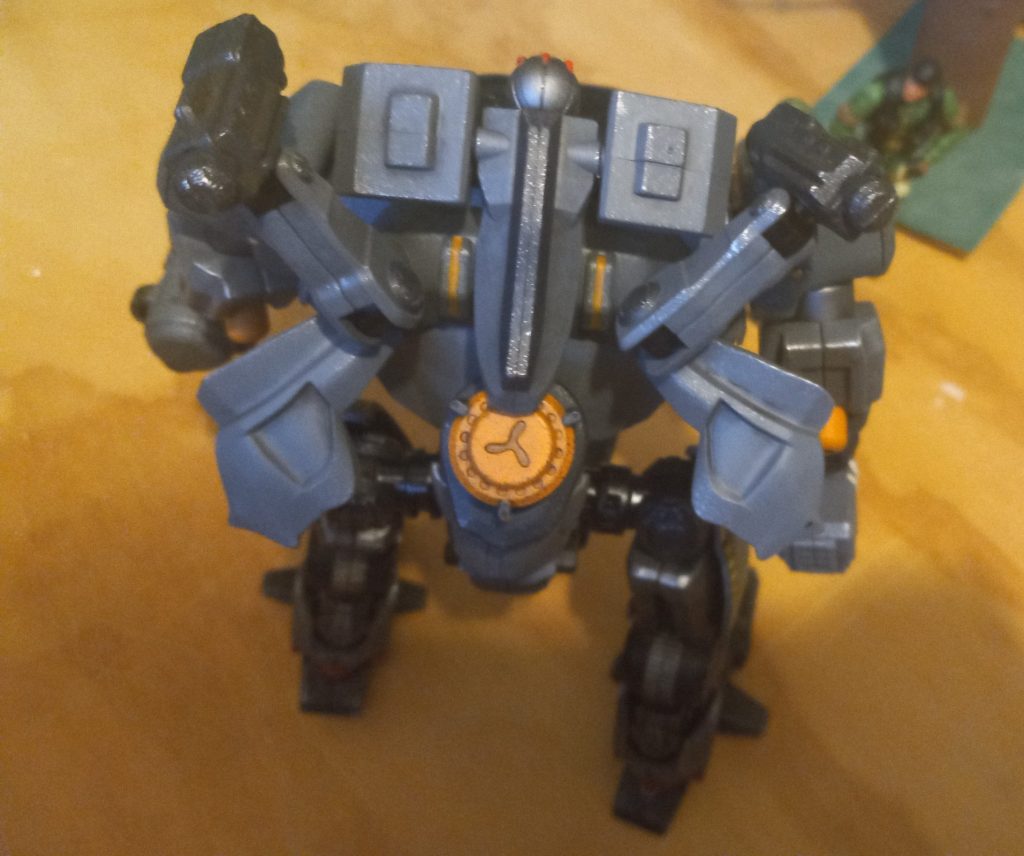 Here's a picture of the back. On the top if had these two shoulder guns and then there's little rockets in that centre piece on top. That circular bit reminds me of the fusion cores in the Mechwarriors.

I'd say its still worth getting if you want a cheap mech as it was only just over $100 on smalljoes.com. It has made me start thinking that I should work on that third campaign book again, that would add cybernetic parts and mechs.