I have been starting to collect Joytoy figures and Mechs, I couldn't help but notice that Joytoy has a lot more mechs in the 1/25 scale than in the 1/18 (1:25 and 1:18) so I wanted to see what the difference really was. I had a suspicion that between the mechs there wasn't much difference, and I hoped that the figures weren't that tiny. Though the figures really are that tiny. 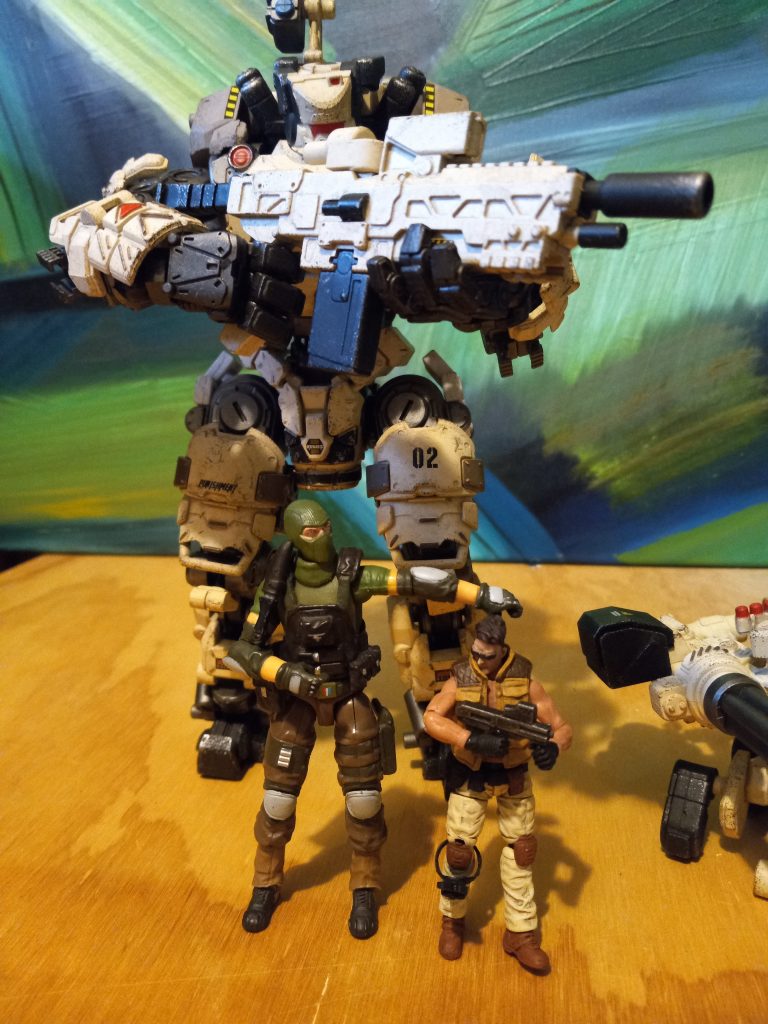 Which is too bad, but as you can see the figures are almost children sized compared to 1/18. I used Beachead here for scale, but the size of the mech to the 1/18 figure is still a reasonable size and honestly you wouldn't know that mech was 1/25 if not for the pilot. 1/25th or 1/24th is an interesting scale. If there were more figures, it would be a good scale to start collecting if you wanted to get into tabletop wargaming but didn't have a lot of space. You could have smaller battlefields and then these mechs would be an enormous presence on the battlefield. The figure pieces are not compatible with their 1/18 counterparts. The head is a different style. The hands and legs are different sizes. The weapons are odd sizes as well, perhaps a touch bigger than they ought to be. The weapons with this set weren't too bad. Also he has that leg holster that keeps falling down. 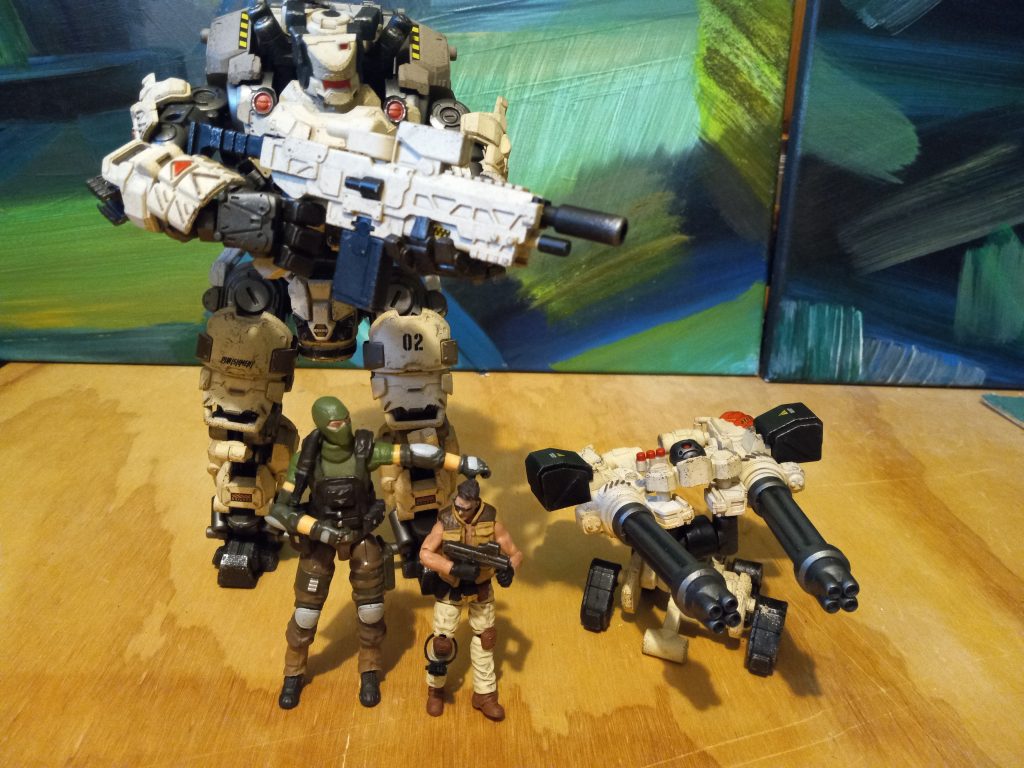 The Mech itself comes with a rifle and a pair of gatling guns. You can set the gatling guns on this little pod thingy, or the mech can carry them. I really liked the look of the rifle in its hands so I just went with that. 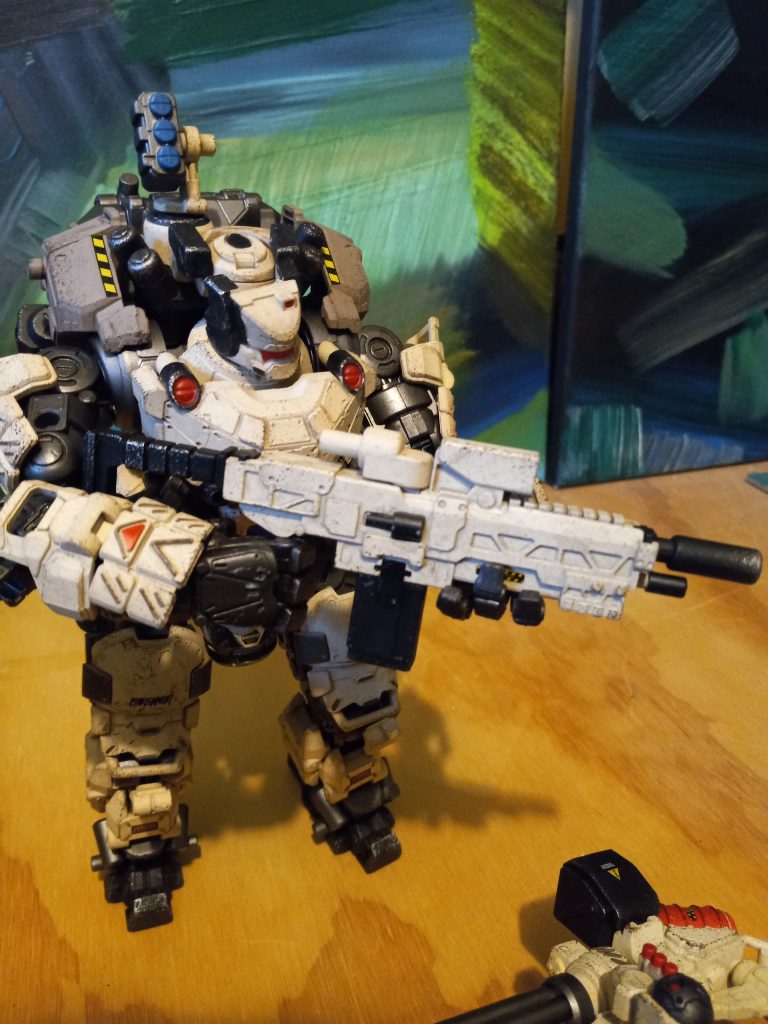 Then on top he has a little rocket launcher that might even just be for smoke grenades. Then of course he does have his hands which he can use as fists. There is an extra piece to the rifle that can go underneath making it look kind of like an underslung grenade launcher, but it makes the rifle look a lot longer and I thought perhaps it might make him a bit unbalanced. 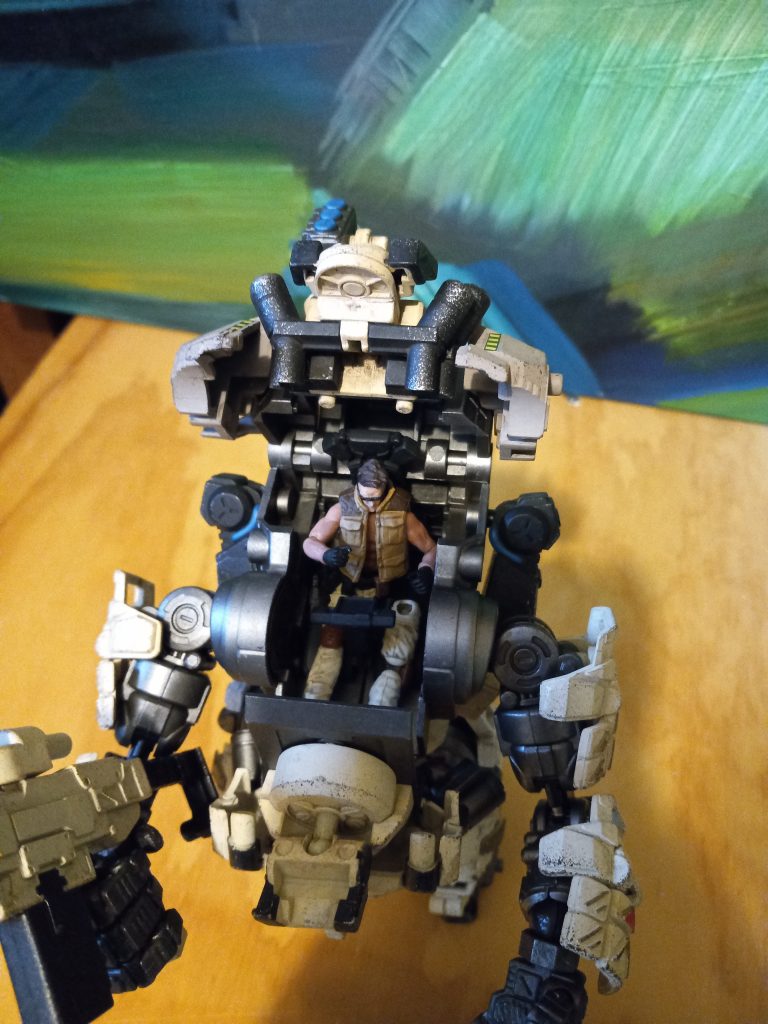 Here's a view of the cockpit, it isn't very big. So the figure just fits in there. I did try to fit 1/18 scale figures, and they'll fit but you definitely can't close the mech's top with the larger figure inside. Yes his left leg did pop off, it has a tendency to do that. Maybe it's just this figure with the issue, but certainly annoying when trying to get him to sit down in his mech and take a picture. 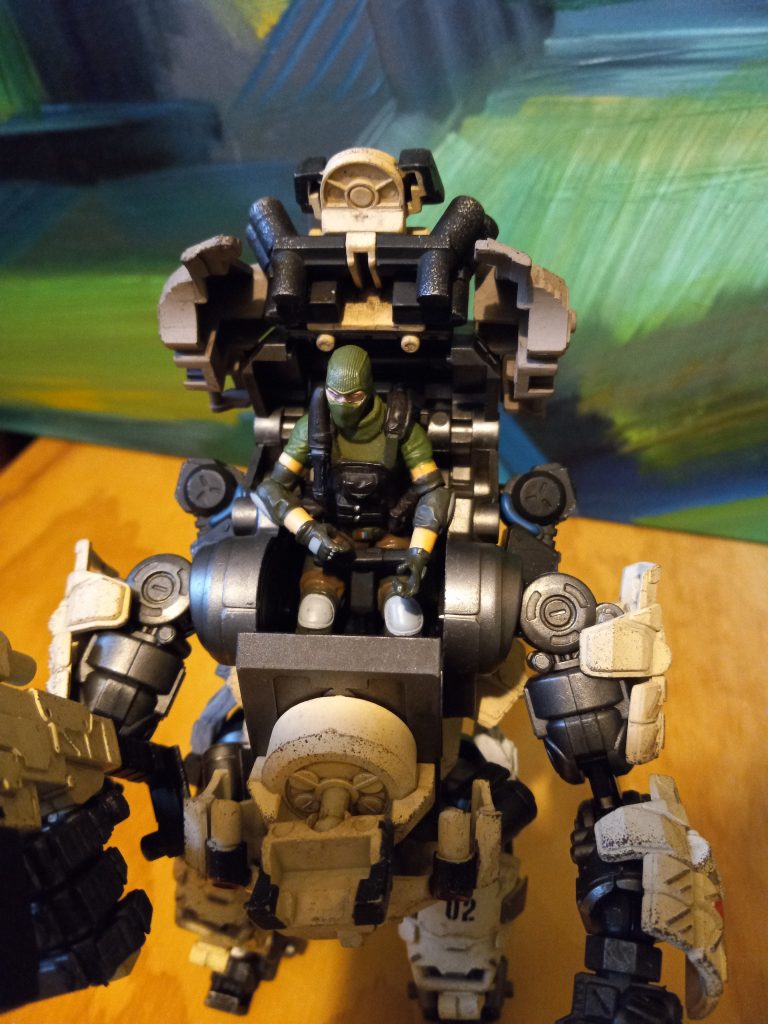 As you can see there's just no way to close the thing with a 1/18 figure inside. Though I think for diorama purposes you could make it seems like there's a 1/18 figure in there if you had to. Here's a scaling shot of this mech alongside the actual 1/18 scale mech I also have. 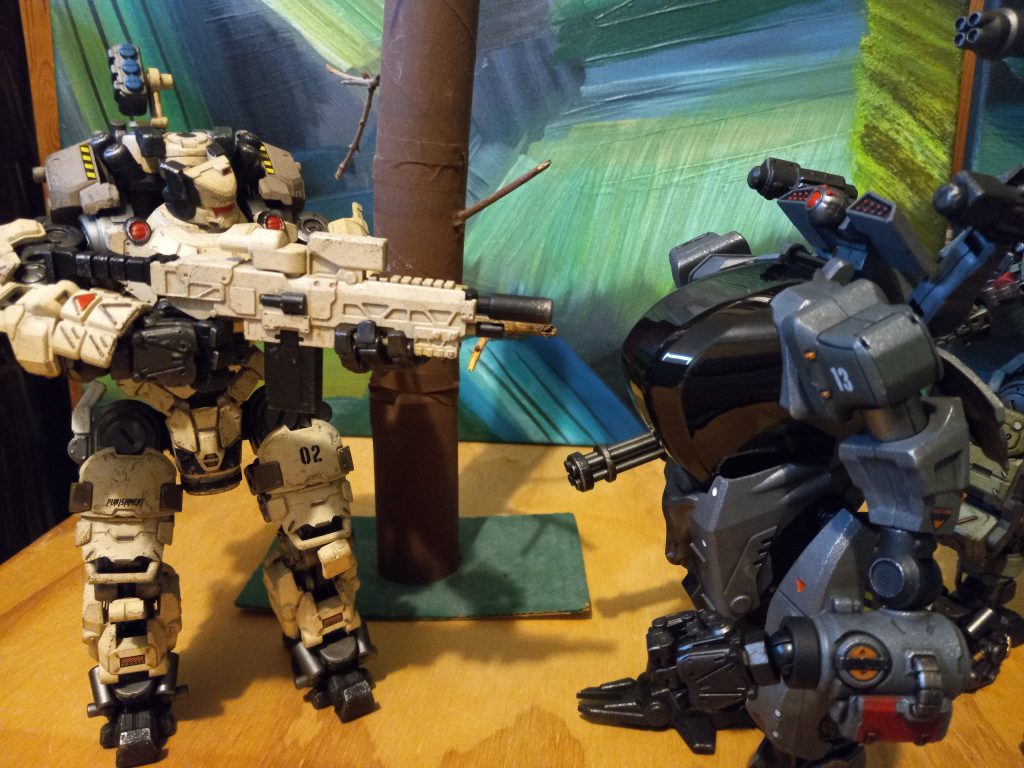 Funnily enough the 1/25 scale mech is actually bigger than the 1/18 scale mech. As it stands almost an inch taller. Perhaps that 1/18 mech I have is just tiny, I will compare future 1/18 mechs when I get them. Christmas is over after all. 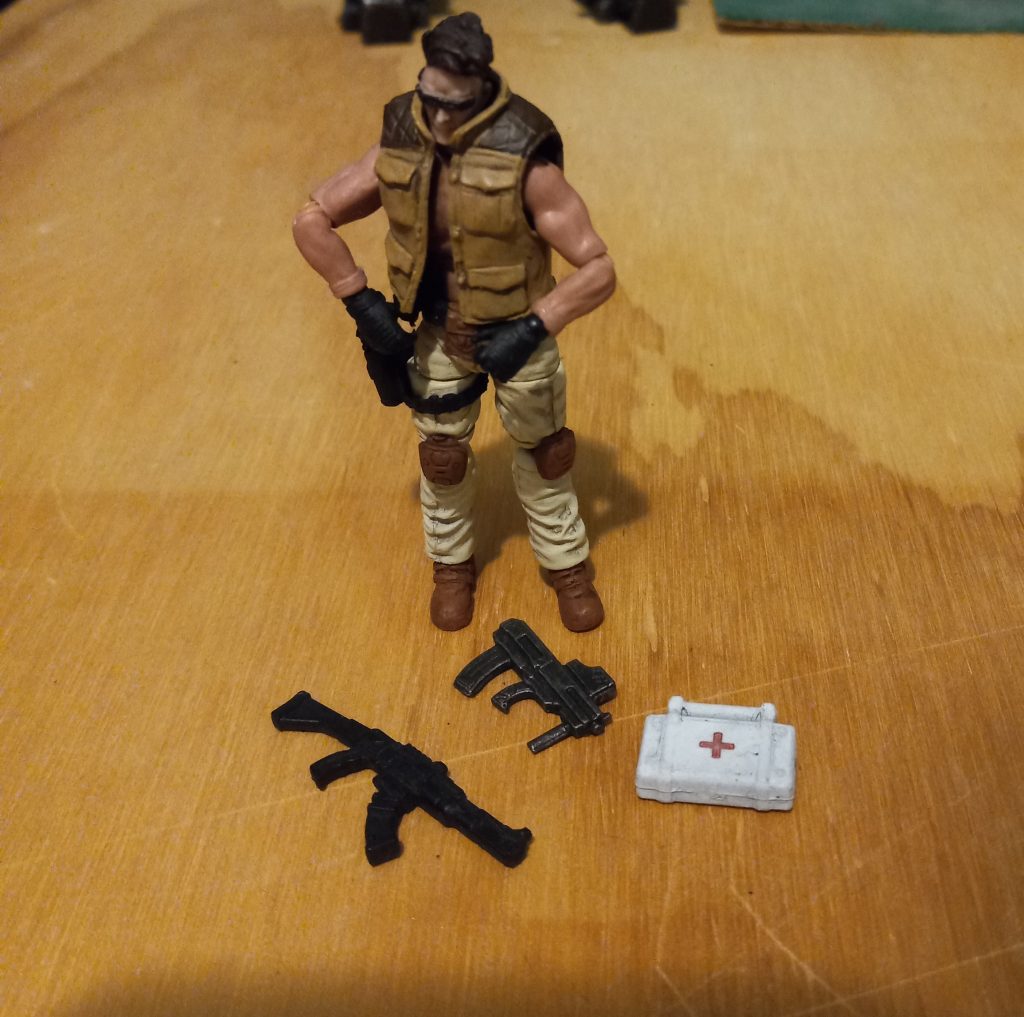 Here's a picture of the figure and the accessories he comes with. The guns are a little oddly sized, but at least they are both made of firm plastic. The weathering on the submachine gun is nice, but that reflex sight is enormous for that scale. That medical kit is nice though and I do plan to use that in my diorama sets as it's the perfect size for the female medic figure I use. I'm thinking I'll use this figure in my diostory as well, as he could pass for a child if I take off that holster. He does look pretty muscular for a kid, but maybe he works out or something. 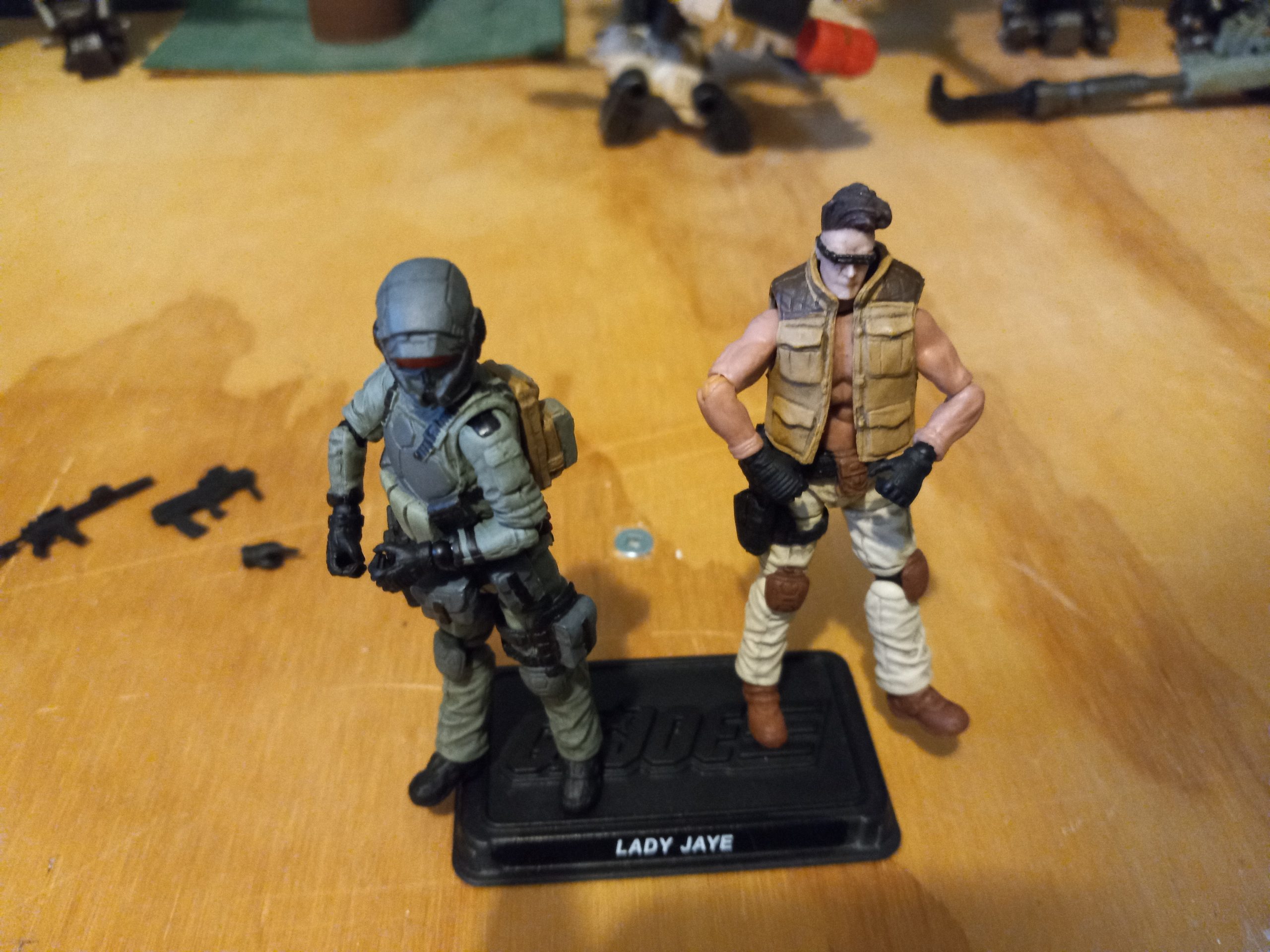 I also discovered that their feet do fit on the 4 inch peg style used by Hasbro. Though the figure in green isn't locked in as tightly as the desert guy is.