Bruder Truck and Sports Car - The Way of War

Okay so this is the last Bruder vehicle review for a while, though I have been eyeballing some of those bigger trucks and I still have to get my hands on one of those Jeep Wranglers, but that'll be a while yet. 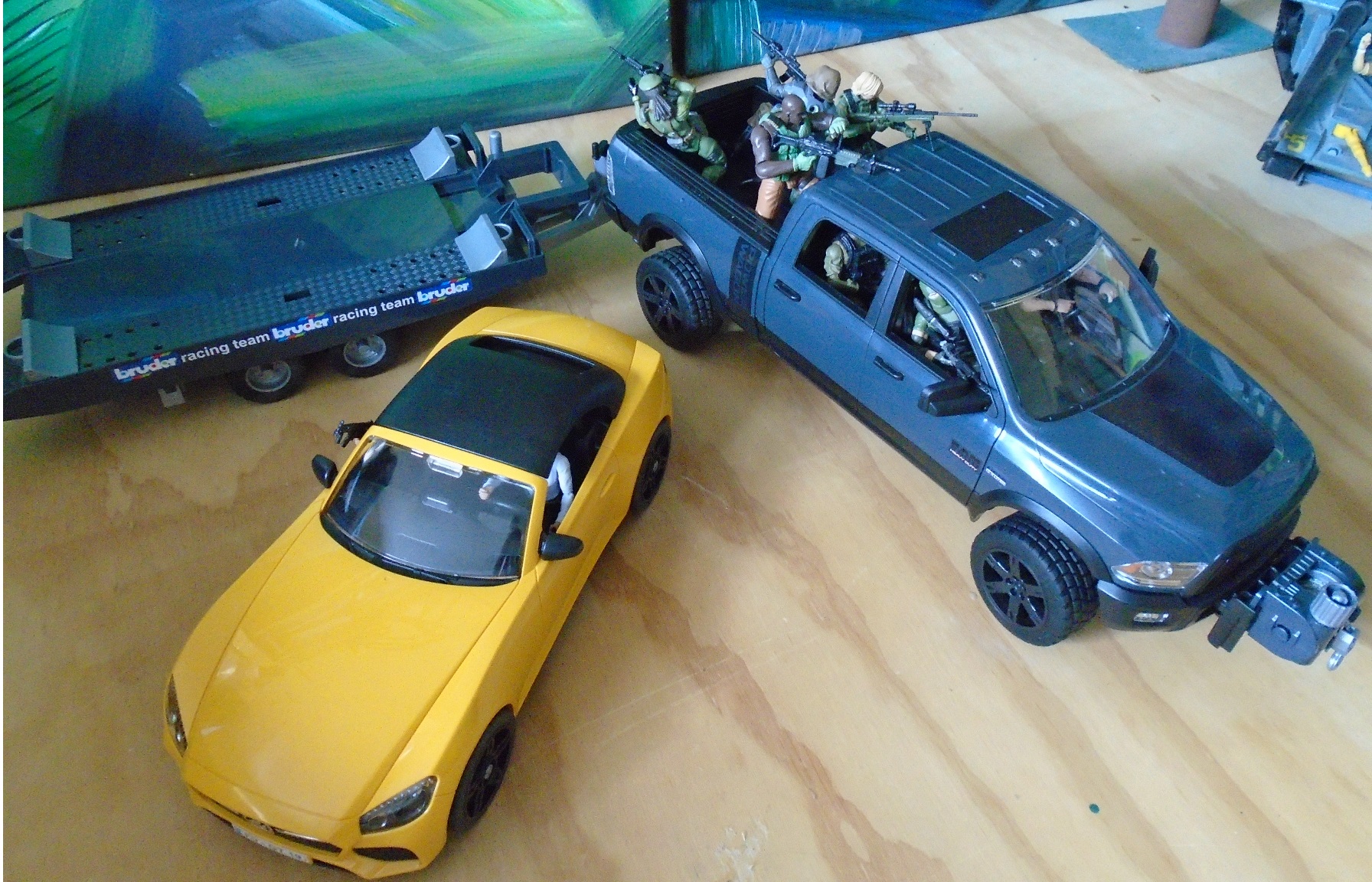 So what's nice about this set is the price. Alone both of these vehicles are fairly pricey, but together they are a pretty good deal and they include that trailer too. Ignore the Maggot sitting there in the corner. Points to anyone who can guess which issue I was shooting at the same time as this review. 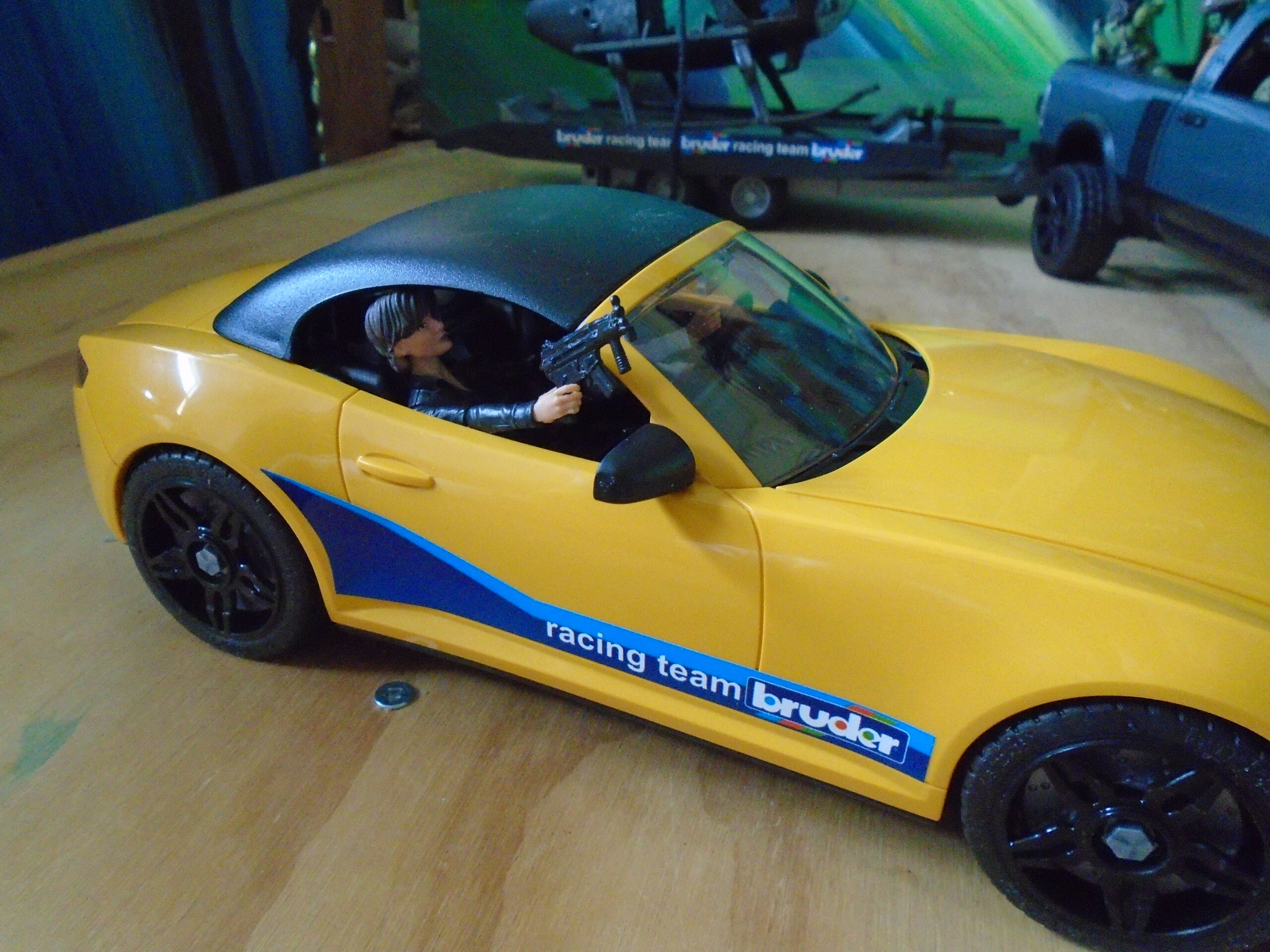 So the sports car look nice, however, the doors don't open. Which is a disappointment because all other Bruder vehicles have nice doors, but this one doesn't. At least the top does pop off. 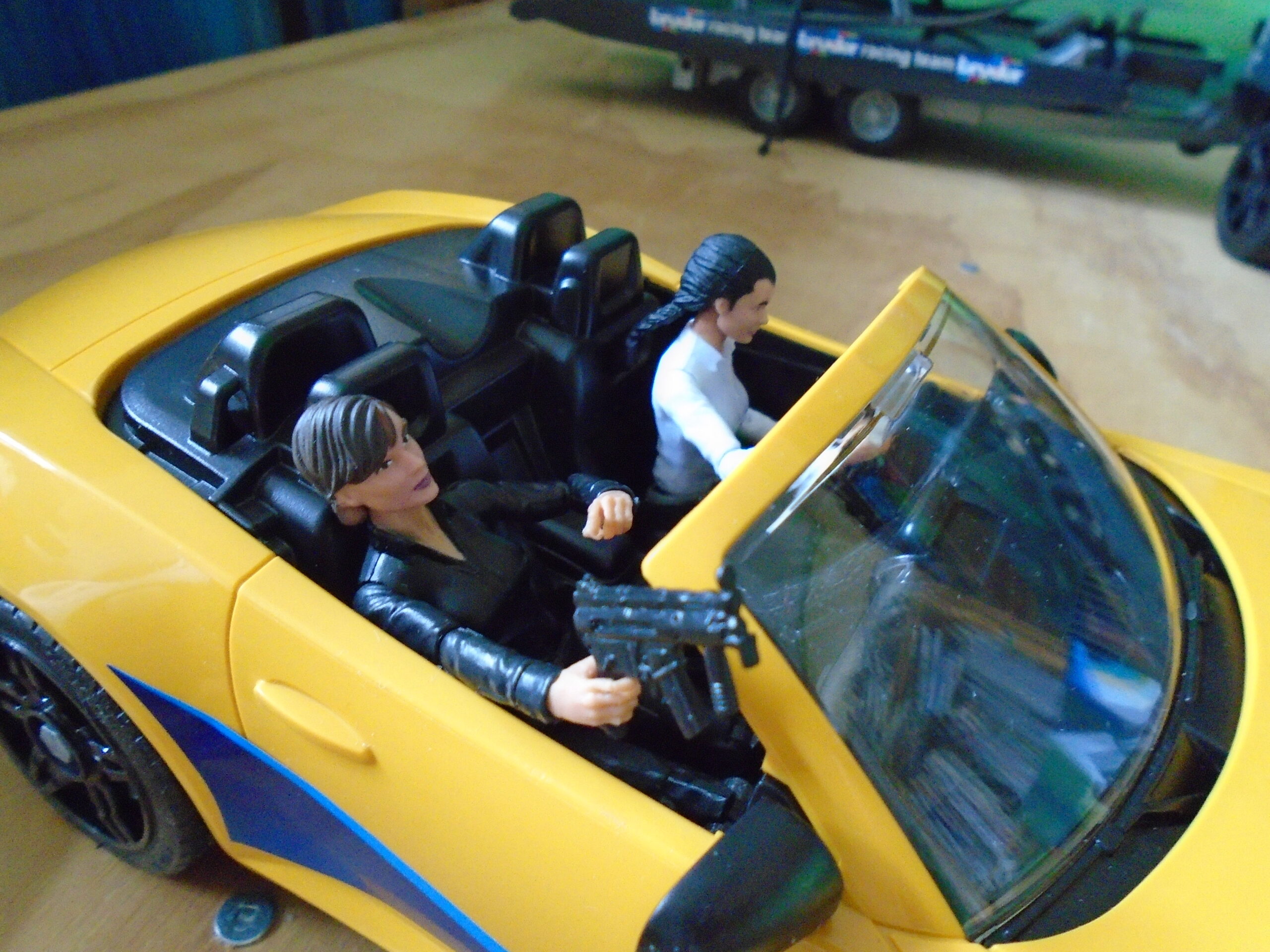 Though this means this is the only way to get figures in and out of the car. Height wise it's pretty good for 1/18th scale figures. Sylvia and Tasha look pretty good taking the car out for a spin. Those stickers on the side also come off quite easily and don't leave a mark, which is nice as I can't imagine many would want to leave the Bruder racing logo on there. 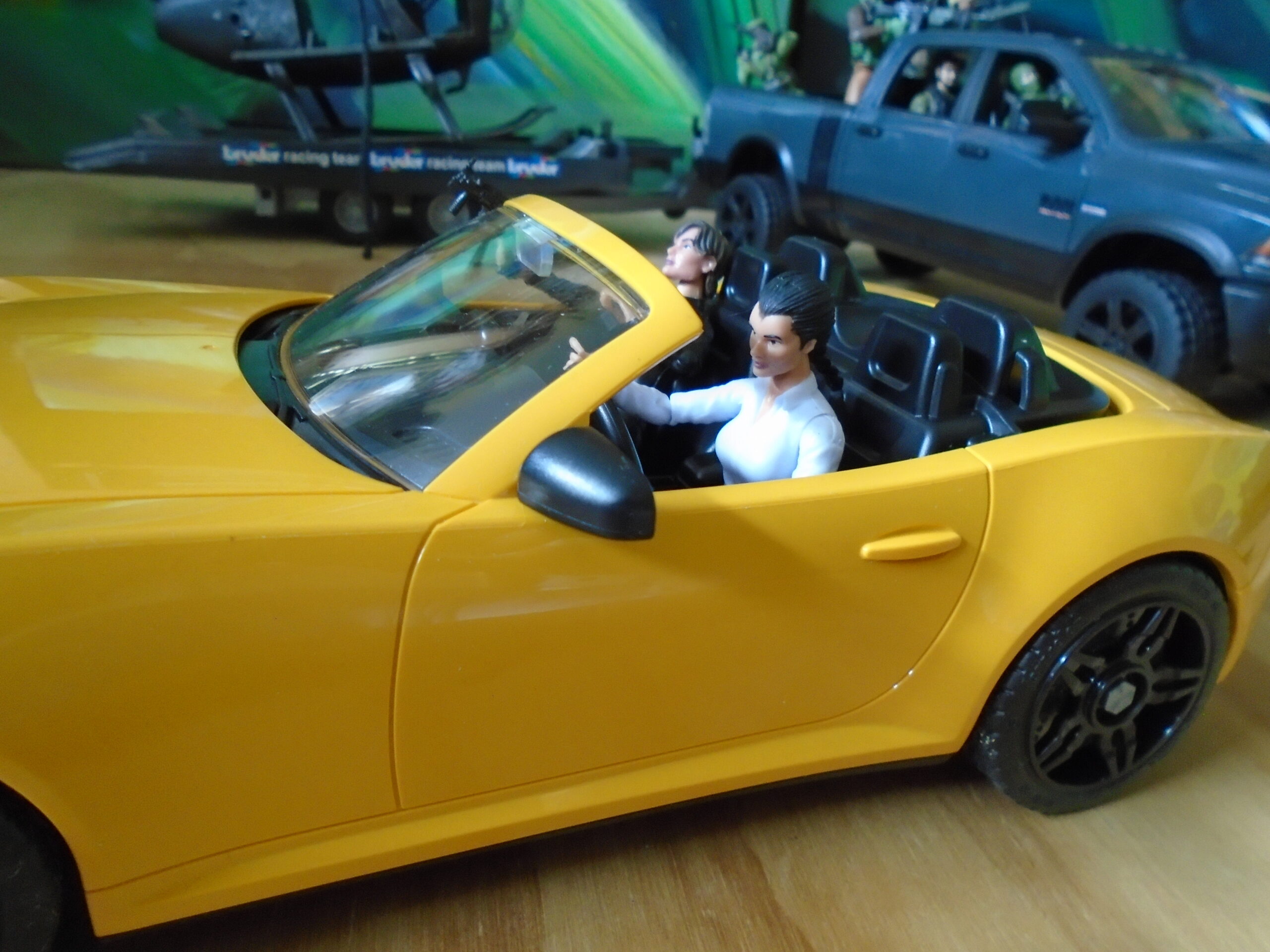 Here's the other side without the logo. The hood and trunk both don't open. As far as features go on this Bruder vehicle it's pretty disappointing. I bought it more just to have a fancy car as it does look fancy at least. 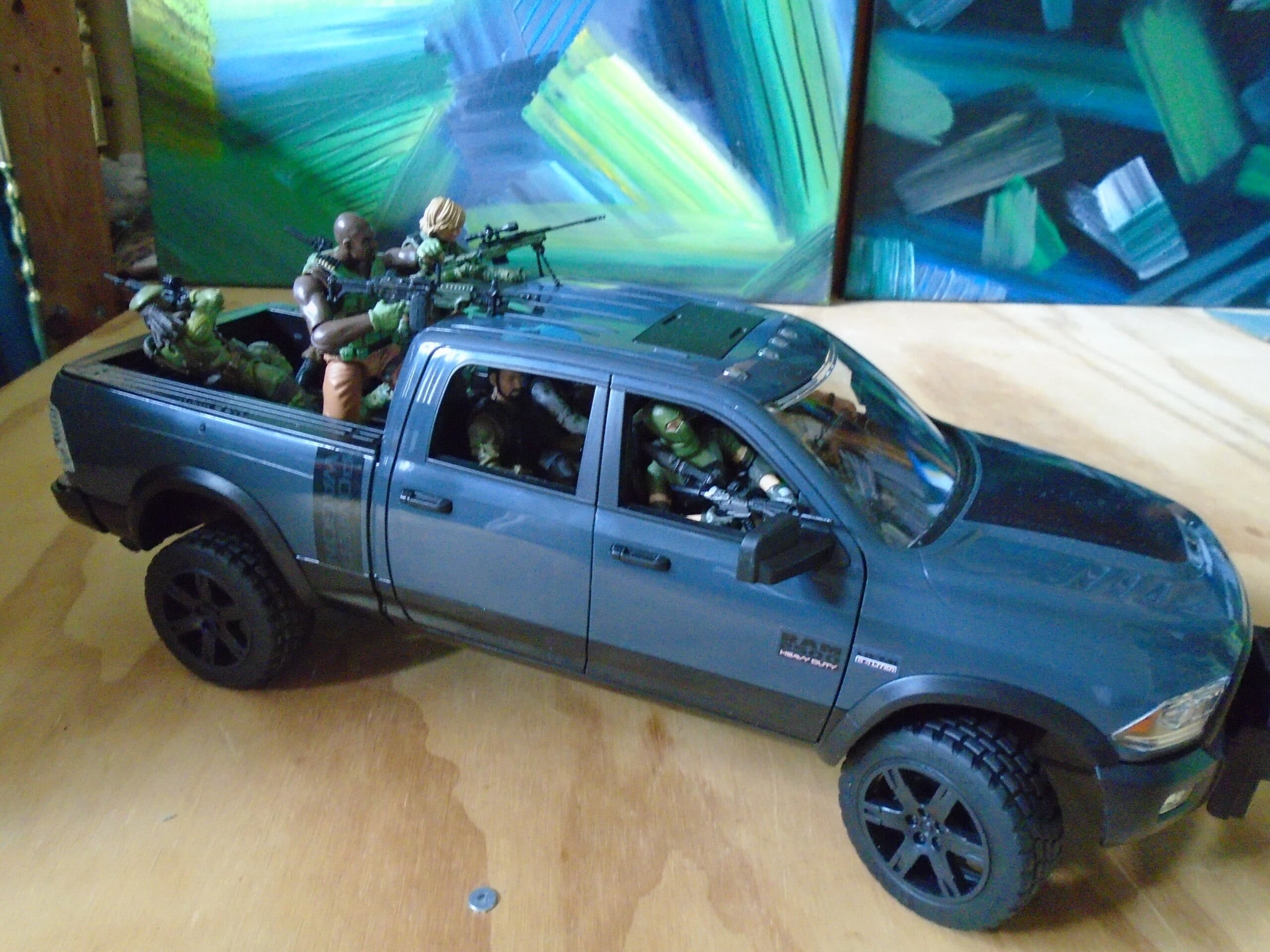 The truck is so long like holy. I've got a size comparison below. What's nice is you can fit a lot of figures into it. 5 inside and 4-5 in the back. I feel like the real pick-up truck version of this could also fit the same amount of people. Scale wise inside the vehicle, 1/18th scale figures look good. 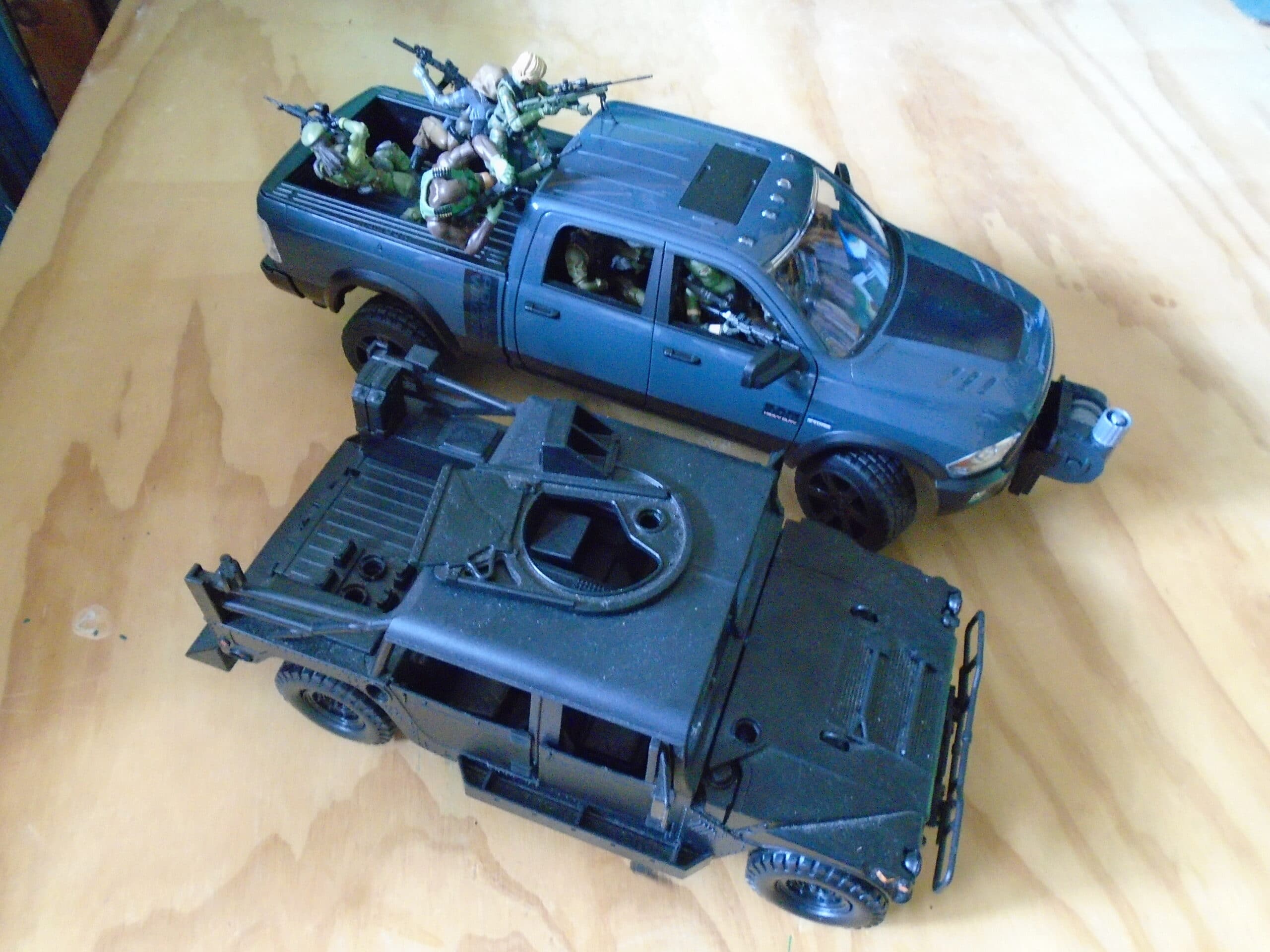 Here's a length comparison to the Humvee, so flipping long. 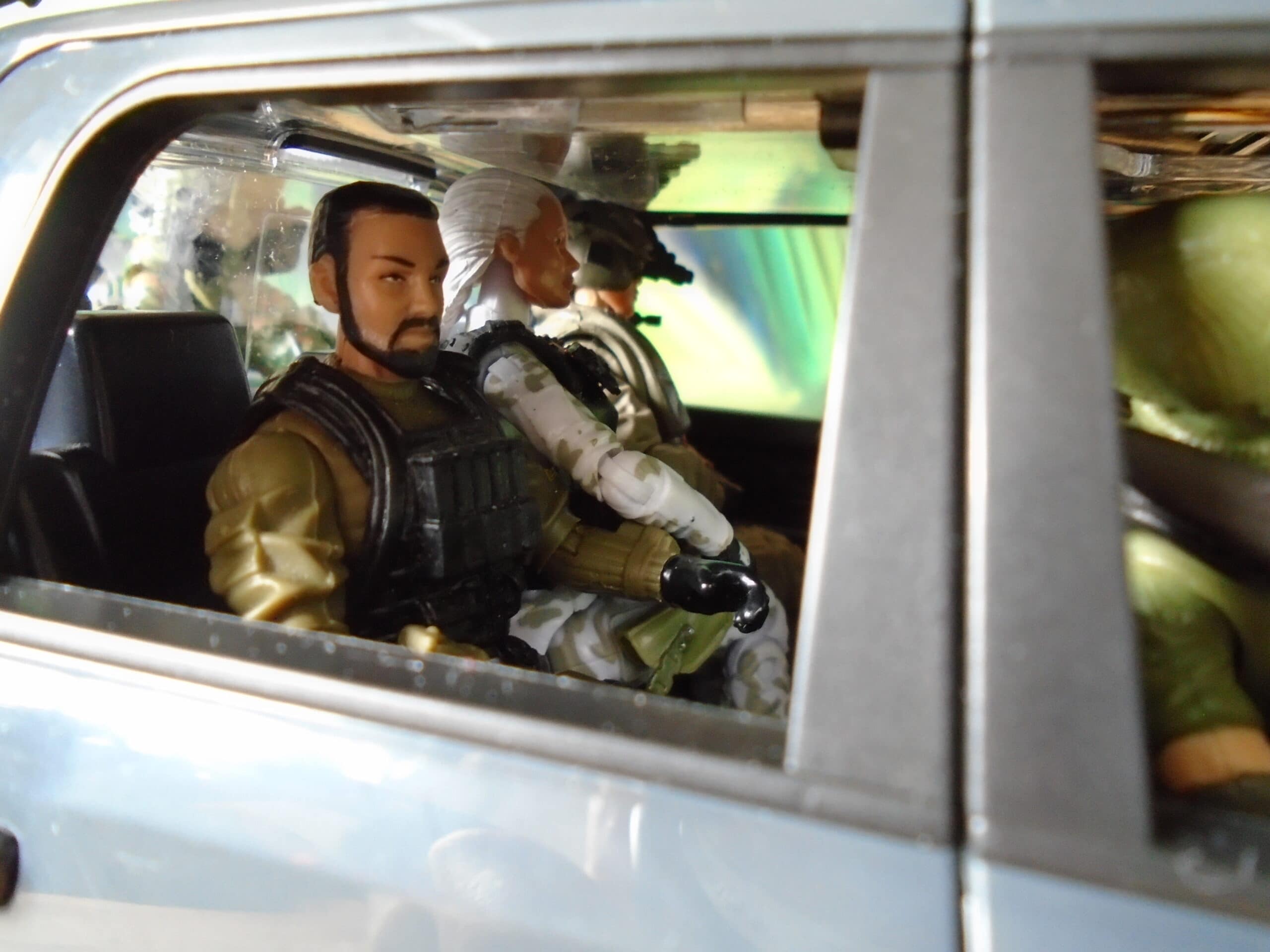 In case you didn't believe me here are three figures sitting comfortably in the backseat. This is probably my favorite part. 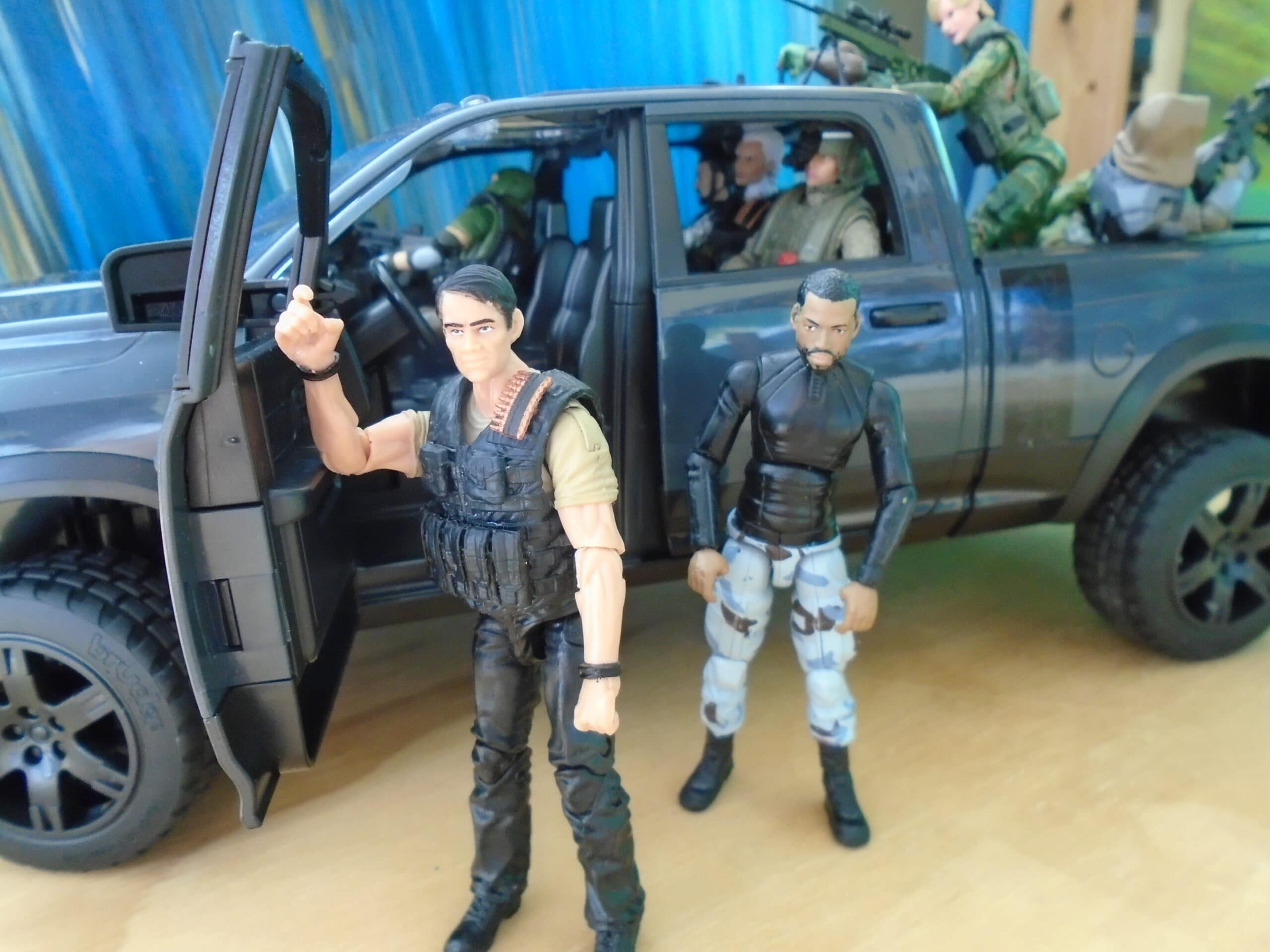 Here's some figures standing outside the truck, from this angle they do look smaller. These trucks are high up though even in real life, so I don't think this is necessarily a bad thing. 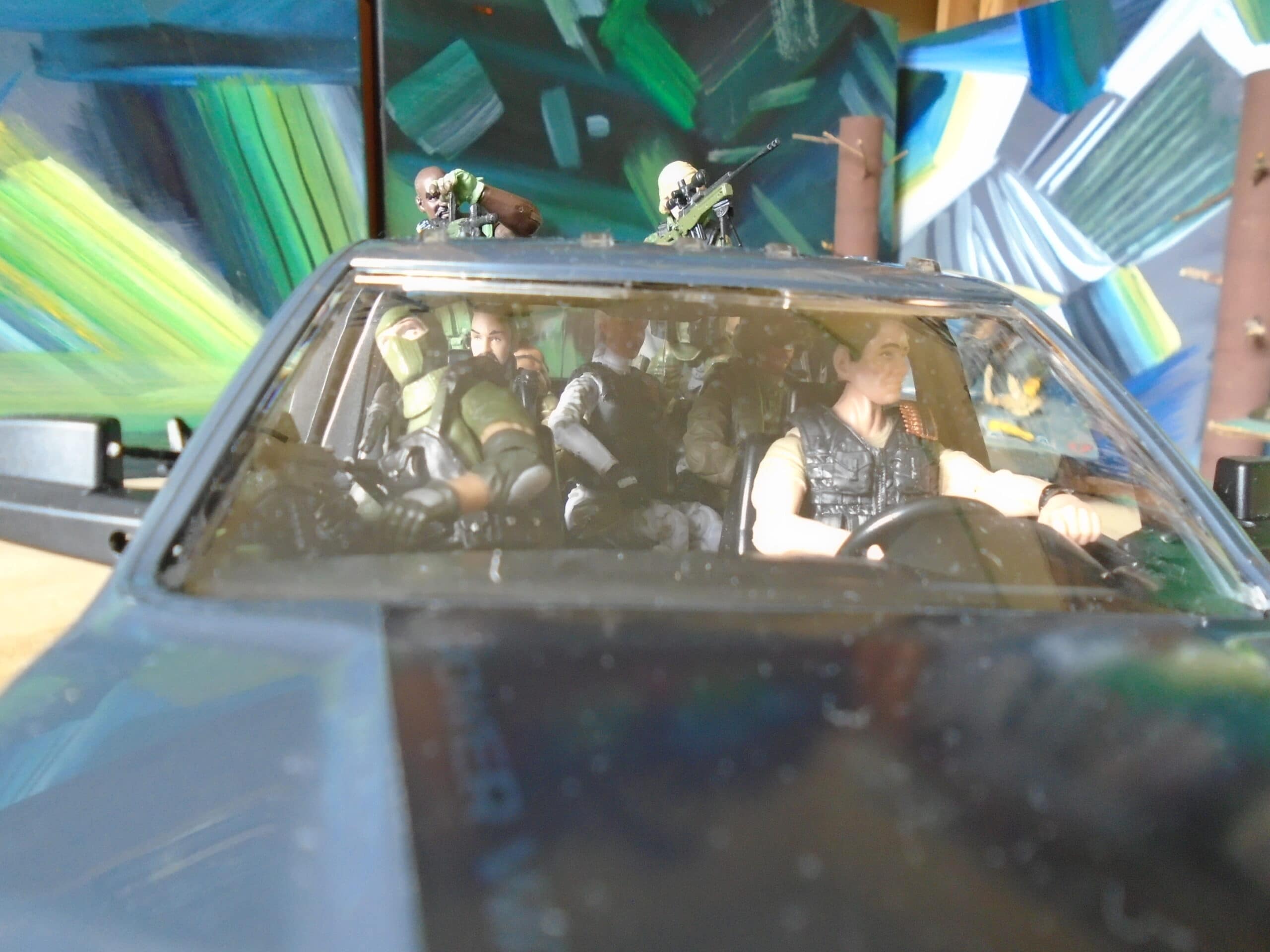 Here's a shot of the window shield. Bruder always does a good job of their windows, they are so easy to take pictures with, though you do have to watch out for the reflection. 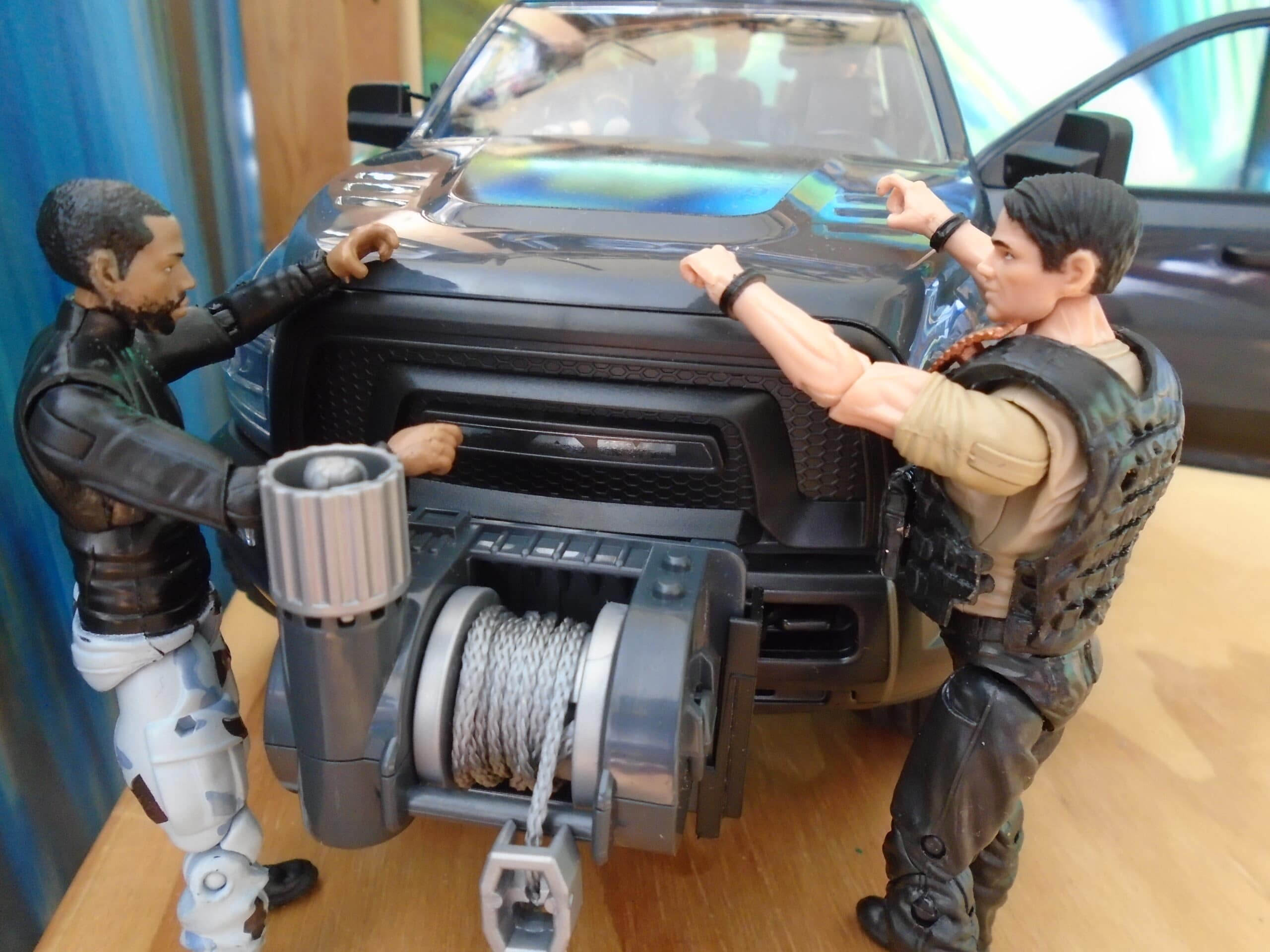 The hood reach test. So neither can get far onto the hood (which doesn't open). In real life too I think I'd need a stool if I wanted to get in there. The winch which attaches to the front is a nice little feature, though that control is bizarre you have to pop up that whole circle piece in order to loosen the rope. Then spin it when it's loose to tighten it. 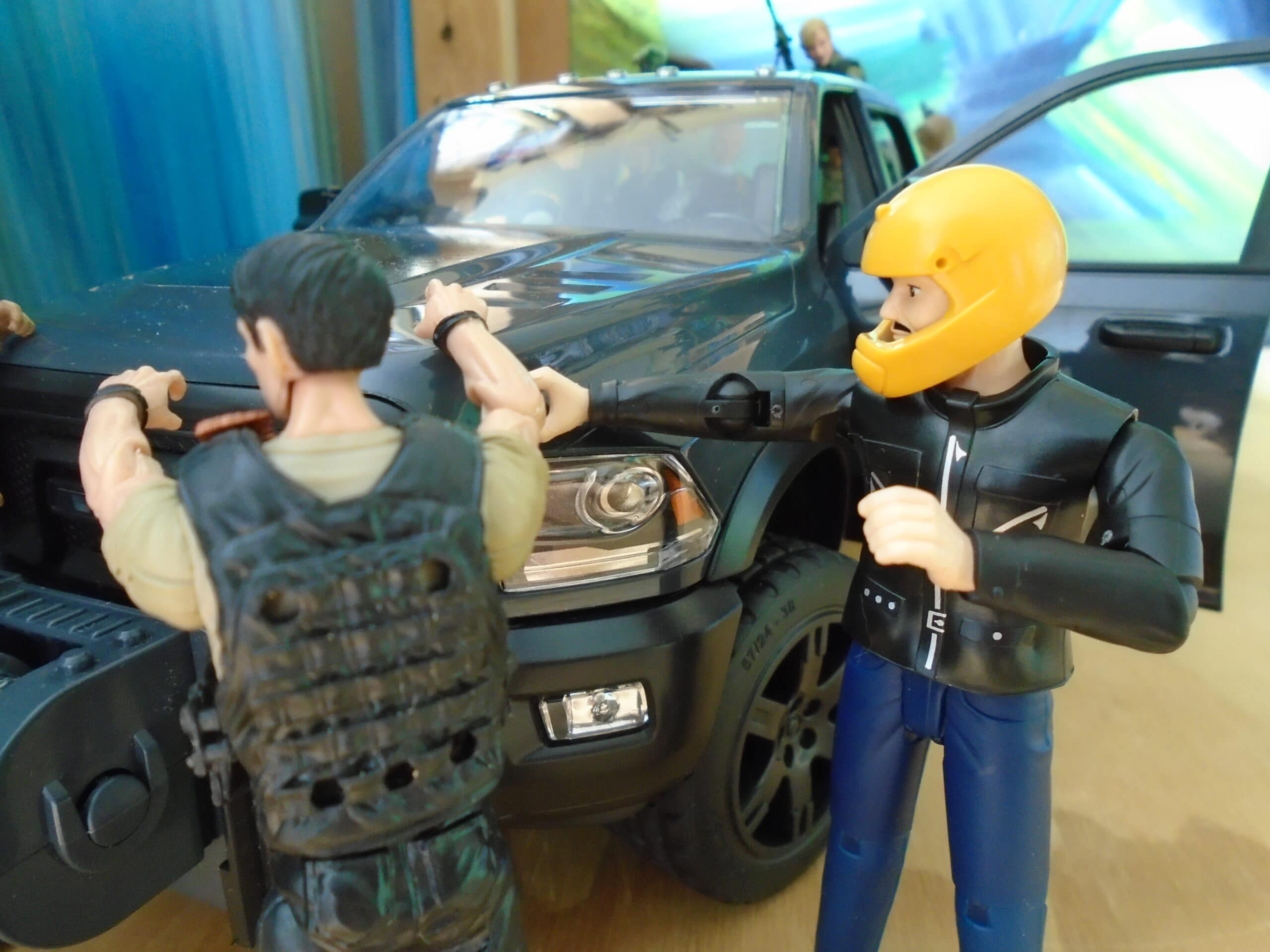 Finally here's the Bruder figure that comes with the set. He shows off that he's really not much bigger than these two. 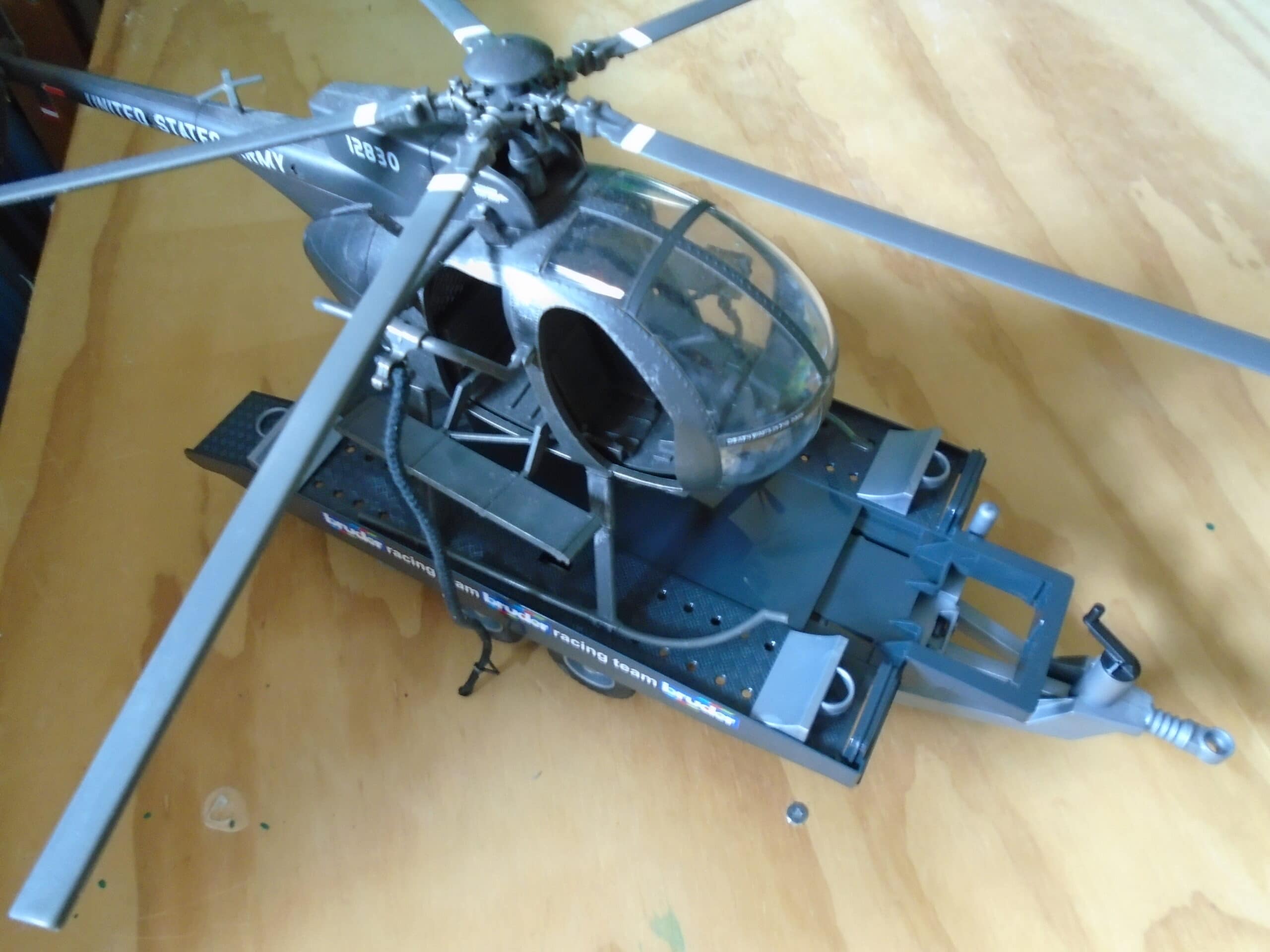 If you wanted to know if that Bruder trailer could fit a Little Bird on it, it can! This is the Elite Force model 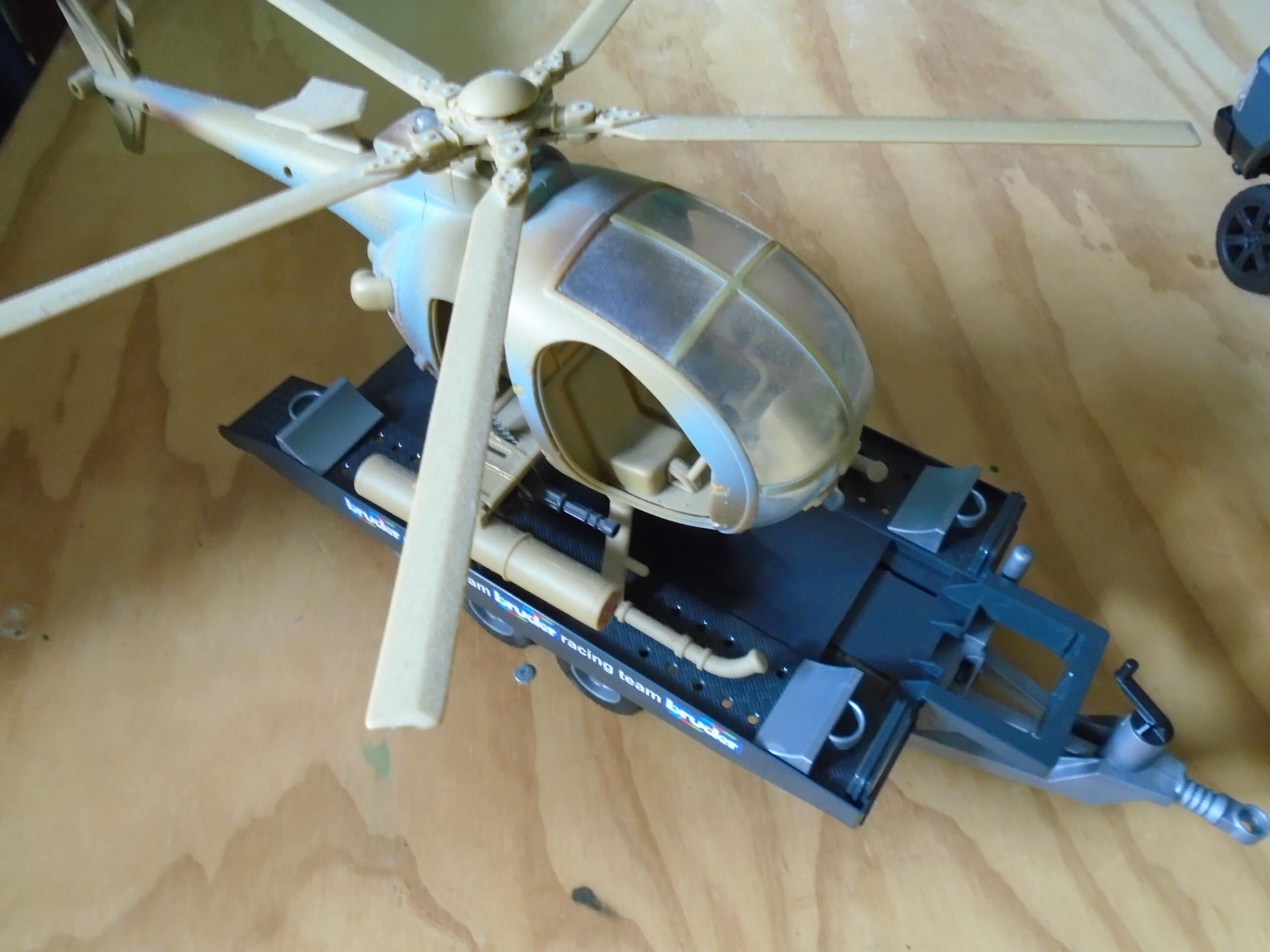 There's the Peacekeeper Elite one, which probably fits on slightly better. If you're curious to see what other vehicles might fit on there send me a message and I can check (so long as I have the vehicle of course). 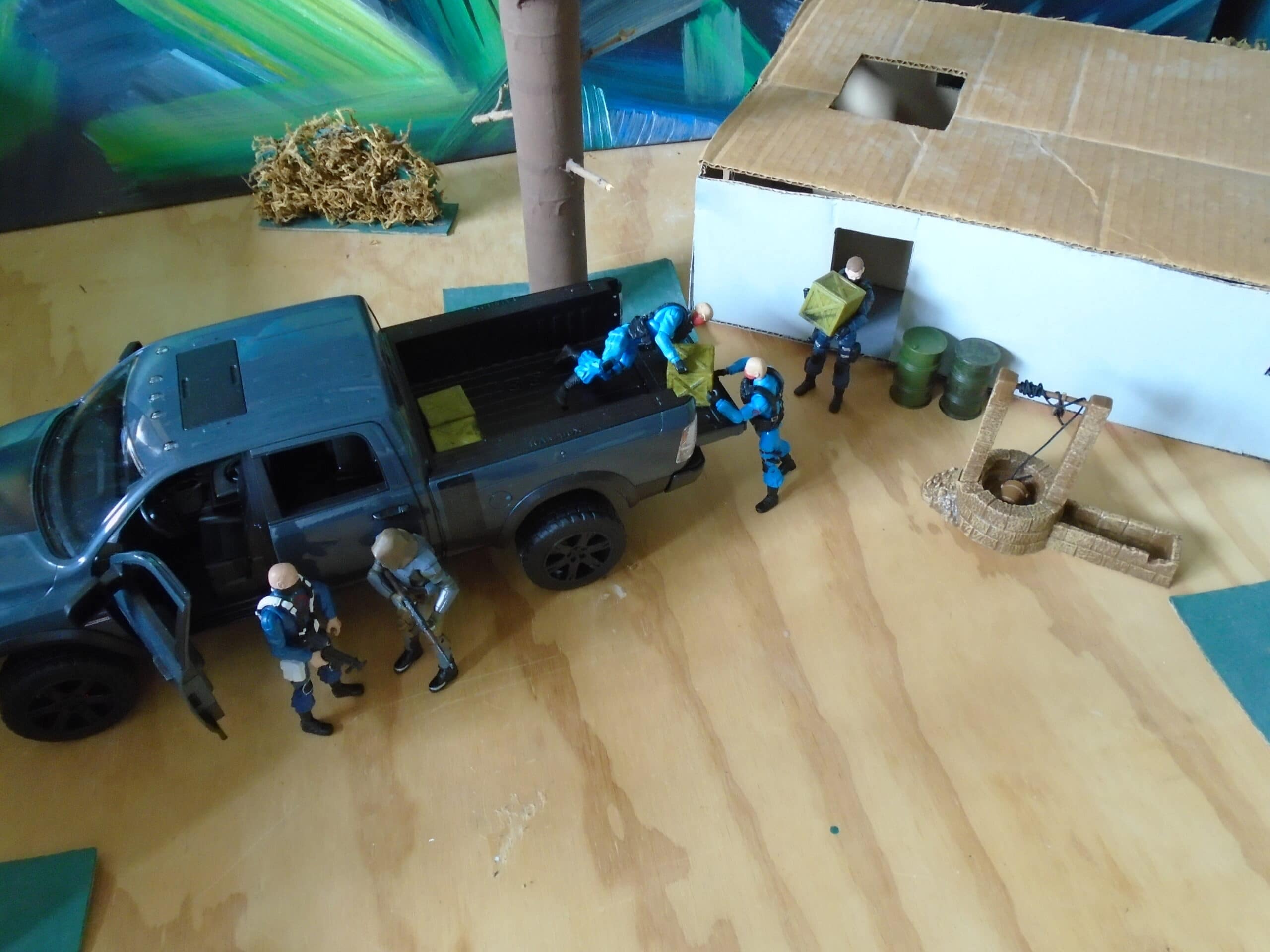 Here are some early shots for issue 19 where the Pickup truck makes it's debut. The guys are loading it from the back as you can see. I'd say it looks pretty good for 1/18th scale. 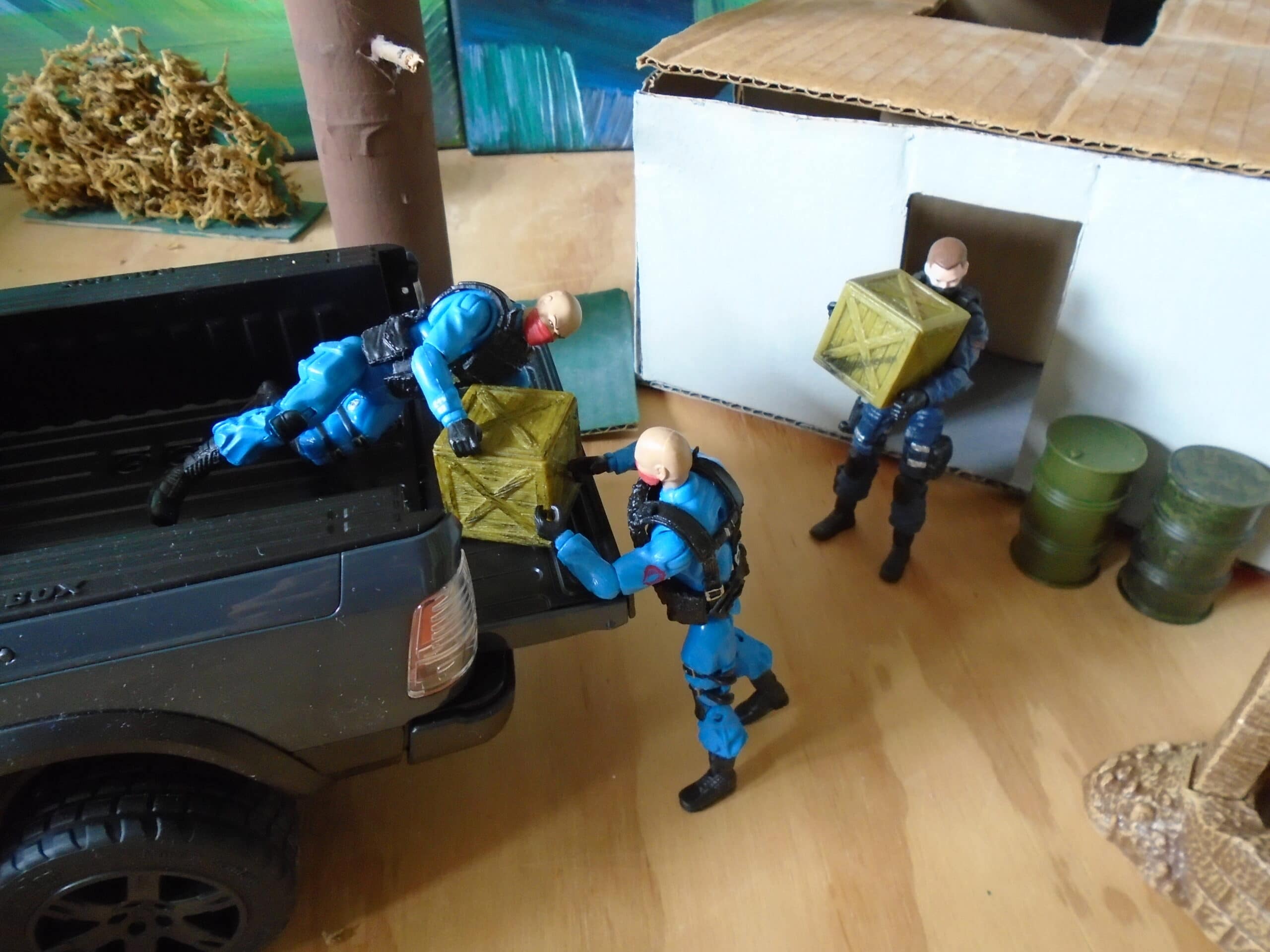